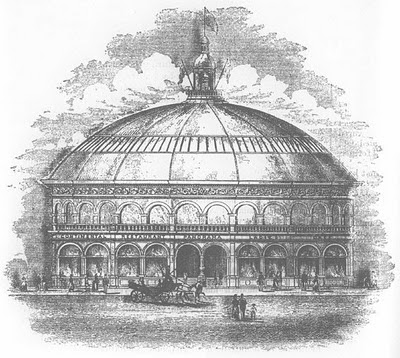 It might be asserted that the modern era of curling in Scotland began on 9 October 1895, for in that day’s Glasgow Herald there was published the prospectus of The Glasgow Real Ice Skating Palace Ltd with its proposal to turn the Panorama Building in Sauchiehall Street into a “real ice Skating Palace, such as has proved so attractive to the general public, and so profitable to the Shareholders in London, Paris, Brussels, and Munich…”

The existing building, a handsome circular and domed structure, the use of which had been to display large panoramic pictures of historical events such as the Battle of Bannockburn, was to be transformed into an ice palace to the plans of the well-known Glasgow architect, James Miller. “Should the Directors receive sufficient promises of support, an adjoining piece of ground can be rented sufficiently large to admit of the construction of a curling rink as an annexe to the building.”

The Palace opened to the public “for a short season” on 16 May 1896, for skaters and spectators, who could enjoy the music provided by a “magnificent orchestra” as well as refreshments, while watching not only the antics of the skaters but the “cinematographe”, “which may be said to create living, moving pictures…First the figure of a skirt dancer is thrown on the screen…This is followed by ‘Westminster’, a ‘Blacksmith’s shop’ in which a realistic effect is created by a man thrusting red hot iron into water, followed by rising steam, etc.” It was proclaimed that the “champion skater of the world” would give demonstrations twice daily.

On 2 June the Palace advertisement boasted that the ice was “THE TRIUMPH OF THE AGE !” and announced that as well as “skating on the most Superb Ice Surface in Europe” there would be “CURLING (TRIAL) MATCH from 9 till 11 a.m. to which all Members of Curling Clubs are invited…”

Partick CC took part in the trial. We are fortunate that their secretary, realising the historical importance of what was taking place, recorded the event:

“Eight players forming two rinks, took part in a game on this date within the Glasgow Real Ice Co.’s Skating Palace, Sauchiehall Street, Glasgow. The game lasted two and a half hours and nineteen heads were played and resulted in a win for Mr White, [President], of eight shots.. There was a beautiful sheet of ice, which was very keen, and, although the length of the rink was some yards shorter than usual (thirty yards being the extreme distance), the game was thoroughly enjoyed by players and spectators alike. This was the first game ever played in Scotland on artificial ice…”

On 11 June the advertisement for the first time solicited applications to the general manager for ice for curling, hockey, etc. On 3 July a hockey match took place.

The first season came to an end on 6 August when the Palace closed for alterations. It reopened on 27 August when it became, until the beginning of December, a vaudeville theatre. On the reopening evening and for the rest of the week patrons could enjoy:- Royal Yokahama Troupe of Jugglers; Hartz, the world’s greatest magician; Miss Lilian Lea, soprano vocalist; Clown Clemolo and Comical Monkeys; Mark Anthony, vocal comedian; The Great Bale Troupe, acrobatic bicyclists; Arpad Argyal, Hungarian sleigh-bell viruoso; Brothers Artols, gymnastic grotesques; Curtis Dalton, baritone vocalist; Mr and Mrs Dickson Moffat, society sketch; and Mr James Norrie, tenor vocalist, not to mention the Local Pictures on the cinematographe, The Gordon Highlanders leaving Maryhill Barracks, and Rothesay Pier – Steamer “Columba” , Arrival and Departure.

From December 12 until it finally closed on 1 May 1897 skating seems to have been the main business though the adverts solicited applications for curling, and there was a Grand Ice Carnival in March.

In the advert of 21 April 1897 there were announced curling matches: Port Glasgow v. Lilybank, and the next day, Breadalbane Lochearnhead v. Breadalbane Killin, to be followed by a hockey match. The last advertisement was that Wishaw would play Motherwell on Wednesday 28, and Glasgow Lilybank would play Paisley the next day.

One cannot but notice the contrast between the short, diminutive rink of the Palace and the massive, fourteen-sheeter in Chelyabinsk, Russia, where the recent World Senior championships were held.

The next public announcement was that on 1 May the Palace was closing for the season.

This was closely followed by the formal announcement in July of the voluntary liquidation of the company. The final act was the sale by auction of all the plant and fittings in November.

Glasgow and Scotland had to wait a further ten years until, with the opening of Crossmyloof Ice Rink in 1907, the modern era of Scottish curling – on artificial ice in indoor rinks – really began.

The top print shows the building before its transformation into the Glasgow Real Ice Skating Palace. It was situated in Sauchiehall Street directly below where the Glasgow School of Art now is. 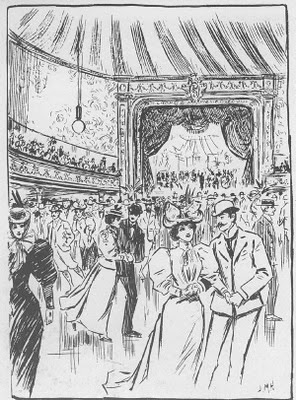 A sketch of the interior of the Palace. The circular form of the building can be seen, as can the viewing gallery above, and the orchestra in full swing.

David B Smith
Posted by Bob Cowan at 23:03 No comments: