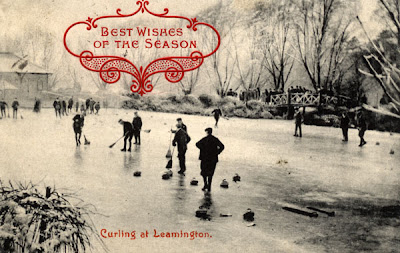 ADDED LATER: John Brown has been in touch with evidence from old photos (see here) that the location is in fact the boating pond in the Mill Gardens. These are south of the Jephson Gardens, on the opposite bank of the River Leam and were laid out during 1902 on land made available by the demolition of Oldham's Mill. They were opened in January 1903. The little bridge in the rear of the curling scene appears clearly in old photos of the Mill Gardens, for example here. This all dates the curling to sometime in the years 1903-1909.
Posted by Bob Cowan at 12:26 1 comment: