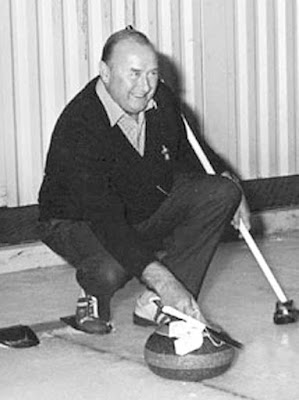 Chuck Hay, legend, died last week, aged 87. That's him in happy times on the hack at the Brora rink. You will find the World Curling Federation's obituary here, and the Royal Club's here.

Some years ago I wrote the following about Chuck and his team of John Bryden, Alan Glen and David Howie:

"Chuck Hay and his team won the Scottish title in 1965, the first of a string of successes as the team was to dominate the Scottish Championship for four years. Such success was well deserved. Hay had watched the Richardson rink with their long sliding deliveries, the takeout game with its blank ends, and the powerful sweeping. He made a conscious decision to copy the Canadian style of play. The Richardsons had impressed Hay both on and off the ice and he and his team set out to imitate them. Hay's team understood the game was all about shotmaking: the whole team had to have strength, from lead to skip."

Hay's team strived for success in the Scotch Cup, at that time the unofficial world championship. By 1967, the event has expanded to include eight countries - Scotland, Canada, USA, Sweden, Switzerland, Norway, France and Germany.

"On their home ice (at Perth), in front of their home crowd in the midst of tremendous excitement, Hay's rink curled brilliantly to beat Alfie Phillips's Canadian team in the semifinal of the 1967 Scotch Cup.

On an adjacent sheet, Bob Woods, a Canadian then resident in Sweden, skipped his Swedish side to a victory over the USA.

It was to be the first all-European final of the Scotch Cup. In the key tenth end of the 12-end final game, Bob Woods failed by a measurement with a draw which would have tied the game. Instead the Swedes went two shots down. The Scots counted a single in the eleventh, and the Swedish side ran out of stones in the twelfth. Hay, Bryden, Glen and Howie had won the Scotch Cup."

As a young University student, I was in the stands that day, an experience I have never forgotten! 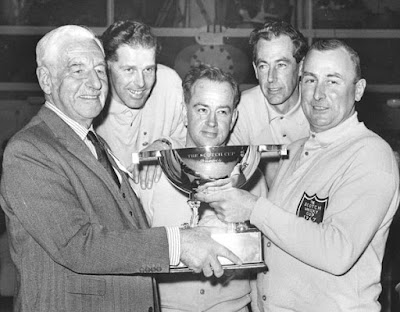 Chuck went on to many more successes on, and off, the ice in the years that followed. There's no doubt he will be well remembered.

If you will forgive me though, I want to share a personal memory of Chuck, from a few years before that Scotch Cup success. The occasion was again the Perth rink, in April 1964. I was the second player on Bill Horton's team with David Horton at 3rd, and Martin Bryden as lead. Representing the Crossmyloof rink, and our school, Hutchesons' Grammar, we won the TB Murray trophy, the national championship for curlers of 25 years of age and under. I was just 16. It was our team's first success. 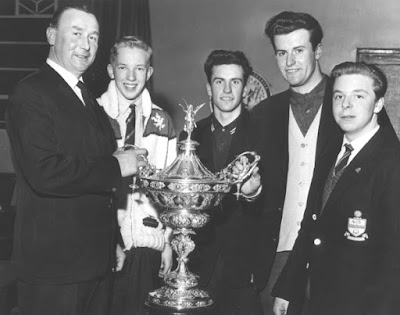 I don't think we youngsters knew back in 1964 much about Chuck Hay who presented the trophy. (Yes, the fresh faced young man standing next to Chuck is really me, proudly wearing the jumper knitted by my mum!) Next to me is David, then Bill, then Martin.

Chuck was presenting the trophy in his capacity as 'Royal Club Council Member and Scotland's most successful skip last season' according to the report in the May 1964 Scottish Curler.

We were to read in that magazine that Chuck confessed that he was surprised by the high standard of play in the final. "They all played exceptionally well," he said, "but the Glasgow boys, in addition, knew exactly what they wanted tactically and this made all the difference." This was kind. It was no wonder that three years later we were vocal supporters of the Scottish team at the final day of the 1967 Scotch Cup!

Photos are from my archive. I don't know just when the top pic was taken, or by whom. The other photos were used in the Scottish Curler magazine, although the photographers have not been credited. The old text is from Curling and the Silver Broom, by Bob Cowan, published by Richard Drew in 1985. Details of all the teams at the 1967 Scotch Cup, and the results, can be found here.
Posted by Bob Cowan at 21:33 No comments: