The Women on Rothie Pond 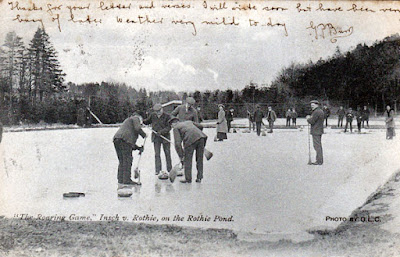 I've written already about some of the pioneering women who took to the curling ice at the end of the nineteenth, and beginning of the twentieth, centuries, see here and here. When an old postcard came up for sale on eBay earlier this year, I realised that it was of considerable significance. That's it above as I was fortunate to win it at auction. The image provides early photographic evidence of 'mixed' or, more accurately, 'open' curling in Scotland, with women playing alongside the men. I had previously written about the women curlers of Buxton, England, playing in mixed rinks, see here, and I had been on the look out for similar evidence of this in Scotland. 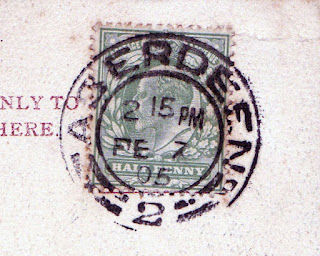 The postcard is captioned 'The Roaring Game. Insch v Rothie, on the Rothie Pond'. The photo is by 'G.L.C.'  It is not a high quality image, and the card is rather well worn, partly because it has been sent through the mail, from Aberdeen to an address in France. There are two postmarks on the reverse of the card, both showing the date of February 7, 1905. This means of course that the photograph of the curlers on Rothie pond must have been taken before this date. The latest that the action depicted could have been recorded is in the winter of 1904-05, or perhaps even before then. To my knowledge there are no earlier photos which show women curling alongside the men on Scottish ice. 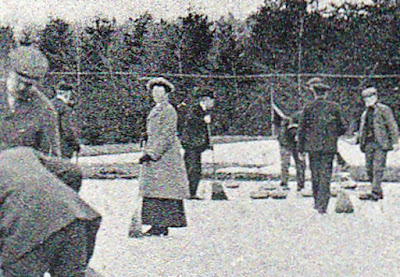 There are two women in the photo. The first is clearly taking part in one of the games, above. 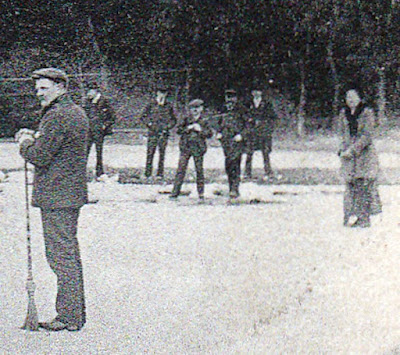 The other woman, on the right in this enlargement of the image, could be playing and awaiting her turn to sweep, or perhaps she is just watching the action. There are seven men involved, so there is every chance she is the eighth curler on that rink and is one of the players.

The significance of finding an early image of women involved in a game between two different clubs is exciting in itself, but I wondered if I could find out who they might be.

The Insch and Garrioch Curling Club was formed in 1889 and admitted to the Royal Club in 1892. Their membership lists in the Royal Caledonian Curling Club Annuals in the early years of the twentieth century do not include any women's names.

Were the women members of the Rothienorman Curling Club? Information in old Annuals suggests that the club was founded in 1905 and admitted to the Royal Club that same year. The postcard dates from before the club's admittance to the Royal Club. Rothienorman's application for membership came up at the AGM of the Royal Club held in the Royal Hotel on Princes Street, Edinburgh, on July 26, 1905. The 'Rothie-Norman (Aberdeenshire)' club was proposed by JW Learmonth, representing Merchiston and Davos, and seconded by WA Peterkin of Caberfeidh and Forres.

This is the club's office bearers as recorded in the Annual for 1905-06. 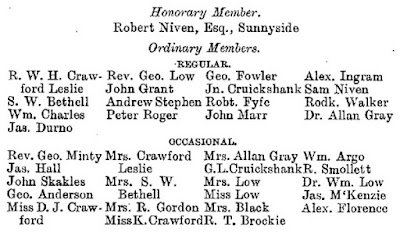 There are 647 Scottish curling clubs listed in the Annual for 1905-06. Five are women only clubs (Balyarrow, Boarhills, Cambo, Boghead and Hercules). In addition, some clubs listed lady members separately, for example Balerno (with 11 names), Braid (also with 11) and Broughty Ferry (with 31). Others listed their women curlers as 'extraordinary members', for example Edinchip had seven such. Compared with five years previously, an increasing number of clubs had one or two women members. I was interested to note that one club, Cloanden, had a female Secretary and Treasurer - Miss Nellie Cairns. But the majority of Scottish curling clubs remained exclusively male preserves in 1905.

As already mentioned, the old Annuals show the formation of the Rothienorman Curling Club to be 1905. But that date would seem to be incorrect, the Rothienorman Curling Club, and the 'Rothie Pond' being mentioned in local newspapers well before that date. Indeed, the Aberdeen Journal of Tuesday, February 21, 1893, records a meeting in the Rothie Inn 'with a view of forming a curling club'. The site for the pond had been given free, by Mrs Crawford Leslie, and she was appointed Patroness. A working committee was appointed and and over 40 members were enrolled. The Banffshire Journal and General Advertiser of February 14, 1893, had also reported on the proposal to form a Rothienorman Curling Club, noting that the site of the pond was 'within a short distance from the railway station which, to other clubs, would be a strong recommendation'. 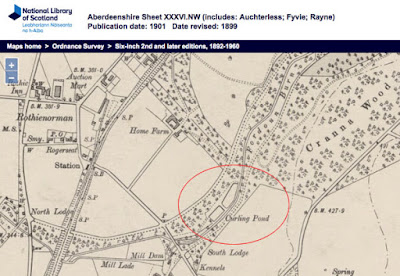 The curling pond, beside the Fordoun Burn, is shown on the Ordnance Survey map of 1901, providing evidence that the club was in existence before 1905. 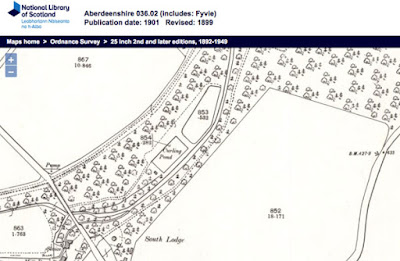 The Aberdeen Press and Journal of February 14, 1902, had this report of curling on the Rothie Pond. Note the brief mention of a game involving two female skips, a Miss Crawford and a Miss Low.

Some family history research is relevant here. Isabella Forbes Crawford Leslie had inherited the estate of Rothie and Badenscoth in 1877 when her father, Colonel Forbes Leslie of Rothie, died. She was married to Lieutenant Colonel James Henry Graham Crawford of the Royal Engineers. He had died in 1860. Isabella Forbes Crawford Leslie ran the estate from 1877 for the next twenty-seven years until her death in 1904, and it is this 'Mrs Crawford Leslie' who donated the land for the curling pond and was the club's first patroness. Her eldest son was Colonel Henry Crawford Leslie. He married in 1872 Susan Hunter, and the couple had three daughters and four sons. He died in 1898, predeceasing his mother.

The eldest of the grandsons, Reginald William Henry Crawford Leslie, married Janet Macfie Blaikie in Edinburgh on July 2, 1902. He was 29 years old, she was 22. Whilst the guests in Edinburgh celebrated, back on the estate in Rothienorman, there was much celebration too, with a grand dinner and speeches, and a bonfire on Gordonstown Hill, all reported in great detail in the Aberdeen Press and Journal of July 3, 1902. The grandmother's obituary appears in the Banffshire Journal and General Advertiser of April 26, 1904. The obituary indicates that she had been in 'delicate health' for some time. Reginald Crawford Henry had spent much of his life in Australia, returning to Scotland only in October 1901 from sevice with the Imperial Yeomanry in South Africa, and presumably was involved in running the Rothienorman estate from then, inheriting it in 1904 when his grandmother died, aged 77. The census of 1901 shows Isabella living at Rothienorman House with her widowed sister and nine servants.

It is Janet Blaikie, now Mrs Crawford Leslie, who appears as the Patroness of the Rothienorman Curling Club and is listed amongst the members when the club was admitted to the Royal Caledonian Curling Club in 1905. She would have been 25 years old then. She seems to have been a keen curler, her name appearing amongst the club's members right up to the beginning of WW1. Reginald Crawford Henry died in 1916, and Janet remarried, to Alexander Gordon Duff, in London in 1917.

Two of the other women who were members of the Rothienorman club in 1905 were Reginald Crawford Leslie's sisters, who must also have been resident at Rothienorman House, or on the estate, at this time.

One of these sisters, Dorothy Isabel Crawford, married Alexander Forbes Irvine of Drum in July 1905. A deputation (Dr Gray and James Durno) from the curling club met with the bride to hand over a carriage clock as a wedding present. This is recorded in the Aberdeen Press and Journal of July 19, 1905, which says, "The deputation expressed their pleasure at her frequent visits to the curling pond. Her appearance there had always been much appreciated by the members. They asked her to accept the gift as a mark of respect and esteem, accompanied with hearty best wishes for herself and Mr Irvine. Miss Crawford, in reply, cordially thanked the deputation for their kindness and desired them to convey an expression of her thanks to all the other members of the club. She had always taken a great interest in the club, and hoped to remain a member of it. She would never forget the many happy days she had spent with them, and she hoped to spend many more."

It is interesting to speculate if Dorothy was able to continue her interest in curling as a married lady.

It is hard to imagine anything of the lives of curlers in the nineteenth and early twentieth centuries, least of all the pioneering women. The discovery of an old postcard has provided just a small insight. The two women shown on the ice were members of the Rothienorman club. Which of the nine women in the club's membership were they? We know now that three of these nine were young women, in their twenties, and that was a surprising find. There's much more to be uncovered of course. Who were the other six women listed in the 1905-06 Annual? Would that the minutes of the Rothienorman Curling Club had survived! 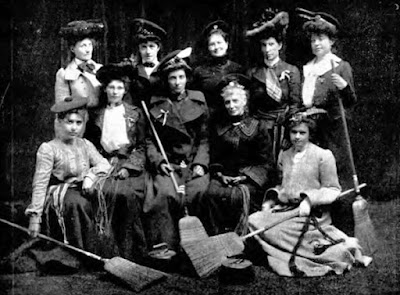 By 1905 women were making inroads on curling ice in other countries too. This wonderful photograph of the St Lawrence Ladies' Curling Club in Montreal appears in the 1905-06 Annual and illustrates just how big a foothold the women there had on the sport, and how they were keen to publicise their efforts. And in Switzerland too, where more and more British people began to take winter holidays. The men could play curling, and it would be unsurprising if wives and daughters did not also take to the ice. This they did ... more about which in a future article.

The postcard images are scanned from the original card in the author's possession. Map images are from the NLS Maps website here. The extract of the Aberdeen Press and Journal is © the British Library Board via the British Newspaper Archive. Scans of entries in the 1905-06 Annual, are from the author's copy. The photo of the St Lawrence Ladies is by Knox, Montreal.
Posted by Bob Cowan at 09:18 No comments: