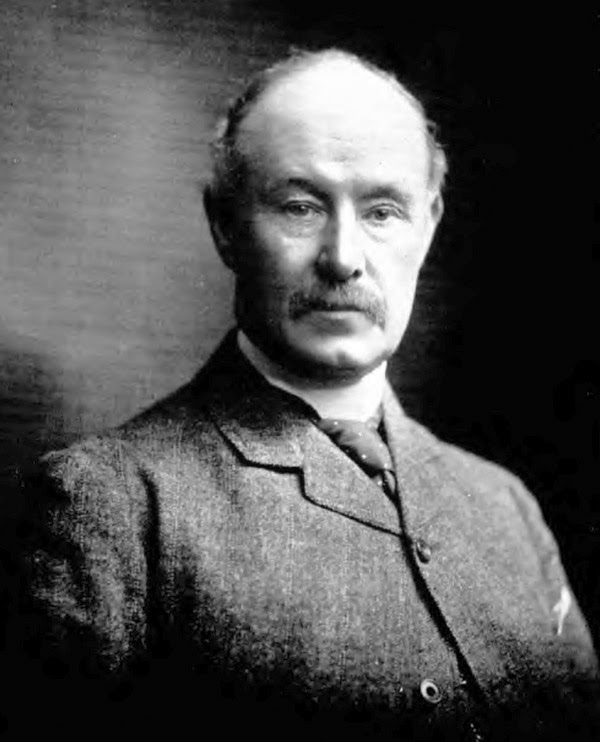 In a previous post (here) I wrote about Lady Henrietta Gilmour, a pioneer of women's curling in Scotland at the end of the nineteenth century. In this article we move forward to the season of 1912-13. Her husband, Sir John Gilmour, above, has just completed his year as President of the Royal Caledonian Curling Club. Although suffering from rheumatism, he still curled at Montrave whenever he could.

Sir John had wished to present a trophy to commemorate his year as Royal Club President. It was suggested that he might consider presenting a trophy for women's play. Hence at the Annual Meeting of the Representative Committee of the Royal Caledonian Curling Club on Thursday, July 24, 1913, in St Margaret's Lecture Hall, Dunfermline, the following was announced:

"Sir John Gilmour, as President, should present to the Royal Club a Trophy, value £25, open only to the Lady Members in Scotland and England. The Match to be played either in the open or in an Ice Rink. The Trophy if won three times by the same Club, not necessarily in succession, becomes the property of the Club. The further conditions of play are to be fixed by the Council of Management of the Royal Club."

In addition, "Lady Gilmour, wife of the present President, who is a Canadian lady and has always taken the greatest interest in the game of Curling, and especially in Canada, desires also to present a Trophy to the value of £25, to be played for by the Lady Members of the Royal Club in Canada. The terms to be the same as above. In presenting these Prizes both Sir John and Lady Gilmour have in view the hope that as a result, greater interest may be taken in the game by ladies."

Was £25 a large sum in 1913? Using the Bank of England's Historic Inflation Calculator, here, £25 back then would be the equivalent of approximately £2,500 today. Donating two such trophies was generous, certainly.

The first competition for the Sir John Gilmour Cup was played at the Haymarket Ice Rink in Edinburgh, January 21-23, 1914. Eight teams took part in a straight knockout format.

Provost Husband of Dunfermline presided at a luncheon for the competitors, recognising that it was the first time that a competition for the women had been played under the auspices of the Royal Caledonian Curling Club. 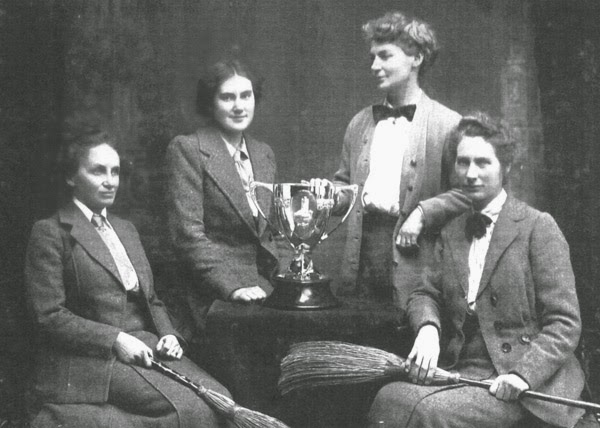 All those involved in curling in January 1914 could not have imagined the horrors of war that were to unfold in the years ahead. It was not until 1925 that the competition for the Sir John Gilmour trophy was held again at Haymarket. Balerno won again, the team skipped by Miss Brodie with Mrs Menzies, 3rd, Mrs Sang, 2nd, and Mrs C M Cowan, lead. Only three clubs took part - Balerno, Edinburgh Ladies, and Hercules Ladies.

By the regulations, that third win allowed the Edinburgh Ladies club to keep the trophy.

The Royal Caledonian Curling Club had already considered what should be done if the Gilmour Trophy was won outright. At the Annual Meeting of the Club on Wednesday, August 3, 1927, in the Central Station Hotel, Glasgow, Andrew Henderson Bishop offered to present another trophy to encourage women's play. He carried through with this offer. The Ladies Challenge Trophy which he presented was first played for in 1929 (and won by Mrs Crabbie with her Edinburgh Ladies team) continues to be played for today as the premier ladies' event in Scotland, aside from the Scottish Championship.

What happened to the Sir John Gilmour trophy? In 1970, it was re-presented by the family of Mrs J E Crabbie to the Edinburgh Area of the Ladies Branch of the Royal Club for annual competition. It now goes, appropriately, to the winners of the Edinburgh area playdowns for the Henderson Bishop competition. 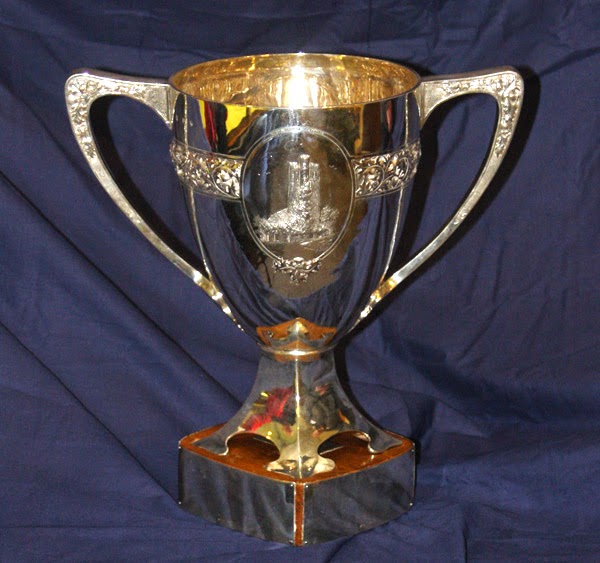 That's the trophy above. One side of the trophy has an image of Lundin Tower. The other says, "Presented by Sir John Gilmour Bart, President RCCC 1912-13. To be played for by all lady members of all local clubs connected to the Royal Caledonian Curling Club in Scotland and England and to become the property of any such club winning it three times (not necessarily in succession)." 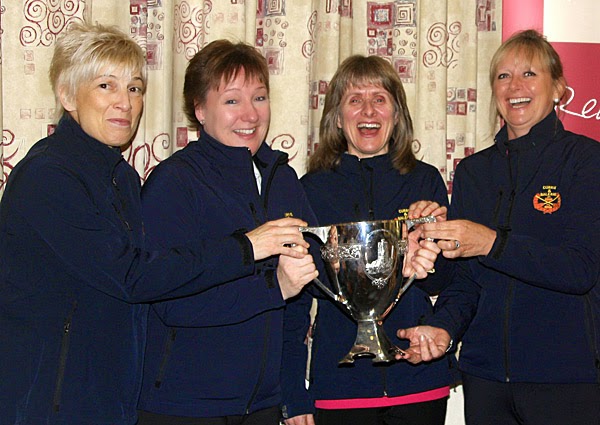 This season it was won by Jenny Barr and her team. That's them above with the trophy, (L-R) Fran Stretton, Jenny Barr, Morna Aitken and Susan Kesley, on December 4 last year. They will now take part in the Henderson Bishop finals at Kelso in February.

But what happened to Lady Gilmour's trophy that went to encourage Canadian women's competition? It was played for in the 1913-14 season by eight clubs, with the Heather CC defeating Montreal in the final 18-11. The trophy is still played for ...  but as a mixed competition, see here on the Quebec curling website. One has to assume that it was won outright at some point, and then re-presented. Its history remains to be unravelled. Can you help?

Added later: I've discovered that Robin Welsh talked about the Gilmour trophies in Scottish Curler magazines in 1986. Apparently, Lady Gilmour's trophy which went to Canada was won three times by the Montreal Heather Club, and that club got to keep it in their trophy cabinet. The March 1986 Scottish Curler printed this information from the Canadian Branch of the Royal Caledonian Curling Club: "No doubt, when the Heather Ladies moved on to become the St Andrews Ladies of 1920-21, they took their trophies with them. At some point, between then and 1939-40, the St Andrews Ladies gave the trophy to the Canadian Branch, probably in their first year of 1935. It is known that the trophy was used in connection with the wonderful Charity Bonspiels of 1920 to 1932 and later became the second flight trophy of the Royal Victoria Jubilee Competition. It is now the main trophy of the Canadian Branch Mixed Championship. It may well be the only important trophy ever competed for by ladies, gentlemen and mixed rinks."

What is the 'Canadian Branch'? See here, and follow the interesting 'Branch History' links on that page. What happened to the 'Lady Gilmour' trophy? That is succinctly stated here.

The top photo of Sir John Gilmour is from the Royal Caledonian Curling Club Annual for 1912-13, by Lafayette, London. The photo of the first winners of the Sir John Gilmour trophy was by Balmain, Edinburgh. It was used on a greetings card published by the Edinburgh Curling Club on the occasion of the club's centenary in 2012 and entitled 'Early Haymarket Curling'. This image is what is reproduced here. The other photos are by the author. Thanks for help go to Robin Copland who first drew my attention to Balerno CC's success, see here. Also to Jenny Barr, Debbie Kerr and Iain Baxter at Murrayfield, and Barbara Watt.

Postscript. What happened to the Gilmour family? Sir John Gilmour died in 1920. He was succeeded by his eldest son, Lieutenant colonel John Gilmour DSO, who was MP for Pollok and became Secretary of State for Scotland in 1926. Lady Henrietta died on January 2, 1926, having outlived her son Harry only by some days. He had been wounded in the Boer War, and died on December 24, 1925. The Gilmour's youngest son, Douglas, was killed in WW1, at 26 years old, serving with the 7th Seaforth Highlanders. Netta Gilmour married Captain R W Purvis in 1904. Maud Gilmour married James Younger in February 1906.
Posted by Bob Cowan at 10:22 No comments: