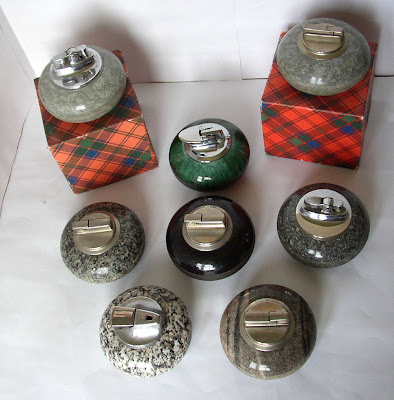 I recently wrote about the wonderful variety of table lighters which the game of curling had spawned, see here. This second piece on the topic concerns a newer and more conventional design, namely the miniature curling stone. In these the body of the stone is generally turned from real stone. In the top has been cut a circular hole into which is fitted the actual lighter. As one would expect the common types of curling stone metal are used but a large proportion of those which I have seen are made from rare and uncommon rocks, which are difficult to identify and name.

I will briefly describe the lighters in the illustration. These are described from left to right and from top to bottom. Clicking on the image will open it at a much larger size in a new window.

1. Blue hone Ailsa Craig stone, made by The Scottish Curling Stone Co., Ltd. In its original cardboard box of Red Robertson tartan, appropriately for the company was part of The Robertson Group of companies. Lighter: made by Rolstar, England.

3. Pottery with green glaze, no maker’s name or mark. I wonder if it is by Rainbow Pottery, Ingleside, Canada, a company which made, inter alia, pottery curling stones from ca. 1972 until 1990. Lighter: made by Ronson, Woodbridge, N.J., U.S.A.

4. Granite, perhaps from Aberdeenshire, no maker’s name or mark. Lighter: made by HB., West Germany.

7. Unidentified stone, no maker’s mark or name. Lighter: Ronson, made in England.

Six of the stones have striking bands. Nos. 3 and 7 do not.

Since it is unlikely that table cigarette lighters in the form of a curling stone - or anything else - will ever be made again, it may be that this is an area for the curling collector who wishes to collect not just for the love of the game but for investment!

Curling Memorabilia on Flog It 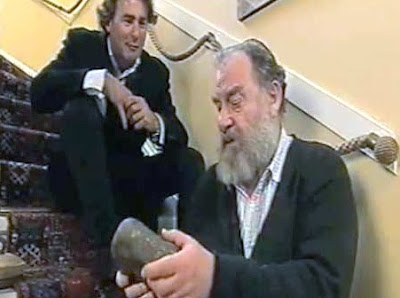 BBC's Flog It programme broadcast a segment in 2005 with presenter Paul Martin being shown some of David B Smith's collection of curling memorabilia. Click here, or on the image above, to watch. The YouTube clip is around six minutes only.

The screenshot shows David explaining to Paul what a loofie is!
Posted by Bob Cowan at 18:12 3 comments:

In its heyday the custom of smoking was all-pervasive. For many a decade no film star could be photographed without a lit cigarette between first and second fingers.

The paraphernalia and accoutrements which served this habit were legion; and often they were decorated with emblems of the many sports and pastimes enjoyed by smokers.

Not least of these was the cigarette lighter. Even the comparatively humble pocket lighter was often embellished with the picture of a curler - to gladden the curler’s eye.

More impressive, however, was the table lighter, too large for the pocket, and designed to be handed, or slid, around the dining, or, perhaps, the club table.

The picture above displays five of these from my collection. (The punchbowl and the curling stone merely form an appropriate background.) 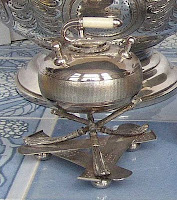 The oldest is the second from the left. It is of a fairly common design in silver plate, THE emblem of the game, the stone, held aloft on a trio of brooms and crampets. What is unusual about this design is the three little knobs which protrude from the top of the stone. One of them is different from the others in that it appears to have a sort of wick just emerging from a hole at its top. All three can be removed from the top of the stone. When the top of the stone itself is removed all is clear. The body of the stone is a receptacle for oil of some sort, the wick dangles into the oil; it can be lit when the stone is closed and left burning 'on the peep'; the other two contain at their inner ends enough fibrous material to hold some of the oil; when removed from the top of stone and applied to the burning wick they ignite and can be used to convey fire to the smoker’s cigarette or cigar. This is the only example of this type of light that I have ever seen.

The most recent is the rectangular dark blue plastic model with elegant depiction of house, broom and stone. It is a Ronson SociaLite, made in Canada.

Second from the right is a fairly sturdy model about which little needs to said except that they appear to be offered for sale on the internet quite commonly.

The remaining two are variants of the same design. The metal castings of the curler in the act of delivering his stone are very similar but in one he is enclosed in a hollow tube of transparent plastic and in the other he is engulfed in a solid lump of it.

These two, which were made in Japan, still have attached to them the small label which no doubt enabled the traveller to do his best sales pitch to his tobacconist customers.