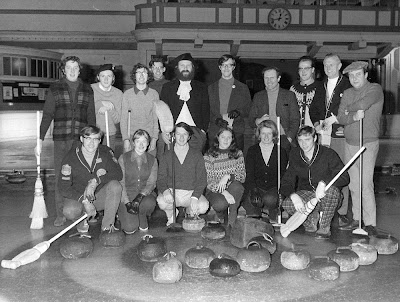 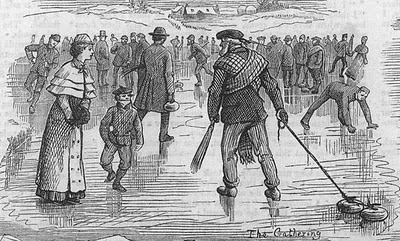 The magazine Funny Folks that ran from 1874 until 1894 commenced a series of humorous pieces in February 1886, entitled The Widgerys at Breakfast.

Mr Widgery usually began by mentioning something he had just read in the morning paper, and Mrs Widgery at once began to misunderstand him. Some such topics were 'billiards', 'hare and hounds', 'football' (she, of course didn’t understand ‘dribbling’), 'the new German Diet' (which she thought was about food and not politics).

Curiously the very first of the series involved Mrs W’s failure to understand the game of curling. She can hardly have been the only English citizen who did not understand the pastimes of her northern neighbours.

"Capital curling match they've just had in Scotland," remarked Widgery, with his eyes on the sporting column and his feet in the coal scuttle. "Should like to have been there."

"La!" said Mrs Widgery, handing him the toast, "I didn’t know curling was in again. Were the competitors regular hairdressers, or only ladies’ maids?"

"Curling, my love," returned Widgery, putting down the paper and bracing himself up for the inevitable, “in this connection has nothing whatsoever to do with feminine coiffure, but is one of the national pastimes of Scotland, and it has the great advantage over many other sports that it is bound to be a straight game, and - "

"Don’t quite see what, dearest?"

"Why, how it can be such a very straight game if it’s curling!"

After a savage bite at his toast, Mr. W. benignly proceeded:

"I’ll just give you an idea of the pastime. My love. You see – a bonspiel, as a match is called –"
"I see," jerked in Mrs. W. "Bonspiel. That’s Scotch for spills; but we don’t call ‘em matches because they don’t have any brimstone on the tips."

"I was speaking of a curling match, darling, not pipe-lights or Lucifer matches," explained Mr. W., blandly. "Curling is played in a rink with a pair of curling stones –"

"Oh, not a pair of curling irons, then," trespassed Mrs. W. once more. I should have thought –"

"La! How funny; I didn’t suppose stones could be curled, anyhow."

Widgery looked more than half inclined to kick the cat, but with an effort he swallowed his pride, and refrained. 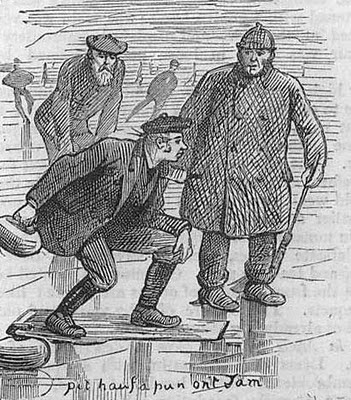 "Well, poppet, the players, all having crampets on their shoes –"

"Crumpets in their shoes!" echoed Mrs. W. "Well, I never heard of that before. To be sure,” she continued, contemplatively, “they’re softer than muffins would be, and “ –

“No, dearest; I said crampets. Crampets are little spikes to prevent slipping on the ice.”

“Oh, I see now, it’s (s)pikelets you mean, then, isn’t it?” was his better half’s triumphant solution of her puzzle.

“Oh, they hold their pig-market there, then. I’ve read of hogs sold by the score” –

“No, no, dearest, the hogscores are marks upon the ice, drawn at a certain distance from the tees” –

“What do they let a tease be there for? Isn’t he likely to interrupt the play?”

“No, pet, the tees are the centres of the rinks. Well, then each side has a skip” –

“Why, then, they must play at something like hop-scotch.”

“Not at all, child, there’s no resemblance whatever.”

“But they skip in hop-scotch, and hop and jump too,” insisted Mrs. W.

“In curling, a skip is a sort of judge,” he explained. “Well, then, the players whose stones are best soled – “

“Do they get a good price for them?”

“Get a good price for what, darling?”

“Why, for the stones, when they’re sold?”

“No, ownest, when a stone is well played, it is said to be soled – understand?”

“Oh, yes, now, of course. Then there’s never any occasion to have them heeled as well as soled, I suppose.” 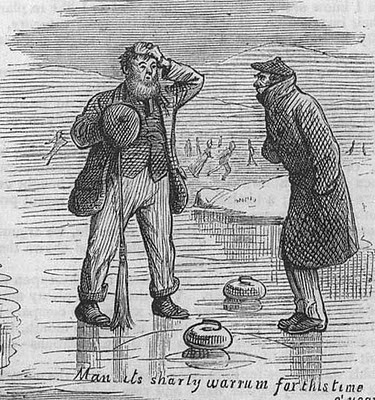 Widgery felt a sort of sinking sensation at the pit of the stomach, nevertheless, after an attack on the coffee and toast, he proceeded:

“Exactly,” acquiesced W., beginning to glare. “Well, then, you see, each side does its best to cut the other out, as it’s called.”

“I see; then there’s cutting as well as curling going on?”

Though Widgery secretly gnashed his teeth, and felt his pulse under the table, he suppressed himself, and continued, as if he liked it:

“Yes, pet, and a good curler’s a bit of a twister too, I can tell you. By the way, there’s one thing about curling, the players being on the hard rink all the time” –

“Oh, the hard drink! How dreadful!” said Mrs. W., horrified. “That’s the worst of men; they can’t get together for ever such a little time without having too much of these horrid stimulants.”

“Why, oh, well, because it’s symbolical of fare play, I suppose, sweetest. Hell! There’s my ‘bus.”

And he was out of the house and clambering up to his seat beside the driver almost before he realised that he had left the room without bestowing upon her the customary salute.

Almost contemporary with The Widgerys at Breakfast these woodcuts appeared in The Graphic of 7 February, 1880.

Click on the graphic to see a bigger size.
Posted by Bob Cowan at 12:24 No comments: