Charles Doyle, the father of Sir Arthur Conan Doyle, was an accomplished artist, member of a family of accomplished artists. His father was a hard-headed political cartoonist, John Doyle, each of whose publications was eagerly awaited by queues of devotees in the street outside his London publisher’s.

Charles and his brother Dickie drew and painted in a wide variety of styles. For some reason both brothers developed a penchant for depicting fairies. Although Charles created quite a number of lively curling scenes he was not always successful in keeping fairies away from them. In John Kerr’s History of Curling there is an end piece by Charles which consists of a fey young lassie speeding over the ice, her diaphanous stole billowing behind her, apparently standing barefoot on the handle of a curling stone. She is said to be The Spirit of Curling. 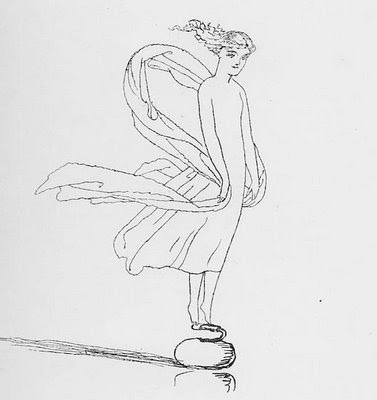 The same young lady appears on a New Year card by him in water colour. 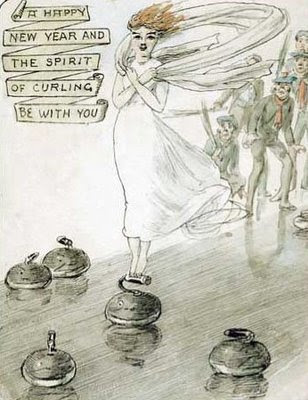 Against this background I thought it might be apposite to place a couple of mentions of actual fairy curling.

Robert Heron, in his Observations made in a Journey through the Western Counties of Scotland in the Autumn of MDCCXCII, which was published in Perth in 1793, writes of the beliefs of the people around Gatehouse of Fleet: “The Fairies are little beings of a doubtful character, sometimes benevolent, sometimes mischievous: On Hallowe’n and on some other evenings, they and the Gyar-Carlins are sure to be abroad, and to stap those they meet and are displeased with, Full of butter and bear awns; In winter nights they are heard curling on every sheet of ice…”

The next comes from the pen of James Hogg, The Ettrick Shepherd, friend of Scott and Christopher North, and very keen curler. I have mentioned it in a former Scottish Curler.

In 1807 he published The Mountain Bard, a small book of Borders stories and legends, turned into ballad form by himself, and accompanied by notes. From a note on the ballad, Willie Wilken, a famous warlock, comes the following:

Willie Wilkin’s funeral procession was interrupted by the arrival of two dreadful bulls, each of which “put each of them one of their horns into the (ropes) of the coffin, and run off with the corpse... and when after many miles, they came to Loch Ettrick, on the heights of Closeburn, the bulls were seen to plunge into the lake with the corpse.”

“He was, when alive, very fond of the game of curling on the ice, at which no mortal man could beat him; nor has his passion for it ceased with death; for he and his hellish confederates continue to amuse themselves with this game during the long winter nights, to the great terror and annoyance of the neighbourhood, not much regarding whether the loch be frozen or not. I have heard sundry of the neighbouring inhabitants declare, with the most serious countenances, that they have heard them talking, and the sound of the stones running alongst the ice and hitting each other, as distinctly as ever they did when present at a real and substantial curling.”

The spirit of curling had another and perhaps final outing in a poem composed by W A Creelman for his book, Curling Past and Present, published in 1950. The author was a member of Sydney Curling Club, Nova Scotia, a Canadian, who nonetheless wrote his wee poem in quite broad Scots. 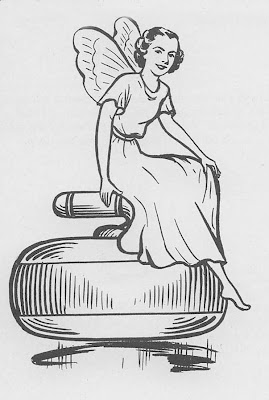 The title of the poem is, curiously, The Spirit of Curling.

On the sheen o' THE GRIP a wee sprite frae the air
Rides awa down THE ICE wi' her hear a' aflame
In the path o' the wind gleams the goud o' her hair
Wha is she? Mon, Mon, she's the SOUL O' THE GAME.

She sway and she swings on her gossamer wings
Her twa een intent on the braw arms that SWEEP
Fore the front o' THE STANE as it enters THE RINGS
Thru' a narrow bit PORT like a ship frae the deep.

She kens ilka laddie o' CURLING maun learn
How to play on THE BROOM wi' the hand and the ee;
How to lay doun A GUARD wi an OOT - or IN TURN;
How to WICK and curl in on the face o' THE TEE.

In a rollicking vein the spunkie wein stands
On her curling ROCK speeding another to greet;
Tho the CHAPPIN' ha hurled her a doun on her hands,
In a twinking she's back on the tips of her feet.

Her youth is eternal, and auld is her fame;
She's lithesome, she's bonnie, she's canty, she's gleg,
She lo'es ilka move that belongs to the game,
From plain KNOCKIN OOT to CRACKING AN EGG.

So toast HER ye sons o' THE STANE and THE BROOM!
She a poem in motion as swaying and swirling
She rides on undaunted to victory or doom
THE VERRA SOUL O' THE GAME, THE SPIRIT O' CURLING.
Posted by Bob Cowan at 23:15 1 comment: 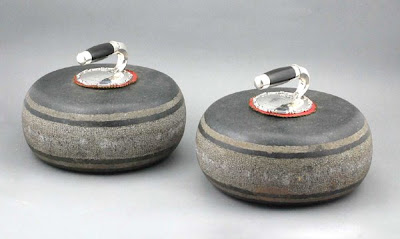 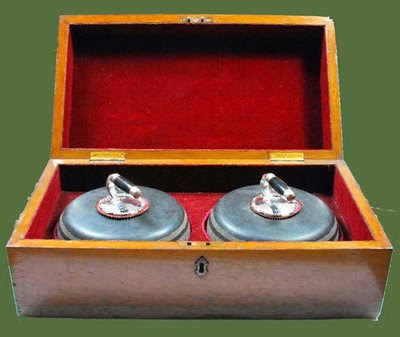 The photos are courtesy of Nicholas Shaw
Posted by Bob Cowan at 20:50 3 comments: