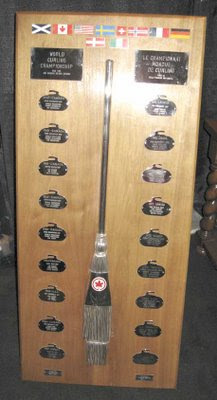 We had a story on the blog recently (here) about the whereabouts of the Air Canada Silver Broom trophy. Here now is a small feature which I wrote for the May 2009 issue of the Scottish Curler magazine.

"The mystery of the whereabouts of the Silver Broom has been solved. The trophy that was awarded to the winners of the Air Canada Silver Broom World Curling Championship, was last played for in 1985, in Glasgow’s Kelvin Hall. On the final night of the event, my last sight of the iconic trophy was of it sitting in the empty arena, and I had often wondered what had happened to it.

The late Doug Maxwell, the Executive Director of the Silver Broom for many years, was trying to find out the answer to the question before his illness, with no success. I was thrilled to learn recently that the Broom had been tracked down by Canadian curler Jamie Hay who used to work for Air Canada. Apparently it had been in store in a Montreal warehouse. It now has pride of place at the Winnipeg Granite Club.

But there were actually two Silver Broom trophies. The first was awarded from 1968-76 and the second from 1977-85. Both had a silver broom that detached from its base, but the bases were different. The earlier one was a plaque, but the later one, designed by a Canadian artist, was a massive piece of carved walnut.

The earlier one trophy has now been found too. It had been in the care of Air Canada’s public relations director Tony Schoen, who had retired first to Switzerland where the trophy was displayed in his restaurant, and then to Victoria, Canada, where it was in his basement. Tony sadly died last year, but thanks to his family, the trophy has not been lost.

All the world championship trophies were on display at the 2009 Ford World Men’s Championship in Moncton: the Scotch Cup, both Silver Brooms, the Hexagon trophy and the current Ford trophy. Large photos of the winning teams were on the wall behind the trophies, and made a very impressive display.

What of the future? Warren Hansen, the Canadian Curling Association’s director of event operations, was quoted in the Eyeopener, the daily newsletter at the Moncton Worlds, “Ideally, they should be part of a permanent collection and on display every year at the world championship. They should really belong in the hands of the World Curling Federation.” 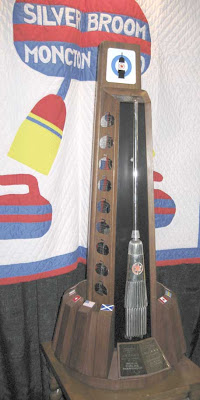