A Pouch for Your Handles 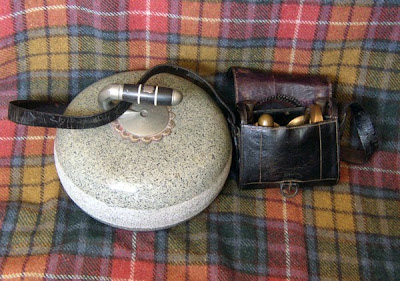 When the handle came to be a necessary part of the curling stone it was at first permanently fixed to the top surface of the stone. This meant that only one sole of the stone could be run on, hence the name 'single-soled' stone. If the ice conditions meant that this stone did not run too well, another stone had to be used in its place and for the whole of the game. The handle was generally permanently fixed by lead or plaster into an eccentrically placed hole chiselled into the top of the stone.

This expedient did not, however, prevent the use of the stone by a non-owner if the owner was absent. The solution to that problem, if it was a problem, was solved by permanently fixing a metal post or peg into the top of stone, and attaching the handle to that. Such posts were generally triangular or square in cross section. When the proud curler left his beautiful stones in the curling house he could remove the handles, place them in his pocket, and be safe from fear that they might be misused in his absence.

These handles, because they were usually attached to the post by screws of a wide variety of design, have attracted the name of 'front screw handles'.

By the middle of the nineteenth century the 'double-soled' stone was becoming universal. The handle was attached by being screwed onto a bolt which passed right through the centre of the stone.

By enabling the use of both soles it was possible to configure each sole differently. The most notable difference, which can be easily seen on most surviving outdoor stones, is that one sole was more highly polished than the other, hence the common way of referring to them as 'the keen side' and 'the dull side'. But the manufacturer could also create different widths of running surface, deeper cups, and, in fact, any particular difference which the owner desired.

Since the bolt could vary in diameter, and since the thread on it could also vary, it was important to keep handle and bolt together. The handle plus the bolt made an uncomfortable load for a pocket. The solution to this problem was the creation of the curling stone handle pouch.

My researches have thrown up so far only two references to such devices. Both are from The Scotsman newspaper.

The Scotsman, Jan 8, 1864.
“This Club played for their club medal yesterday, and a handsome curling-stone handle pouch, presented by Mr Davidson as a second prize.”

The Scotsman, December 31, 1871.
“The Holyrood curlers competed on Dunsappie yesterday for two prizes presented by the president, Mr Thomas Anderson; a silver medal, the property of the club; and a curling stone handle pouch, presented by Mr Thomas M. Berry, saddler, Leith...”

(Dunsappie is, of course, Dunsappie Loch, the highest of the three in the Queen's Park, an artificial reservoir made when the road through the Park was first constructed.)

It was only in the month of July 2013 that I first saw two such pouches. The were brought to me by the widow of the grandson of Ebenezer Dawson of Dalkeith CC along with some old-fashioned handles. Suffice it to say that one pouch and the handles are now in my collection awaiting the establishment of a permanent museum of curling, and I am extremely grateful to the donor. 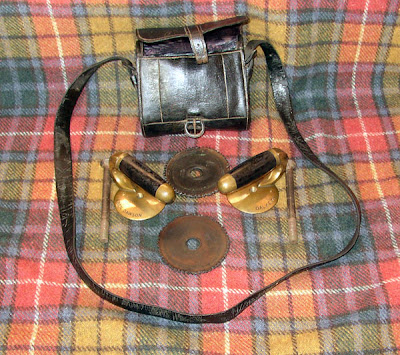 The pouch, which was made of fine leather, cleaned up nicely, as can be seen in the photographs. The largest part was a container for a pair of conventional handles, in my case a fine brass pair inscribed: EBEN DAWSON DALKEITH. On each side is a vertical space for holding one bolt. At the back is a pocket for holding the leather washers which secure the handle.

Two of the washers have the stamp: J. VANCE EDINBURGH. John Vance, Brassfounder and Curling Stone Handle Maker, 79 Grassmarket, Edinburgh, had an advert in the Annual for 1888-9: for 'Curling Stone Handles in Brass, Gun Metal'. Although the washers bore Vance's stamp, there is no maker's mark on Eben Dawson's handles.

It remains to tell a little about the owner of the handles and presumably the pouch. He was a native of Dalkeith, who lived in Glenesk, Eskbank, and carried on business as a currier and tanner, supplying leather to bootmakers, saddlers and the leather trade generally. He followed his father, the first secretary of Dalkeith Curling Club, into the club and was a highly enthusiatic member for over sixty-two years.

Nationally, he became a Council member of the RCCC in 1906. He had two years of office as Vice-President of the Royal Club - in 1886-7 and 1910-11; and he followed Sir James Gibson Craig in 1911 as President of the Midlothian Province, an office he held for ten years. In 1909 he was selected to skip a Midlothian rink in a test match against one of the first Canadian touring rinks to visit Scotland, and was one of the very few Scots rinks to win.

Top: The pouch beside a stone of common Ailsa on a rug of Ancient Buchanan tartan. Above: The pouch and its contents. The images are © the author.
Posted by Bob Cowan at 22:53