This is the third part of the story of curling's debut as an Olympic sport in Chamonix 1924. Part 1 is here, and Part 2 is here.

My reason for setting out to research curling's Olympic story was in part to ensure that the GB team members, Willie Jackson, Robin Welsh, Tom Murray and Laurence Jackson, receive the credit they deserve. However, it has been one of the reserves, Major D G Astley, who has become the most well known name in the GB squad. In this post I will try to unravel the myth that GB's Major D G Astley played for Sweden and thus won both silver and gold medals at the same Olympic event.

I have already mentioned the part that Herald journalist Doug Gillon played in ensuring the validity of the 1924 medals won by the GB curlers. In his article he notes, almost as an aside, "The major (ie Major D G Astley) ended up playing for the Swedes who overcame France in a play-off, finishing runners-up. So the major collected a bona fide Olympic silver, and if the IOC are correct, a gold one as well." But Doug got this completely wrong, I'm afraid to say.

I am guilty of helping disseminate this misinformation. In my Scottish Curler article of February 2006 about Doug's findings, I reprinted his assertions about Major Astley, without checking the facts at source. It's almost ten years later, and I'm only now in the position to set things straight.

Let's examine these two sentences in Doug's story, which have in the intervening years been accepted as 'fact'! I believe that the GB 'reserves' did not receive medals, so Astley would not have been awarded a gold medal or a winners' diploma, although, as I've said, I will be pleased to be proved wrong. And I can find no evidence there was ever a 'play-off' game between Sweden and France, see below.

But my biggest discovery has been that Astley has been wrongly identified as the GB squad member who might have played for Sweden!

How did this suggestion arise? There is an exchange reported in the Annual for 1924-25 from the Royal Club AGM which reads as follows:

What had led William Henderson of Lawton, who was, as we have seen, a critic of the Royal Club's Olympic involvement, to even ask this question? Who was 'The Chairman'? Why did the Chairman appear to be uncertain in remembering if any of the others in the GB squad had been 'members of the Swedish team'? Why would he say, 'to my recollection'?

The whole thing is very peculiar. However, we now can say with certainty that the Chairman of the meeting was John McLeod, NOT Major Astley. It was McLeod, another of the GB 'reserves', who admitted in the exchange above to 'being a member of the Swedish team'. Astley should never have been named in this regard. 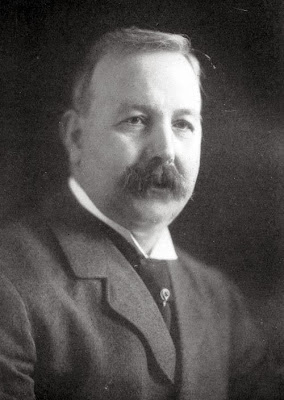 This is John McLeod, in a photo which was included in the Royal Club Annual of 1923-24, because he was Vice-president of the Royal Club in the 1923-24 season. Did he really play for Sweden?

McLeod certainly had links to Swedish curling. He had captained the Scottish team that visited that country in 1920. At the AGM of the Royal Club on July 25 in the North British Hotel in Edinburgh, it was McLeod who proposed the motion that the Swedish Curling Union send a team of six curlers to Scotland in the winter of 1923-24. He had been one of those at the railway station to meet the Swedish team when they arrived at Edinburgh in December, 1923. His obituary, in the 1937-38 Annual, notes that he was a member of the Bridge of Weir CC (he was President in the 1908-09 and 1909-10 seasons) as well as 'several clubs in Sweden'. This last phrase sent to trawling through old Royal Club Annuals but I cannot find his name as a member of any of the clubs belonging to the Swedish Curling Union in the ten years after 1924-25, when the Annuals began to list their membership. Perhaps he would not be considered as a 'regular member' of any of these Swedish Clubs, and so not recorded in the returns sent to the Royal Club. Or perhaps his memberships date from before 1924, before the time when the Swedish membership lists were included in the Annuals.

At Chamonix, could McLeod really have played in either of the medal games for Sweden? It is unthinkable that he would play for the Swedish side in their game against his own countrymen. Might he have played against France, the first match to be played in the competition on Monday, January 28? He's not in the photo of that team shown in Part 2. The only reason that I can think of that he might have taken to the ice would have been if there had been an injury to one of the Swedish side during the game, and none of the other Swedish players were available, to substitute. But this is very unlikely, and surely would have been reported at the time. 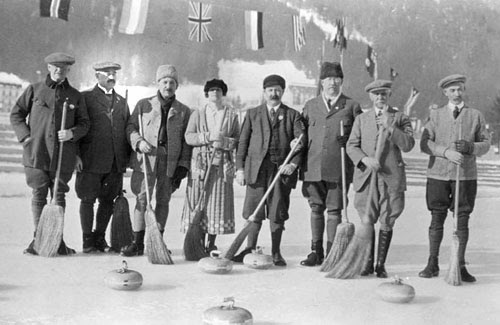 This photo can be found on the IOC website in the gallery of photos from Chamonix 1924, here. It is captioned thus, "Chamonix 1924 - During the events. The Swedish team and the team of Great Britain (GBR)'. This caption is obviously not correct! None of the GB gold medal winning foursome are in the photo. And who is the mystery woman fourth from the left? Who else can be identified in this photo? Colonel Robertson-Aikman is second from the right, next to him is the Swedish skip, Johan Petter Ahlen. The other three of Ahlen's team look to be the three curlers on the left of the photo, i.e. Kronlund, Wahlberg, and Pettersson. Is that William Brown on the right of the photo? John McLeod is in the centre, on the mystery woman's left. That would make four Swedish players, three GB reserves, and a woman. Major Astley is the other GB reserve, and does not appear in this photo.

But perhaps the existence of this photo gives a clue to the mystery of the Scot who played for Sweden. It has always struck me that as only three matches were played, and the competition was over with still some days in hand before the closing ceremonies, there would have been the opportunity to have additional games. The photo above could have been a 'friendly' game, or an 'unofficial international challenge', or something of the sort. Perhaps John McLeod got an opportunity to turn out for Sweden in one of these unofficial games, after the serious business of the medals had been decided? Could that be why he admitted to being 'a member of the Swedish team'.

I shall be happy to hear alternative suggestions. Or proof!

The World Wide Web a great thing, but the problem is that wrong information can be promulgated just as quickly and extensively as correct information. The Astley story has been disseminated widely, and has come to be accepted as fact even in print, for example in Curling, Etcetera: A Whole Bunch of Stuff about the Roaring Game by Bob Weeks, published in 2008. I struggle to see how such misinformation can be rectified. Yes, Major Astley's reputation can be restored, but the problem remains why John McLeod admitted to having been a member of the Swedish team as well as of the GB squad. Perhaps the answer may well lie in archive material in the hands of Svenska Curlingforbundet, the Swedish Curling Association. For the moment the explanation remains tantalisingly out of reach!

[Note: There's a more recent update on this story here.]

Thanks go to John Brown, Hakan Sundstrom and David Smith for help and encouragement, and I am grateful for assistance from Royal Club staff at Cairnie House and at the National Library of Scotland. If anyone can supply any information to make this article more complete, please comment or contact me. If I have made any errors, please point these out. Thanks. Bob.
Posted by Bob Cowan at 08:48

Brilliant, informative and well written. It sets the story of the 1924 Curling Gold Medal and of Major D.G. Astley to rights. I have always wondered how he could have played for GB and Sweden and why so many reports of GB's winter gold medals always says 8 and not 9. Many thanks, enjoyed it immensely.
Lynn Kennedy