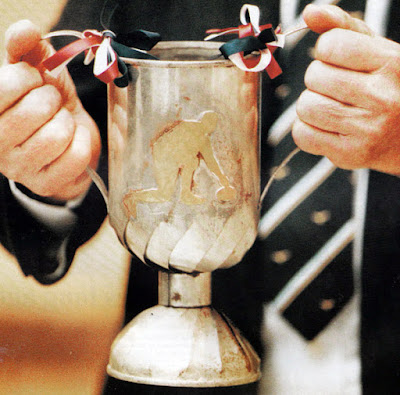 Over the years David Smith wrote many articles about curling history. Many of these appeared in printed publications, predating the Web. It is my intention to resurrect some of them for the Curling History Blog, as they deserve a wider readership, and hopefully through publication online, new information might be unearthed.

This article was first published in the January 1996 issue of the Scottish Curler magazine, entitled 'Wartime Curling for the Colditz Cup'. Its author: Sheriff David Smith.

"On 30th November 1993, the Imperial War Museum in London received a most unusual donation, a curling trophy in the form of a cup. The donor was Mrs Jane Reid, widow of the soldier who, inter alia, wrote The Colditz Story, the saga of escapes from that supposedly escape-proof German fortress.

Correspondence with the Museum produced a photocopy of the cup's discovery from a Swiss newspaper, Anseiger von Saanen. According to the newspaper, the cup had been knocked up in four hours by two articifers from the Royal Navy, Tubby Lister and Wally Hammond, as a trophy for play between some local Swiss curlers from Saanenmoser and some Colditz escapers who had reached Switzerland on their way home to 'Blighty'.

The report continued, 'After the war the cup remained, along with other trophies, in a showcase in one of the village's hotels, but it was lost sight of when the hotel was demolished and rebuilt in 1984.'

The mother of the present owner of the hotel found it in a barn, and, putting two and two together, got in touch with Mrs Reid, who now lives in Zurich.

Through the good offices of the Imperial War Museum, I eventually got in touch with Lt. Commander Billie Stephens, one of the curling-escapers. This is what he wrote. 'I am sorry not to have replied more quickly to your letter re the curling cup made for the competition in February '43 between Saanenmoser team and the 'ex-Colditz lub'. Tubby and Wally were (although not officers) in Colditz for a short time and when the Germans found out their mistake they were returned to their Stalag Camp - from which - armed with all the sophisticated escape 'know-how' learnt in Colditz - they arrived in Switzerland without much trouble, and were waiting with my three companions and myself who had been lucky enough to get out of Colditz on 14/10/42, for a suitable French Resistance group to help us through France and across the frontier into Spain.'

Tubby and Wally volunteered to make a suitable cup out of old tin cans thus proving the skills they had learned in prison - which also I may add included lock-picking! The Saanen people were too good for us but as far as I can remember a very good time was had by all. Alas, I am now the only one of our party still alive."

The above was what David wrote in the 1996 Scottish Curler article. Some new information can now be added. The trophy described in the article above remains in the care of the Imperial War Museum, see here. 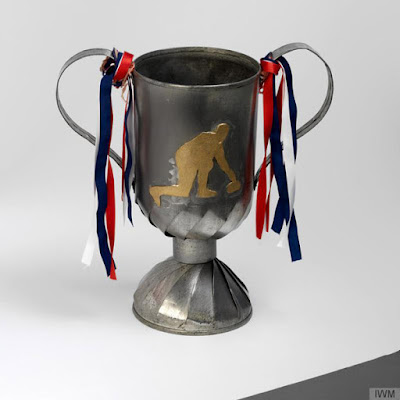 It has been re-photographed well. 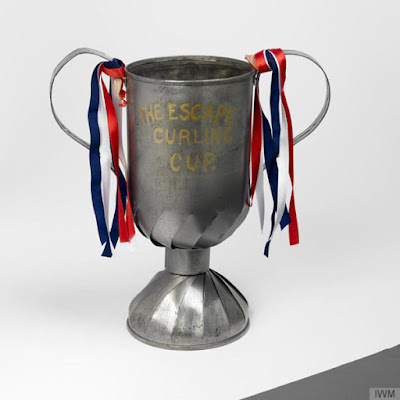 But the surprising find is that it was actually called 'The Escape Curling Cup'. The notes accompanying the photos in the Imperial War Museum's online collection simply say that it was 'Made by escaped POWs while awaiting repatriation'.

It is described, 'Handmade trophy cup inscribed THE ESCAPE CURLING CUP. Red, white and blue ribbons are tied to each handle and there is a gold-coloured cutout of a figure curling on the reverse. Appears to be made from food tins.'

Billie Stephens died in 1997, aged 86. His obituary is online here. Some of his wartime memorabilia was sold at auction in 2012, and there are a number of articles online about the sale, see here, and here. I was excited to find that a photo of the 'Colditz Team' on the ice in Switzerland has survived and has been used in these articles! 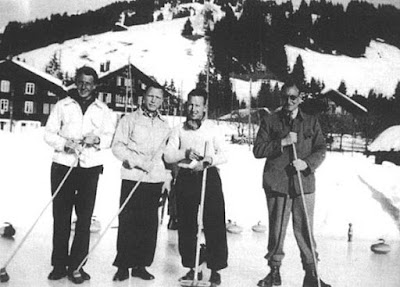 What a remarkable photograph! 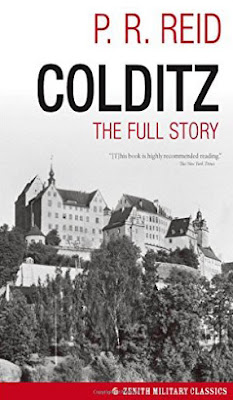 Pat Reid, who appears in the photo above and whose wife donated the Colditz Cup to the Imperial War Museum, wrote The Colditz Story in 1952, and The Latter Days in 1953. A third book, Colditz: The Full Story, was published in 1984, is still in print, above, and also available in digital form as an ebook. It can be purchased here. More about Pat Reid's life can be found here.

Hank Wardle was a Canadian pilot in the Royal Air Force. Read about him here.

Ronnie Littledale is described here,  After his escape, he returned to the front line but was killed in action in France on September 1, 1944, whilst in command of the 2nd Battalion of the King's Royal Rifle Corps, see here.

Who were Tubby Lister and Wally Hammond who made the Escape Curling Cup, and what happened to them? They had both been submariners and were taken prisoner in 1940. Part of their story can be found in this newsletter here, and there's more here.

The photos of the trophy from the Imperial War Museum are shared under the terms of the IWM Non Commercial Licence.
Posted by Bob Cowan at 09:55

Bob: If you find an Edinburgh newspaper article by David entitled "Rocks of All Ages" I would enjoy seeing it. I am not sure of the year.