The earliest printed booklet specifically about curling is from the eighteenth century. It is a collection of songs. 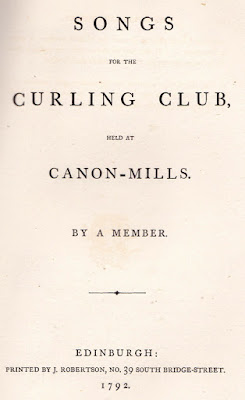 Songs for the Curling Club, held at Canon-Mills, was published in Edinburgh in 1792. The author, or compiler of the songs, is not known. Edinburgh was home to the Canonmills curling club. The location of Canonmills Loch, where the club played, is described here. It was drained in the middle of the nineteenth century.

The original publication is extremely rare. I've cheated a little. The above frontispiece is not from an original 1792 book, but is from a reprint, this one: 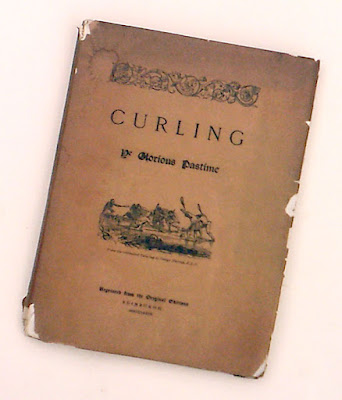 This I am very happy to have in my curling 'library'. It is one of only 250 copies printed in 1882 and, as well as Songs for the Curling Club, contains another rare curling work, An Account of the Game of Curling, dating from 1811. 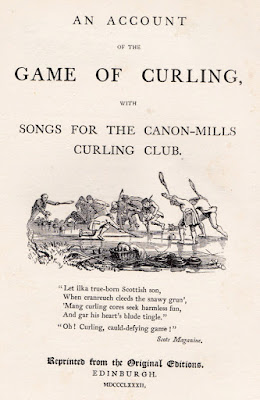 The preface to this reprint of the two earlier books states, "As works relating to Curling or any way connected to it are scarce, and not readily procurable, two of the scarcest of their kind have been selected for re-publication with the view of bringing them within reach of the numerous admirers of this agreeable and exhilarating pastime." J M, Edinburgh, February, 1882. 'J M' was Captain John Macnair, who, in the following years, put together the four volumes of The Channel-Stane or Sweepings frae the Rinks.

In 2016 the content of the volumes is readily available to everyone, as facsimiles can be purchased online from a number of different sites.

There are six songs in Songs for the Curling Club: The Curlers March; The Blast; The Origin of Edinburgh Castle; The Three Open Winters; The Welcome Hame; and The Choise. I recently asked myself the question, "What, if anything, do these songs tell us about the sport in the eighteenth century?" Here are a few thoughts. 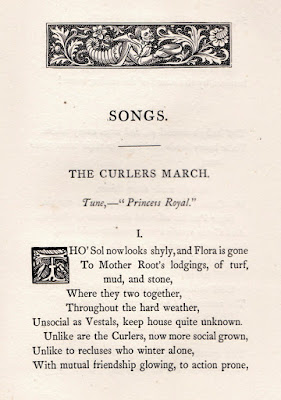 The first printed song is 'The Curlers March' and begins ...

Tho' Sol now looks shyly, and Flora is gone
To Mother Root's lodgings, of turf, mud, and stone,
When they two together,
Throughout the hard weather,
Unsocial as Vestals, keep house quite unknown.
Unlike are the Curlers, now more social grown,
Unlike to recluses who winter alone,
With mutual friendship glowing, to action prone,
Forth come they
Brisk and gay
All in flocks like sons of the spray,
Inspired by the sound of the curling stone!

There are four more verses, in a similar vein, the last referring to post-game traditions of having a meal for 'beef and greens', and drink - a toast 'To all Curlers keen'.

Perhaps someone reading this can help with what is puzzling me about this song. It is apparently to be sung to the tune 'Princess Royal'. This is a popular piece, which you can find online here, here, and in lots of other places on a variety of instruments. But I cannot fit the words to this tune. Can you? Is there other music called 'Princess Royal', or has it just been wrongly ascribed? And if so, what tune might 'The Curlers March' have been sung to?

The tune 'Princess Royal' can also be danced to, as seen here. This may be the first ever connection, however tenuous, between curling and morris dancing!

This page suggests that 'The Curlers March' was played (and sung, perhaps) during the ceremonial procession of Edinburgh magistrates and councillors on the way to Canonmills Loch.

Returning to Songs for the Curling Club ... 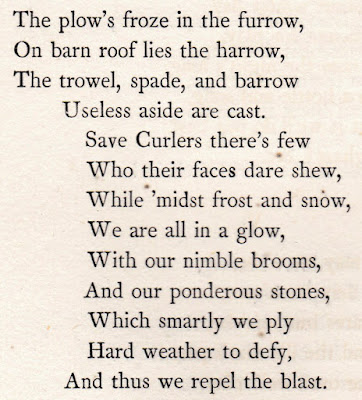 In 'The Blast', the second song in the book, we find the lines

As we mark our gog,
And measure off our hog ...

'Gog' is another word for the tee, and the 'hog' of course is the hogline, both key in setting out ice for a game of curling in the days long before circles were inscribed on the surface. This poem has the line, seen in context above ...

With our nimble brooms ...

which shows that sweeping was a part of the game in the eighteenth century.

Besoms (brooms) are also mentioned is 'The Origin of Edinburgh Castle', which alludes to the games evolution and equipment improving. Three verses end as follows ...

When curling was in infancy
An' stones war no fine.

When curling was in infancy
An' handles no fine.

When curling was in infancy,
And besoms no fine.

In 'The Three Open Winters' the author bemoans the mild conditions that prevented curling from taking place. The chorus reads ...

Alake my walie curling-stanes
Ha'e no been budg'd thir winters three,
'Tween the rains plish plash an' a fireside's fash,
They have dreary winters been to me.

('Walie', or 'wallie', in Scots, is used here, I believe, to mean 'fine' or 'excellent'. I rather like the concept of 'wallie curling stones', not to be confused with 'wallie dugs'.)

But Curlers chase upon the rink,
An learn dead stanes wi' art to jink,
When tir'd wi' that gae in an' drink,
An' please them wi' the skinking o't.

To 'skink' is to pour drinks. I think this shows that some things haven't changed in the traditions of curling since 1792!


Singing may not be such an important aspect of curling these days as it once was, although I trust that at the Henderson Bishop dinner next week at Lockerbie, the ladies will, as usual, be in fine voice.