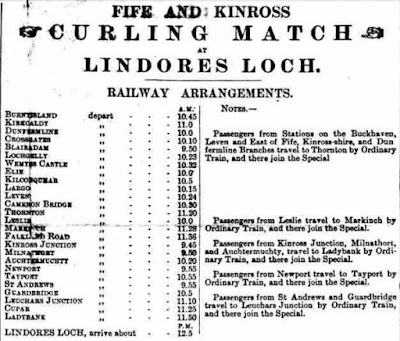 The construction of the railways in the nineteenth century facilitated curling matches, especially those between clubs for District Medals, promoted by the Royal Caledonian Curling Club. And large bonspiels could take place, with curlers travelling by train from all over the country. The Royal Club had its own station platform beside its pond at Carsebreck to allow the Grand Matches to take place, see here.

The image above shows part of an advert placed in the Fife Herald of Wednesday, January 20, 1886, to show players intending to take part in a bonspiel on Lindores Loch how they might reach the venue by special train.

In the 'small print' of the advert there is the caution to players that they have the responsibility of looking after their own stones if they change trains at any point! It says, "The Company will provide the means of conveying the Curling-Stones by Railway; but they do not undertake any responsibility for their safe conveyance; and Curlers are therefore requested to look after their Curling-Stones at the respective Junctions where any change may take place, both in going and returning, as well as on arrival at, and return from, Lindores Loch."

This shows that the railway companies went to some effort to accommodate curlers travelling with their stones, and hints at the problems that might arise when a large number of players were making their way to and from a bonspiel venue.

Curlers occasionally used other means of transport to reach their match. For example, in 1895, teams from Oban travelled to Fort William by ship, see above!

How were stones transported? Were they protected in any way? 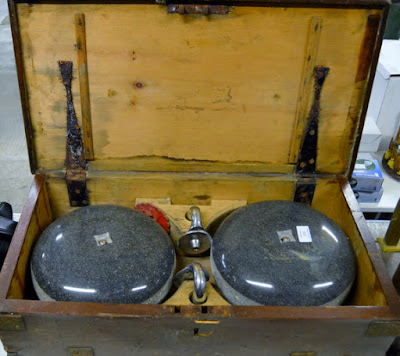 I had always assumed that boxes like this were used primarily for storage at home, or perhaps in a curling house near the pond. A box containing two stones is a heavy weight to carry on to the ice. But I've seen a couple of examples with metal runners on the bottom, turning the box into a sled, suggesting that they could have been used to slide stones over the ice itself.

But boxes containing two stones were heavy to lift, and although in theory they could be taken by train, they would have been cumbersome to manipulate, especially from train to loch. I suspect that such boxes were used primarily for summer storage. 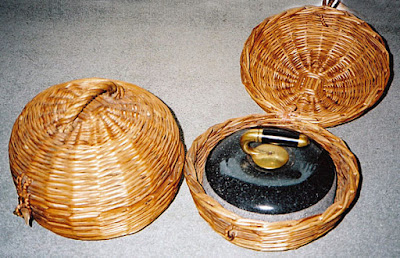 The most common 'protection' for curling stones when travelling was wicker baskets. These examples were tall enough to enclose stones with handles still attached. 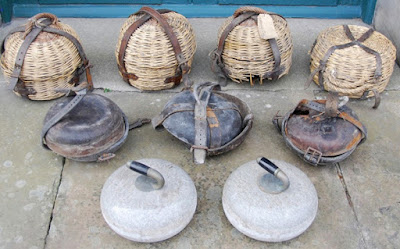 This image, from an auction some years ago, shows a variety of baskets, of different styles, all with leather straps as reinforcement, stones not being light in weight! Close examination showed considerable damage to the wicker.

The photo also shows three leather 'baskets', these to protect just the stones with handles removed. 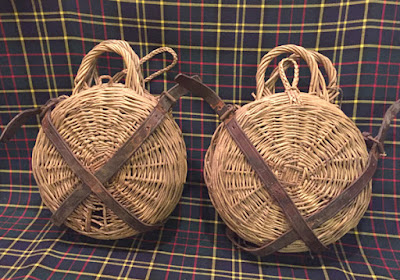 Here is a pair of wicker baskets, just for stones, with no space for handles, that have been well looked after for more than 100 years, in all probability.

Wicker baskets succumb readily to woodworm, and that probably is the reason that so few have survived to the twenty-first century. 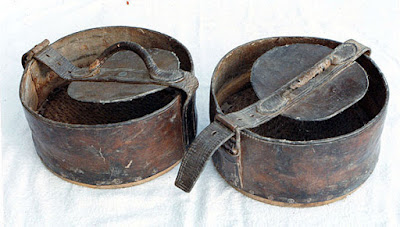 These leather 'containers' would protect stones, whose handles had been removed. 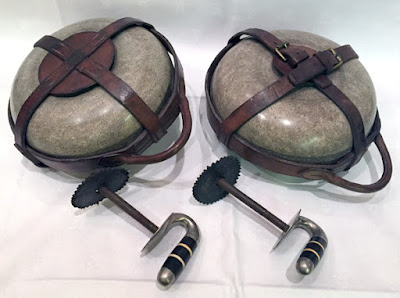 Here is an even simpler leather construction, really just to facilitate carrying the stones.

Handles, stone bolts and washers would have been carried separately, perhaps just in a pocket, or occasionally in a special pouch, see here. 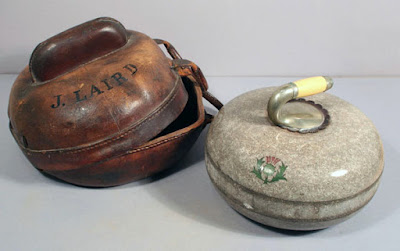 Here is a 'top of the range' curling basket in full leather. 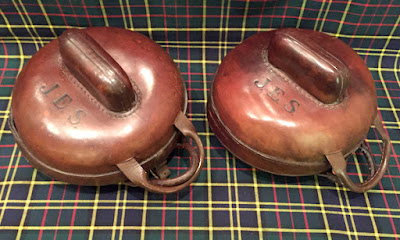 And here is a beautiful pair of leather baskets, designed to protect stones with handles attached. These would have been expensive items at the time. But again, so were curling stones! 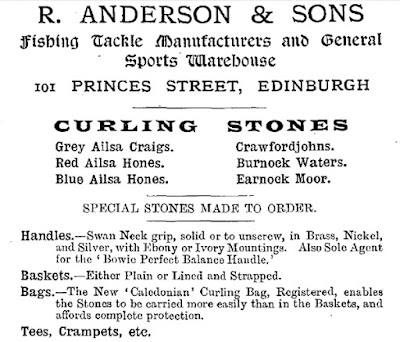 Retailers of curling stones often sold accessories. This advert from an Edinburgh shop in 1907 advertises 'Baskets - either plain, or lined and strapped'. But note that an alternative was available. I wonder if any examples of the 'New Caledonian Curling Bag' have survived. These bags apparently enabled 'the stones to be carried more easily than in the baskets'! I don't know what these bags were like. Do get in touch if you know of any that have survived. 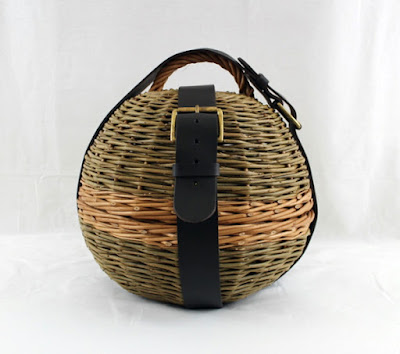 Now, how exciting is this! This is a photo of a new curling stone basket from Hastingwood Baskets in West Kilbride, Scotland, commissioned by Californian curler Alice Mansell. This is for a stone called 'Big Bertha' - a Blue Hone Ailsa Craig weighing 47 lbs. 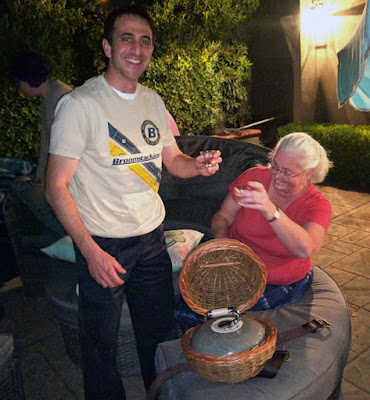 Here's 'Big Bertha' tucked into her basket being toasted by Alice and Big Bertha's owner, Richard Lazarowich, with bourbon from nearby Sonoma County. (What? Not with Scotch whisky?)

Alice has commissioned a further two baskets from the Scottish supplier. She says, "Many Californians are starting to own their own stones to revive the outdoor curling game on our seasonal outdoor rinks in urban areas and natural ice up in the Sierra Nevada Mountains.  We've curled at Yosemite National Park, under Mount Shasta, near Donner Summit, and downtown San Francisco and San Jose so far.  The curling stone baskets will be well used." 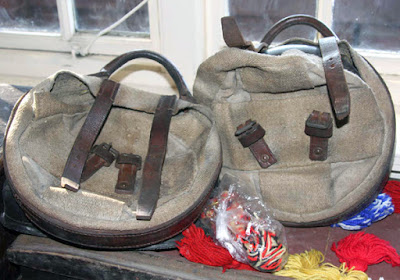 Alice Mansell has emailed to remind me of this photo I took when visiting the Partick Curling Club's curling house back in 2009, see here. She wonders if these could be examples of the 'New Caledonian Curling Bag' in the advert above. I think she could well be correct! 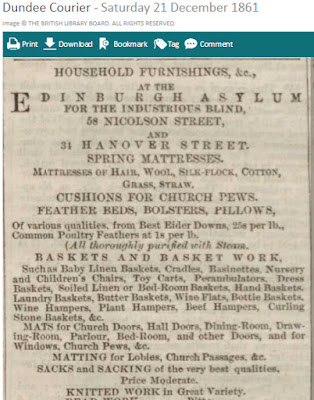 Lindsay Scotland has found this advert in the Dundee Courier from 1861, which would suggest that there was a market for curling stone baskets even at this early date. Thanks Lindsay.

I am especially grateful to Gail Munro who supplied many of the images above of baskets in her collection. Thanks Gail. And to Alice Mansell for the photos and story of sourcing her new baskets. and for reminding me of the Partick photo. (Good to know that others have better memories than I do.) The newspaper images are © The British Library Board, courtesy of the British Newspaper Archive. The Anderson and Sons advert is from a 1907-08 Royal Caledonian Curling Club Annual. Other photos are by the author.
Posted by Bob Cowan at 11:13

Great pictures.Please continue sharing the history of our favorite sport.