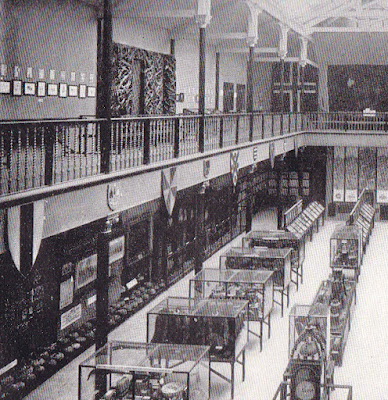 When writing about named curling stones recently, see here, I mentioned the 'Grannies from Meigle'. These distinctive stones from curling's 'boulder age' belonging to Andrew Henderson Bishop had been exhibited together at the 1911 Scottish Exhibition of National History, Art, and Industry at Kelvingrove, Glasgow, with many other curling artifacts. The above image shows part of the South Gallery and on close inspection a large number of curling stones can be seen on the left, at the foot of the north wall of the gallery. The Grannies will be amongst these.

Here are the catalogue entries, describing both stones. 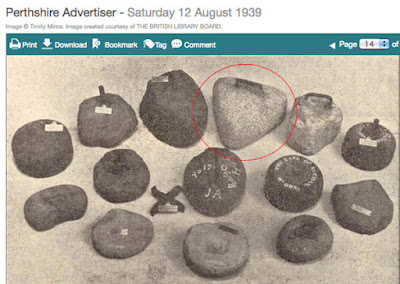 I knew that one of these unusual stones had survived. It was presented to the Royal Caledonian Curling Club by Henderson Bishop in 1938, and in August, 1939, the Perthshire Advertiser recorded that it was among a collection of old stones that was to be exhibited at the Central Scotland Ice Rink in Perth, from the beginning of the 1939-40 season. The rink itself had opened in October 1936.

Henderson Bishop's gift of the Grannie and three other stones is recorded in the Royal Caledonian Curling Club Annual for 1939-40. 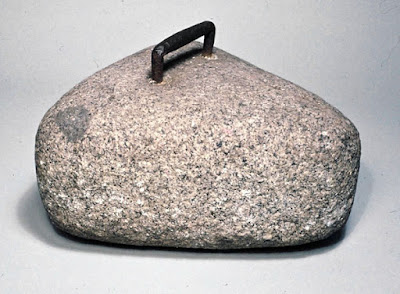 The old rink at Perth is certainly where I first saw it, in the 1960s, and where I had its photograph taken in 1980, above. More recently it was to be found at the Royal Club's former headquarters at Cairnie House, Ingliston, but now, with most of the Scottish Curling Trust's collection, it is in safe storage at Stirling.

I should point out that although the stone is catagorised as from the 'Boulder Age', it is not a naturally formed rock, having been hammer dressed to a triangular shape. 'Whirlies' like this would have been hard to dislodge during play, never mind its enormous weight!

I wondered what had happened to the other Grannie, which was recorded in the 1939-40 Annual as having been sent to Montreal. With some research, luck, and assistance from Canada, here is what I've uncovered.

The second Scottish Men's Tour to Canada and the USA took place in season 1911-12. Setting out from Glasgow, the thirty-one tourists took with them on board the Allan Line's Ionian their own curling stones, and four old stones which were to be a gift to the Montreal Curling Club, the oldest in Canada.

After a supper at the Montreal Club on January 11, 1912, with some seventy curlers in attendance, the old stones were handed over by the Scottish Team Captain, Colonel Robertson-Aikman, on behalf of Andrew Henderson Bishop, who was at that time Vice-President of the Royal Caledonian Curling Club. The event was recorded by the Montreal Daily Witness where one of the stones was described as 'a massive white granite, triangular in shape, and not portable'. This description certainly fits the description of the Canadian Grannie.

The newspaper reported that Colonel Aikman said, "He had heard of the weight that the Montreal men could throw; he would like them to try their hands at the big white one."

"Mr A R Oughtred, accepting the stones on behalf of the Montreal Club, said he would put them where they would be safe, and he assured the gallant Colonel that they would not be used in any ordinary match."

It is safe to assume that Canadian Grannie remained with the Montreal Club for some years, but a recent request for information on her whereabouts did not elicit a response. That's when a little bit of luck led to the wonderful discovery that the other Grannie had indeed survived the intervening one hundred years.

Credit for the discovery must go to 'The Curling Librarian', and her blog post here. Lisa Shamchuk lives in Edmonton and had become involved with the Scotties Tournament of Hearts, Canada's women's championship, when that event came to Red Deer in 2012. Her job, as a volunteer at the championship, was to write articles for the Canadian Curling Association (as it was called then) website. But she also recorded her experiences on her own blog. On Friday, February 23, 1912, she visited the HeartStop Lounge, and wrote that she had found the display of old rocks interesting. She posted a photo of a large triangular stone. I recognised it immediately!

When I contacted Lisa, she was able to find the original digital negative of the photo she had used in her blog post, plus another photo she took on the day, and gave me permission to reproduce these here. 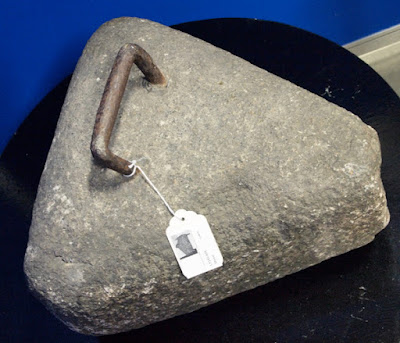 Here is Canadian Grannie on display in 2012. 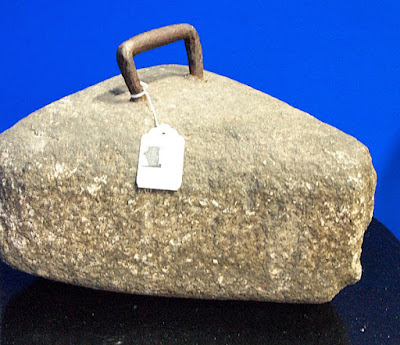 It looks as if Canadian Grannie has suffered some damage to one of its vertices, but perhaps this is not surprising. Your nose might be a bit bashed too if you were four hundred years old!

I suspected that the display of curling memorabilia at the Scotties had been put together by Curling Canada so I contacted a former curling media acquaintance, Al Cameron, who is now their Director, Communication and Media Relations. He confirmed that I was on the right track.

Danny Lamoureux, Curling Canada's Director, Curling Club Development and Championship Services, takes up the story, writing, "The stone was displayed at the Canadian Museum of Civilization as it was on a 25-year loan from us to them. About ten years ago, they returned it to us. We took it around the country to show people who attended our events. Unfortunately, we suspended our travelling road show about three years ago because of budgets."

Danny concludes, "The Canadian Grannie is well looked after in an secure environment here in Ottawa. Hopefully, one day, she will surface again for curlers to enjoy."

And hopefully too Scottish Grannie might also be put on show one day for Scottish curlers to see and appreciate. Would it not be wonderful if the long separated Grannies might even be united one day, even temporarily, perhaps as part of a historical exhibit at a World Championship event?

We may never know the full story of these unusual stones. From where had Henderson Bishop obtained them, who made them and when, and where they were played with? They are not water worn boulders obtained from a river. They have been hewn into a triangular form. Why were two of them made? Meigle is a village to the north east of Perth in Strathmore, and Andrew Henderson Bishop's notes associate the stones with Meigle. Is this significant? The Historical Curling Places website shows many curling ponds in the area from the nineteenth century, but the Grannies surely date from at least the century before that. Perhaps an expert geologist might be able to identify where the material of which they are made was found, or quarried. The mystery of the Grannies remains.

The top image is part of a photograph of the South Gallery of the Palace of History which was printed in the Catalogue of Exhibits, Volume 2, facing page 884. The extract describing the stones was scanned from page 889 of the Catalogue. The Perthshire Advertiser clipping is © Trinity Mirror, courtesy of the British Newspaper Archive. Photographs of the Canadian Grannie are courtesy of Lisa Shamchuk, and huge thanks to her. Thanks also go to Al Cameron and Danny Lamoureux of Curling Canada for their help.
Posted by Bob Cowan at 11:40

Happy to help unintentionally uncover a bit of curling history! Now that I understand their interesting significance, I hope to see a Grannie on display again sometime in the future!

How about a YouTube video of a Grannie in play doing its whirly you-can't-make-me-move skill! I can hardly imagine what both in play might do sitting in the house to 42lb rock take-out attempts.