December and Christmas is a happy time for many. But for others, there are never to be forgotten anniversaries at this time of year. The terrorist bombing of Pan Am flight 103, with the loss of 243 passengers and sixteen crew as well as eleven people on the ground, happened on December 21, 1988. Among the passengers were 35 students from Syracuse University returning home for Christmas following a semester studying in London.

If anything good can be said to have come out of such a tragedy, it is the links that have been forged between Syracuse University and the town of Lockerbie, particularly the scholarship programme which gives the opportunity for two students from Lockerbie to study at SU each year. Even that programme has had a sad anniversary this month. Andrew McClune was one of those from Lockerbie who took part in the programme in 2002-03, but on December 13, 2002, Andrew died as a result of injuries sustained in a fall at a student residence.

Andrew was a keen curler, having played for many years at the Lockerbie rink, just across the road from his school. He is not forgotten. For example, the Andrew McClune memorial trophy is played for by Dumfries and Galloway schools each season.

There's someone else who has good reason to remember Andrew. Jeff Lutz was in his first year at Syracuse University in 2002. He too was a curler. Growing up in Bloomfield Hills, in suburban Detroit, he had begun curling in 1998 in Windsor, Ontario, Canada, at the Roseland Golf and Curling Club. He spent the next two years crossing the border to learn the game. In late 1999, he became the fifth player with an Ohio junior team and took part in the 2000 US Junior Championships in Bemidji, Minnesota.

Headed to Syracuse to study, Jeff left his broom and curling gear at home. When Andrew and Jeff crossed paths and realised they had a common interest in the sport of curling, the pair hit it off and became good friends. Jeff learned that Andrew wanted to put together a University curling team, so he phoned his mother to ask her to ship his curling shoes and brushes to Syracuse! 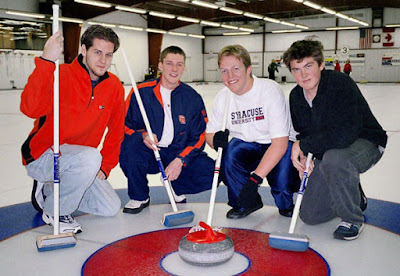 This is the team that Andrew and Jeff put together. L-R: Adam Duke, Andrew McClune, Jeff Lutz, Jon Mason. This photo was taken in November 2002, at the Utica Curling Club.

After Andrew's death, the remaining three curlers decided that they would still take part in the US Collegiate Championships in St Paul, Minnesota, in Andrew's memory, and three months after Andrew's death they played in the competition as a three-man team. The story is here.

Jeff Lutz continued to curl whilst finishing his studies at Syracuse, and in the years that followed. Fast forward a few years to 2014. The Israel Curling Federation was back in the WCF family, thanks particularly to the work by Sharon Cohen and Simon Pack on the ground in Israel with a wheelchair curling programme. When Jeff saw that Israel was an official, active WCF member, he made contact with Simon and suggested that he might help build a men's team for play. He says, "I saw the Israel curling opportunity as a global one - with North America being one of the epicenters of growth."

After a week-long recruiting trip in the USA and Canada, the ICF recruiters identified some fifteen men and five women as possible future team members. Jeff Lutz was one of these.

After try-outs, a men's team was put together, see here, and this rink came through the European 'C' Championships to earn a place in the 'B' Division at Champery/Monthey in 2014, finishing with a two win, four loss, record. Jeff played second on that team. The following year, in Esbjerg, Jeff was in the squad that finished with a six win, five loss, record. The five were Adam Freilich, Leonid Rivkind, Ariel Krasik-Geiger, Jeff Lutz, and Gabriel Kempenich. Last month, at the Le Gruyere European Curling Championships at Braehead, Team Israel, with the same five player squad as 2015, made it to the playoff stages of the 'B' Division but lost out to the experienced Netherlands team in the semis, and to the Czech Republic in the bronze medal game, eventually having to settle for a six win, four loss record, over the event. All the results and linescores can be found here.

Jolene Latimer, who was a winner of the WCF Sports Media Trainee Programme and attended the Braehead event last month, wrote this feature about Team Israel. 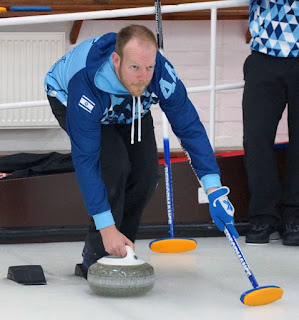 This is a photo of Jeff Lutz at the Greenacres rink, where the team practised prior to the recent European Championships at Braehead. Now thirty-two years of age, married to Dana, holding dual US and Israeli citizenship, and Director, Marketing and Communications with TRIARQ Health, based in Troy, Michigan, Jeff has come a long way since 2002 when he was a first-year student at Syracuse.

He has not forgotten Andrew McClune. When the European Championships were over, Jeff found the time to catch a train to Lockerbie, and pay respects to his friend.


In a recent email he says, "I remember vividly chatting with Andrew in the back of the lecture hall and dreaming about representing Syracuse at the college nationals. I always found him to be calm, yet confident - incredibly different to the curler that I was at the time. Admittedly, I was not the most composed curler, so when you find a curler like Andrew, you couldn't help to admire him. He was truly my first friend at college, and the fact that he played this same wonderful game as I, absolutely made him a friend for life - he was good hearted and wanted to make those around him feel loved. That's the definition of a special person."

Jeff visited Andrew's grave in Dryfesdale cemetery, and the Garden of Remembrance and the Lockerbie Disaster Memorial. He called in at the ice rink ... but Jeff should probably tell you the story of his visit himself. Read his account here, in a post that Jeff has put online about his visit to Lockerbie. I think Andrew would have been proud of his friend!

The Syracuse - Lockerbie connection still continues. The students from Lockerbie that have studied at Syracuse over the years are listed here. Ellen Boomer, another curler, participated in the programme last year. She kept a blog diary, which is a wonderful record of her experiences. If you have time to read just one entry, make it this one here, and be proud of Ellen, and of our young people!

Thanks to Sandy Scott. And to Jeff for sharing his memories. The photo of the Syracuse team is by Lawrence Mason. Jeff's photo at Greenacres is by Sharon Cohen.
Posted by Bob Cowan at 12:45