In search of the red stones

Not all old curling stones are made from Ailsa Craig granite. When David Smith wrote 'Some facts about old stones' back in 2008, see here, he listed many of the different types of stone that had been used to make curling stones, that he had found mentioned in books and adverts from the late nineteenth century. Aside from the various forms from Ailsa Craig (still used today by Kays in Mauchline, see here) there were Burnock Water, Tinkernhill, Carsphairn Red, Crawfordjohn, Silver Grey, Muthill, Giells, Earnock Moor, Blantyre Black, Blantyre Silver Grey, and Douglas Water. There were also Crieff Serpentine, Furnace, and Tinto. In more recent years we can add two types of Welsh Trefor to the list, as used by the Canada Curling Stone Company, see here. And today curling stones are made from Chinese stone by the Tiano Company, see here.

Some of these stone types, old and new, can be identified easily. David's 2008 article contained images to assist such identification, although the detail and source of many of these older types of stone has now been lost.

There's lots to be said about some of them. I've written, here, about 'Crawfordjohns' whose source is the Craighead Quarry, near Abington. But I've become curious about red stones, such as those made, apparently, from stone found near Carsphairn in Dumfries and Galloway, and described as 'Carsphairn Reds'. 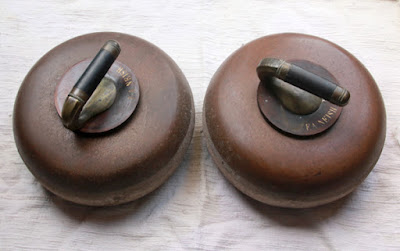 These are my own red stones. I thought they were probably Carsphairn Reds, but I couldn't be sure. This past summer I resolved to try find out where this stone came from, and who made them.

The first reference that I can find in the old literature is in the book 'Curling', by James Taylor, published in 1884. In a chapter entitled 'Curling Stones' he quotes extensively from James Brown's 'History of the Sanquhar Curling Society' which had been published in 1874 to mark the centenary of the Society. Brown describes the different material from which curling stones have been made by Sanquhar curlers at different times over the years and writes, "A few from Muirbrack, in the Parish of Carsphairn, have also been made. They are of a peculiar reddish colour, light in proportion to their size, and run well."

The Reverend John Kerr's book, 'History of Curling and Fifty Years of the Royal Caledonian Curling Club', published in 1890, has lots to say about curling stones. In a chapter entitled 'The Science of Curling' he asks an expert, Professor Forster Heddle, for his opinions. According to the National Museum of Scotland's website (here), Professor Heddle was a larger than life character, a renowned academic and one of Scotland's most famous mineralogists.

We learn from Kerr's book that six varieties of curling stone (Ailsa Blue Hone, Ailsa Red Hone, Common Ailsa, Crawfordjohn, Burnock Water and Crieff) accounted for two thirds of all curling stones in use at that time. Carsphairn Reds were not common, but are certainly mentioned. Professor Heddle writes, "Carsphairn. This is a stone the first inspection of which is not in its favour, but which increases in apparent excellence the more it is examined. The rock is a quartz porphyry, and that which is unpromising is the large amount of quartz, bringing in lightness and brittleness. And, secondly, that it is a porphyry, which, in a certain sense, implies absence of uniformity.

A porphyry has a structure in which crystals are embedded in a paste, in the same manner as raisins are embedded in a dumpling. Here is absence of uniformity. As the raisins may be picked out of the dumpling, so might the crystals be knocked out of the paste; and though it might be held that the raisins were the best part of the dumpling, yet it is not so if the 'raisins' bring in lightness and brittleness, and if their removal left a number of holes.

An examination of sections of the rock, however, shows that the surfaces of the quartz crystals are rough, enabling the the paste firmly to grip them; and as that paste is itself of remarkable uniformity - as is the general structure of that stone, there being an absolute freedom from holes - this stone, apart from its lightness, probably is one of great excellence. Never having seen it in mass, I cannot speak to freedom from flaws."

One can tell that Heddle was a good teacher. I won't ever look at a red curling stone again without thinking of his analogy of a dumpling containing raisins!

But where was this Carsphairn stone obtained? I wondered if the 'Muirbrack' mentioned in Taylor's book might be the Marbrack Farm that lies to the east of Carsphairn village. Local knowledge was required, so I visited the Carsphairn Heritage Centre (see here). There I was fortunate to find Anna Campbell on duty, and she had the answer to my question. She knew exactly from where the stone had been obtained - on Furmiston farm, just to the east of Marbrack. She recalled, "Many years ago I walked on the hill face at Furmiston between the B7000 and the farm house. I was looking for evidence of the stones. At several of the rocky outcrops I found evidence of stones which had been roughly hewn as curling stones and then discarded."

This evidence sent me to Furmiston, and the area in question. 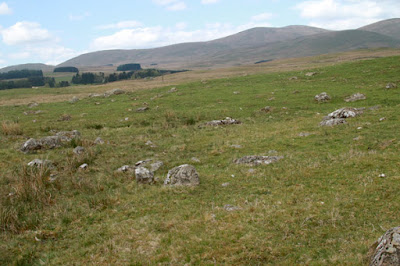 There is no large quarry - the stone was obtained from surface boulders, or outcrops of rock over a large area. 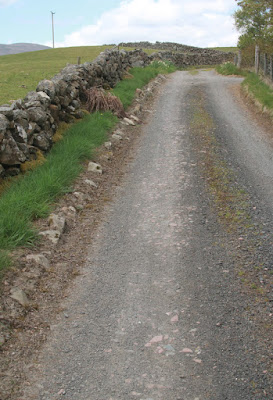 This is the road in to Furmiston. 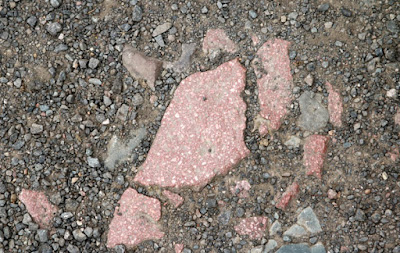 And used to make this farm road were obvious fragments of a red stone. The current holders of Furmiston knew that stone to make curling stones had in the past been taken from the farm, and were able to confirm there was no single quarry from where the stone was obtained. 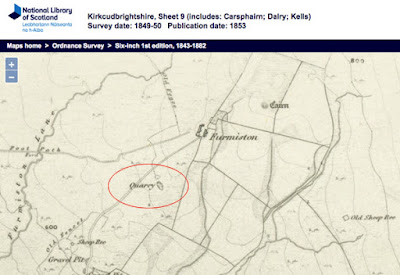 No major quarry, but the Ordnance Survey map from 1853 does indicate evidence of some stone extraction in the area, but this of course might just have been for making roads. 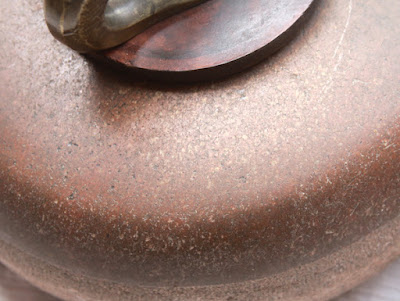 There is no doubt in my mind now that my own red stones, above, are indeed 'Carsphairn Reds'. 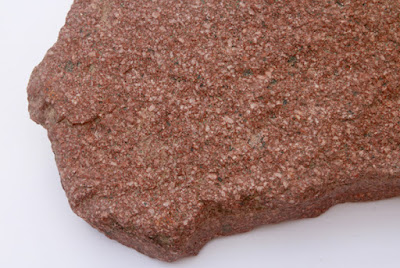 Here's a block of rough stone obtained at Furmiston.

Presumably the blocks of stone, perhaps roughly fashioned into 'cheeses', were taken to be finished at one of the curling stone manufactories that were established at that time. Who was obtaining the stone at source, and sending it forward? This I have been unable to find out, as yet. There does not seem to have been one family doing this, such as the Milligans at Craighead whose name is synonymous with Crawfordjohn stones. Further research is needed here.

As to where the rough blocks were fashioned into actual curling stones, I have two places where this was carried out. The oldest (named) curling stone manufacturer is Andrew Cowan of Barbieston. Cowan's business ledger, which extends from 1865 to 1889, has survived. Most of the stones Cowan made and sold in the earliest years recorded were Ailsas and Burnocks. But on February 1, 1875, he records in his ledger the sale of 12 pairs of 'Red Carsphairn Granite' at 28 shillings a pair. The buyer's name is somewhat indistinct but looks like 'John Hunter Esq' of Dalmellington. (If this is correct it could be the John Hunter who was manager of the Dalmellington Iron Works at that time.) The total bill came to £16 and 16 shillings, with handles still to be sourced and fitted. I cannot find in the ledger how much Cowan paid for the rough Carsphairn blocks.

A second entry from Cowan's ledger, from November 24, 1875, records the sale of 'one pair of Red Carsphairn stones. Extra finish. Checked round the belt' at 30 shillings. (A checkered marking was inscribed on the striking band.) Cowan seems to have supplied a pair of nickel silver handles for these stones at an additional 28 shillings. So, handles could cost almost as much as the stones! It is interesting to compare the cost of other stone types from the same period. On the same page of the ledger, a pair of Common Ailsas cost 32 shillings, whereas a pair of Burnocks was 27 shillings. A pair of brass handles for the latter was 13 shillings.

There's a reference too from the Ardrossan and Saltcoats Herald of January 30, 1891, in an article which described a visit to 'The Curling Stone Manufactory at The Haugh, Mauchline'. This was the company set up by Andrew Kay, and in 1891 was being run by his widow.

Of the various 'metals' described as being used to make curling stones there is the briefest of mentions of 'Carsphairn stone - a deep red'.

There were a number of curling stone makers at the end of the nineteenth century and it is certainly possible that they used Carsphairn stone too. 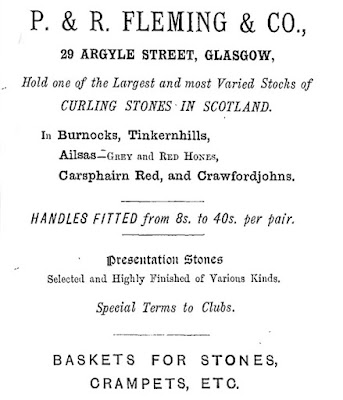 This advert appeared in the Annual of the Royal Caledonian Curling Club for 1888, and 'Carsphairn Red' stones appear prominently. P and R Fleming were a large firm of manufacturing ironmongers, see here, with headquarters on Argyle Street in Glasgow. Selling curling stones and other curling paraphernalia was apparently just a sideline to their main business. Adverts such as that above appeared well into the twentieth century. P and R Fleming did not make the stones. They were simply the retailer.

'The Complete Curler' by John Gordon Grant, published in 1914, mentions Carsphairn stone in passing. In discussing the question, "Which is the best kind of stone?" Grant writes about Ailsas, Burnock Waters and Crawfordjohns, then says, "Besides the Ailsa, Burnocks, and Crawfordjohns there are several other varieties of stone - Blantyres, Tinkernhills, Carsphairns and Crieffs - to be seen occasionally on the pond (and in the makers' establishments)."

Carsphairn curling stones have their place in the sport's history. They may not have the fame of Ailsas but survivors, still in good condition to be played on outside ice, are rare indeed. 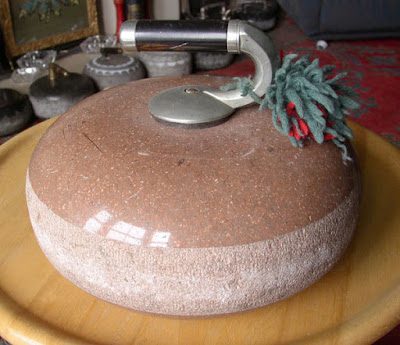 A well polished Carsphairn stone, from the collection of the late David Smith. I wonder who made this one, and who made my pair?

Photos are by Bob Cowan. Thanks to Anna Campbell for all her help. The map clipping is from the NLS maps website here. The P and R Fleming advert is from a Royal Caledonian Curling Club Annual.

As always another great article. I am currently working on an article about Curling in the State of Michigan. Just this morning I found this in The Detroit Free Press archives:

23 Dec 1884. "Curling has caught on at Ishpeming and the club ordered curling stones from Toronto, made from red granite from Alsie (sic) Craig, Scotland, with nickle-plated handles."