Clash of the Champions 2002 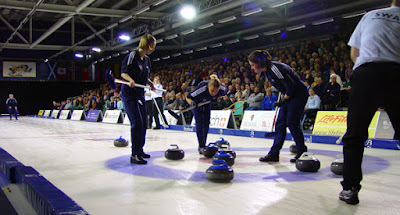 On December 1, 2002, a match was arranged between these two sides.

Christine Stewart takes up the story, writing in the Scottish Curler. "Sunday 1st December, and thousands of shoppers poured into Braehead Shopping Centre near Glasgow to start the serious business of Christmas shopping. Mingling with the shoppers were 600 eager curling fans. They had come from far and wide. Andrew Dodd and Ian Brooks who had got hooked on curling during the Olympics travelled all the way from Brighton. They had been lucky enough to get hold of tickets for what was billed as 'The Clash of the Champions'. 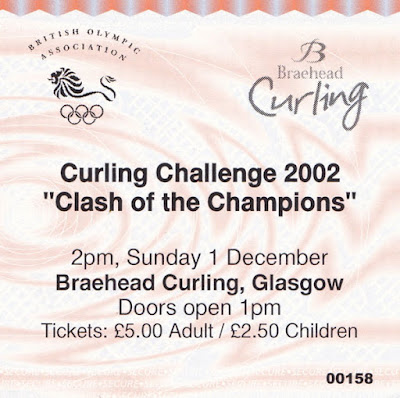 The event was promoted by the British Olympic Association, who had brokered the deal with TV and put up the £10,000 prize pot for a skins game, that type of match still rather uncommon in Scotland at the time. The BOA's involvement was hailed as 'an entrepreneurial first' for the organisation, and it was suggested that their involvement, if successful, 'may herald their arrival as a new player in UK sport promotion'.

Philip Pope, the BOA Press Officer, explained, in an article in The Herald written by Doug Gillon, "We are doing this in the interests of the sport, and not as a commercial enterprise. We have tried to find a mechanism to make it as competitive as possible, to celebrate and showcase a great British achievement which may never happen again."

Mike Hay, at that time the Scottish Institute of Sport's national curling coach, was instrumental in putting the match together. In the years since, Mike joined the BOA in 2006, and has risen in the organisation to be Head of Sport Engagement. He was the Chef de Mission of Team GB at the recent Olympic Winter Games in Pyeongchang. 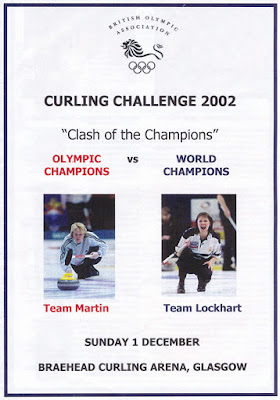 A simple four page programme was produced for the event, and this contained detailed biographies of the two teams, and of the individual players.

Christine Stewart again. "The curling hall at Braehead had been transformed into a television set. Only one sheet of ice was visible, complete with BOA logo in the ice. The other seven ice sheets were covered in blue flooring, and 600 seats had been installed along one side of the curling hall.

Soup, coffee, drinks, sandwiches and snacks were being dispensed from table behind the seats. The bar windows were draped with blackout material enclosing the playing area, setting the stage for 'The Clash'. Opposite, BBC television with all its gizmos and gadgets was set up, and cameras at either end on long jibs were set to catch every stone and every sweeping call.

A gantry had been erected to house the commentators, the Olympic team of Dougie Donnelly and Kirsty Hay. Hazel Irvine was on hand for the introductions and interviews."

Sandy Forrest, from Cumbrae Primary School, and Alison Howie from Craigholme School, had won a competition to be the flag-bearers for the teams. Sixteen year old Jack Sillito, a fifth year pupil at Glasgow Academy, piped in the teams. 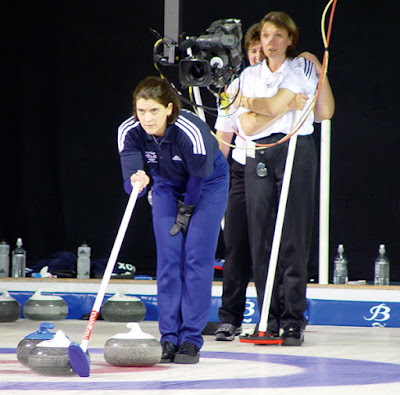 How did the game go? At the halfway point the Olympians had £2,100 in the bag. Playing the final end Rhona's team had already won the match but £3,500 was still available.

Christine Stewart describes the climax. "Jackie lay two shots, Rhona had the choice, go for the double takeout and the money, or play a safe draw and take the game to an extra end. The crowd wanted the double, and she went for it, but lifted one stone only, leaving Jackie's team winning the end.

Final score was Olympic Champions £5,300, World Champions £4,700, not bad just a few weeks before Christmas. (Added later: In fact the curlers did not receive cash, but goods to the value.)

The crowd in the curling hall voted the event a huge success, and the fans left wanting more of this type of curling." 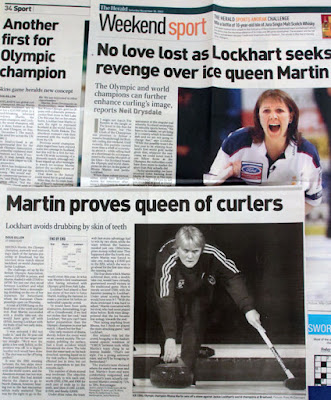 The match received good coverage in the print newspapers of the time, as the three articles above, written by Doug Gillon and Neil Drysdale, demonstrate. The year 2002 seems not long ago, but this was still before the days of smart phones and social media!

They make great reading now. Drysdale's preview in the 'Weekend Sport' section of The Herald had a number of provocative quotes from Jackie Lockhart. And we learned a little about her team. Drysdale writes, "Her rink comprises a rich mix of diverse characters. There's Kat Fairweather, 24, 'the shy, quiet one'; Anne Laird, 31, 'who popped out to the toilet in Bismarck and had her flush televised live on the show'; Sheila Swan, 23, 'the cheeky extrovert with a flair for karaoke and dancing to YMCA'; and Lockhart herself, who doesn't seem overly interested in the standing on ceremony or mincing her words."

At the big match at the Braehead rink, everyone was dancing to YMCA between ends!

The two photos of the match at Braehead, showing the Martin team in action, and Debbie Knox in the head with Jackie and Sheila behind, are by Hugh Stewart. The other material is from my own archive.

Does anyone have video of the BBC transmission of the game?
Posted by Bob Cowan at 11:14

Great history, Bob! Here's hoping we get another such match with this year's Olympic v. worlds champions.