The Falkirk Ice Rink and the British Open Competition 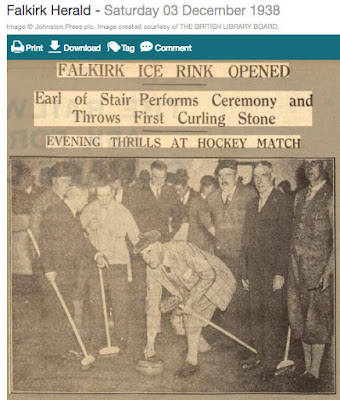 It is good to see that the old 'British Open' trophy is being played for next weekend at the Peak, Stirling. The trophy's history is worthy of mention. It was first played for at the Falkirk Ice Rink in 1945. That rink had opened on Wednesday, November 30, 1938, the Earl of Stair doing the honours, as shown in the image above.

The Royal Caledonian Curling Club Annual for 1939-40 records, "Indoor Curling in Scotland has been gaining ground rapidly, last season closing with artificial ice available at Crossmyloof (Glasgow), Haymarket (Edinburgh), Perth, Dundee, Kirkcaldy, Falkirk and Ayr, whilst new rinks have been built during the close season at Paisley and Dunfermline. It is right to say that the development of ice hockey has been mainly responsible for the rapid increase of the artificial ice rinks in Scotland, but our game of curling stands a good second and provides a steady groundwork of support to the Ice Rinks."

Of course, there was a war on. The Falkirk Herald of Saturday, August 24, 1940, had the following report:

"The bombers may threaten, but dancing continues merrily at the Falkirk Ice Rink every evening except Sunday. The patrons continue to be enamoured of the hot music purveyed by Joe Gibson and his London Band. Every Thursday evening there is a departure from syncopation, and patrons, young and old, engage in the traditional dances of Scotland. It’s a great night for all. Patrons are requested to take note of the big charity concert to be held at the Ice Rink on Sunday, 1st September. For further particulars, see our advertising columns."

Throughout the war, the Falkirk ice rink proved to be a popular entertainment venue, despite the blackout restrictions. Skaters, dancers and curlers all patronised the facility. There was even an ice hockey match between the Royal Canadian Army and the Royal Canadian Navy in December, 1942.

In April 1943 the Falkirk Ice Rink Curling Club organised a competition in aid of the Scottish Branch of the British Red Cross Society.

The war was still ongoing when the Falkirk Herald ran this promotional article of interest to the country's curlers on Saturday, December 2, 1944:


"BRITISH OPEN CURLING CHAMPIONSHIP To be Held in Falkirk Ice Rink.
Arrangements have been made to hold the British Open Curling Championship at the Falkirk Ice Rink in the week commencing 5th February, 1945. It is anticipated that entries will be received from all over Great Britain. Most of the leading British players have already played over the Falkirk Ice and have congratulated the management on its quality. It is a fitting reward for all the work which has been done to obtain this standard, that the British championship is to be staged on the Falkirk Rink. Mr Festus Moffat, who is acting as secretary of the tournament, informs us that the championship trophy is open for competition to any four curlers. The winners, in addition to retaining the trophy for a year, are made the recipients of individual prizes, and the runners-up also receive individual prizes. During the championship week, a curlers’ dinner is to be held on the Tuesday, and an ice hockey match is being staged for the Wednesday, and on Thursday a dance, which will consist largely of old-fashioned dances, with Harold M'Ardle and William Hannah and his band, will help to make the championship week of greater interest." 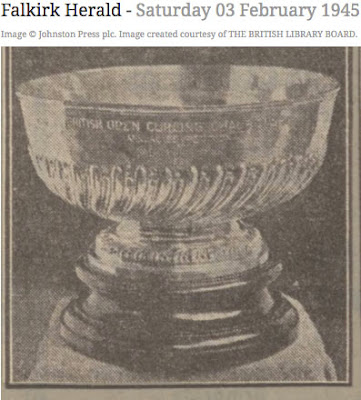 The Falkirk Herald on February 3, 1945, had a photo of the trophy which was to be played for. The caption stated, "The photograph reproduced above is of the British Open Curling Championship Trophy to be competed for within the Falkirk Ice Rink next week. It is a 15-in diameter solid silver bowl of Queen Anne design, fluted pattern, on an ebony plinth. During the present week it has been exhibited, along with the other rink trophies, in the shop window of Mr W Callander, jeweller, 130 High Street, Falkirk, the whole making a most attractive display, in which a keen public interest has been evinced, the handsome championship trophy being generally admired. It is to be presented to the winning rink by the Right Hon. Thomas Johnston, PC, MP, at the final session next Saturday afternoon, when the ceremony is to be recorded for broadcasting."


The competition duly went ahead with seventy rinks taking part. There were three sessions each day, and each evening had 'special attractions' for the entertainment of visitors and the general public. The participants included a Canadian side. The Falkirk Herald on February 7, 1945, reported that the Canadian Sports Service had sent a rink, representing the Maple Leaf Club. "Many of the players from the Dominion had never been in Scotland before, and to them, at least, their visit to Falkirk was full of interest. None of the Canadians had met previously, but they soon teamed-up as a rink determined to make a bid for the honours of the tournament. The arrival of the Canadians was marked by an interesting incident. The visitors were rather crestfallen to find that the old-fashioned broom used in Canada seemed no longer to find favour in Scottish curling, brushes now being substituted for the handy broom. The disappointment of the Canadians did not last long, however, for their needs were attended to almost at once. Mr Alexander and Mr Waddell, Dollar, procured a supply of the necessary brooms, and the Canadians were thus enabled to play the game with their favoured equipment." 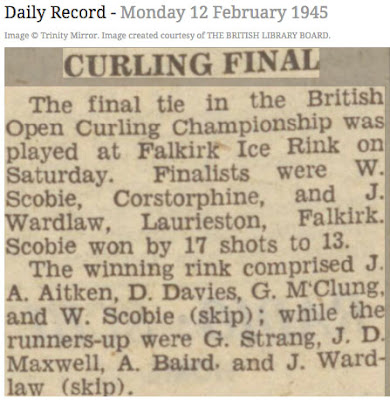 The Daily Record had the results of the final game.

The Falkirk Herald made much more of the event as an article in the edition of Wednesday, February 14, 1945, shows. Here it is in its entirety. The report gives an insight into what curling was like in 1945, how it was perceived generally, and also the significance of the British Open competition.

"The British Open Curling Championship, play in which was conducted at the Falkirk Ice Rink throughout the whole of last week, was undoubtedly one of the best organised and most successful competitive events of the kind ever held in Scotland. At the final tie, for instance, on Saturday afternoon, there were fully 1500 spectators, probably the largest crowd ever to have witnessed a single rink curling game in this country. It was evident at least, that the indoor curling game on artificial ice is increasing in popularity in Scotland, and the directors and management of Falkirk Ice Rink, by their enterprise and initiative in organising and carrying through so successfully the British Open Championship, have played an important part in creating public interest in this social but skillful recreation.

The final tie was between rink teams skipped by Mr J Wardlaw, Laurieston, Falkirk, and Mr William Scobie, Corstorphine. To reach the final both clubs had overcome some formidable opposition from all over Scotland, and even further afield. Play in the final was over 16 ends, and although the time occupied in the contest was three and a half hours, so keen was the interest manifested that the crowd waited until the end of play, and the presentation of the prizes by Mr Thomas Johnston, Secretary of State for Scotland.

PLAY DESCRIBED. Both teams gave a capital display, and the many good stones sent down brought out loud and prolonged applause. The personnel of the respective rinks were: Laurieston— George Strang (lead), A Baird (2), D Maxwell (3), and J Wardlaw (skip). Corstorphine—J A Aitken (lead), A Davies (2), G. M'Clung (3) and W. Scobie (skip).

There was a cautiousness on the part of both skips at the start. The first six ends were generally in favour of Wardlaw, the score at this stage being five shots to one in favour of the Laurieston skip. From a local point of view, this was indeed promising, but the seventh end saw a transformation that was startling when compared with the previous ends. By skillful play and exceedingly meritorious placing of their stones, Scobie’s rink gained half a dozen shots, to take the lead by 7-5. This seemed to be the crux of the whole game, for Scobie always endeavoured to build up a strong well-guarded end, and when in the tenth end his tactics brought a collection of five shots, his rink never looked back. After that it was a battle royal between the two skips, but superior generalship told.

Wardlaw at times was splendid, but could not, nor would not, knock out his opponent's guards. At the 12th end, Wardlaw pulled up with three shots, and from then on until practically the end, Scobie never appeared to be really anxious about the outcome, and the game ended in victory for Scobie by 17 shots to 13 for Wardlaw. Both teams are undoubtedly in the championship class, but on the day’s showing Scobie's rink had just that something extra that carried them through."

The newspaper recorded that the individual members of the winning rink had each received silver salvers, and the runners-up, brandy flasks. A speech by the Secretary of State for Scotland, Thomas Johnston, was reported in full. He had presented the prizes, and the Falkirk Herald noted that "He did not take a gloomy view of the future. He was one of those who believed that a nation which could face up to the perils of Dunkirk, a nation that could face up to Hitler's Wehrmacht with a Home Guard armed with sporting rifles and walking-sticks, was a nation that was not going to go down in discordance. If we maintained among ourselves a modicum of goodwill resembling the ice team rink spirit, we need have no fear of the future of our country."

The Scottish Curler magazine was first published in 1954, by which time the British Open at Falkirk was well established as a major curling competition. 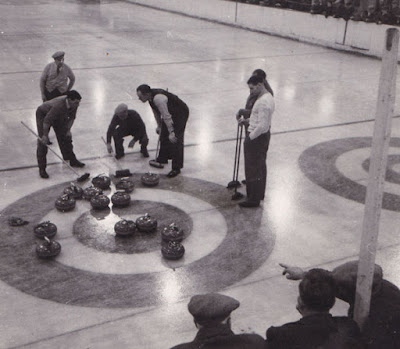 This photograph was on the front cover of the March 1954 issue of the Scottish Curler. It is captioned, "A Full House ... and Willie Young and his rink look for a way in. In this grand head, the 6th end in the 'British' final, 14 stones are grouped round the tee and Willie Young has the last stone. Note the spectator pointing out the shot to play. It's always easy from the bank!" 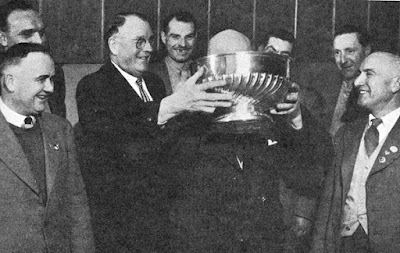 Here we see the trophy, filled with whisky (as once was a common tradition) and passed around. John Miller is drinking from the cup, and looking on are John Pearson, Willie Young, John Robertson, George Lindsay, J Scott, J Gilchrist and Bob Young. The tenth British Open competition had been won by John Robertson's Glasgow rink who beat Willie Young's side 17-9 after fourteen ends.

In 1955 Jimmy Sellar was the winning skip, with his wife Rena as the lead on the team, the first woman to have her name on the trophy.

Falkirk Ice Rink rink closed as an ice sports venue in 1977, the British Open then being played at the old Stirling rink thereafter, before that rink also closed, and it moved to the Peak, Stirling. 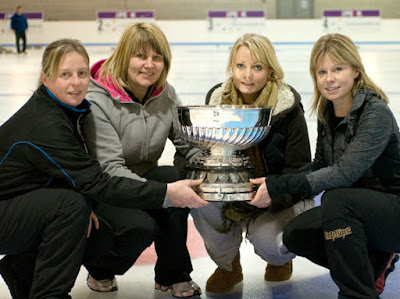 I suspect this must have been one of the last times the trophy was competed for, in 2011. I reported on this here in the Skip Cottage Curling blog. The photo of the winners, above, was courtesy of Tony Flisch. L-R: Annie Laird, Lorna Vevers, Anna Sloan, Kelly Wood.

Here's to a great future ahead for the trophy, see here.

Other images are from the British Newspaper Archive, as indicated, or from Scottish Curler magazines.
Posted by Bob Cowan at 15:19