Curling in the USA has expanded rapidly in recent years, thanks to the Olympics, and the realisation that multi-sport ice arenas can host curling clubs. Idaho, a state in the north-west of the country, got its first curling club, the Boise Curling Club, in 2006. This five-sheet club uses ice at Idaho Ice World. It has some seventy members, who hope to have their own dedicated ice in the future. 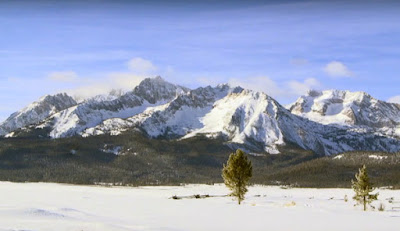 In January 2020, the club will host its eighth outdoor bonspiel at the small community of Stanley, Idaho, some 140 miles north east of Boise. In summer, Stanley is the gateway to the Sawtooth Mountains, and a centre for all sorts of summer pursuits. It is a spectacular part of the world, especially if you like mountains. There are other outdoor bonspiels in North America, but the Sawtooth Outdoor Bonspiel has now been 'immortalised' in a full length documentary film. 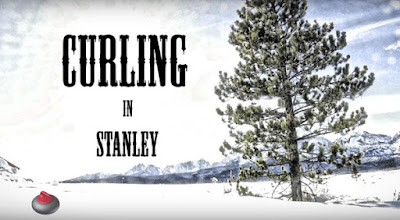 The film had its premier on YouTube on November 29, 2019. Be warned though, this is not a watch for those with limited attention spans, or those of the Twitter generation. It requires commitment - seventy-nine minutes of commitment. So, pour yourself a coffee, or something stronger, put your feet up and get comfortable before you begin to watch it, and enjoy it, here. 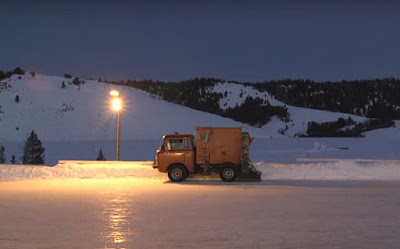 Those who have curled outside in Scotland may well be taken aback by the sight of a Zamboni preparing the rink! And the individual sheets were cut with an Ice King, and pebbled! As you can see above, the rink was lit for curling at night, and in the early morning. At 7am, with the temperature at just 6 degrees Fahrenheit (or minus 15 degrees Celsius), these US curlers are hardy souls!

The film does not attempt to show how individual games were won and lost. Rather, it attempts to highlight the fun and camaraderie of the occasion, and for anyone who has experience of American curlers, their passion, their friendliness (and their eccentricities) will find that these are well captured. I rather liked the names of some of the teams taking part, for example,

'The Wasted Stones'
'The Bambi Killers'
'Slide and the Family Stone'
'Stanley Lawn Chairs''Brush with Greatness'
and, my favourite,
'Bob Rocks'. 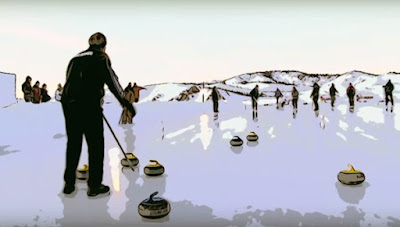 The actual quality of the film is 'interesting'. I was somewhat put off by the use of various filters at different times. It reminded me of when I first encountered Photoshop 'effects' on my own computer. It made the film seem somewhat surreal. Perhaps that was the intention! 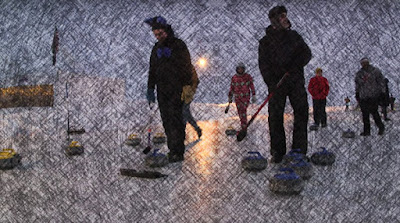 Is there a main character? Well, Daniel 'The Villain' Richard, who plays lead for the Wasted Stones, seems set to have a future career in front of the camera, if not on the curling rink. Way to go, Dan!

"The fog is turning the ice into velcro," has to be the best line from the film. 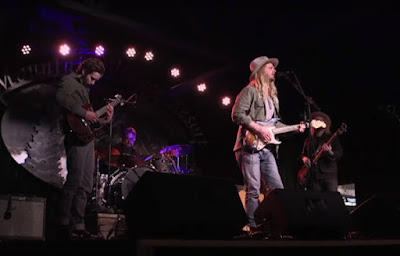 But kudos for the soundtrack, and the occasional appearance, such as Jeff Crosby and the Refugees. above.

So does this reviewer recommend 'Curling in Stanley'? Absolutely, although it will have a niche following. Look out for the rather random appearances of various dogs throughout the film.

The images are screenshots from watching on my laptop.
Posted by Bob Cowan at 14:25

Nice review, Bob! "Ice turning into velcro" is a line I am going to use. Yesterday evening, I faced my heaviest frost ever on curling ice at an outdoor rink in California on the Santa Cruz Beach Boardwalk once the evening mist blew in from the Pacific Ocean during the third learn-to-curl session of the day. Discovered with about 7+ layers of pebble one can curl on top of "velvety" frost.