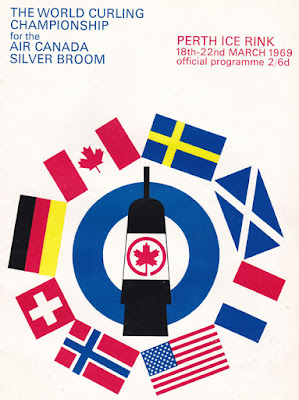 This is the cover of the programme for the Air Canada Silver Broom World Men's Curling Championship, March 18-22, 1969, at the Central Scotland Ice Rink, Perth. Air Canada had taken up the sponsorship the previous year, and the first Silver Broom had been held at Pointe Claire, Quebec, in March, 1968. Previously the competition had been sponsored by the Scotch Whisky Association from 1959 to 1967. The International Curling Federation (later to become the World Curling Federation) had been formed, and the Silver Broom became the 'official' World Curling Championship. The event at Perth was the second Silver Broom.

A new trophy had to be created, and this is it. The broom in the centre was a two-thirds replica in silver of a Canadian style curling broom. Interestingly, the silver plaques on the left had the names of all nine winning teams of the Scotch Cup. The top plaque on the right had the winners of the first Silver Broom competition in 1968. 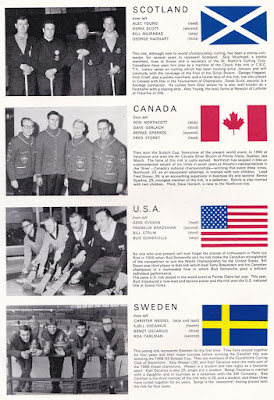 Eight countries would contest for the world title. The pages of the programme with team details looked very colourful, with the national flags. The competing countries are listed in the order they joined the world championship. Here are the first four teams. 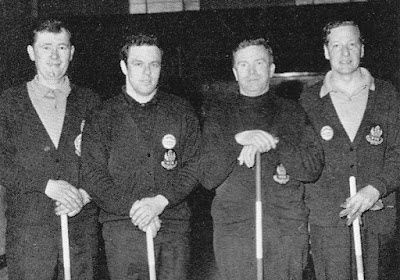 I've scanned the team photographs. Scotland. From left: Alec Young (lead), Derek Scott (second), Bill Muirhead (skip), George Haggart (third). The notes alongside the photo say, "This rink, although new to world championship curling, has been a a strong contender for several years to represent Scotland. Skip Muirhead, a potato merchant, lives at Scone and is secretary of St Martin's Curling Club. Canadians have seen him play as a member of the Chuck Hay rink in CBC TV colour series on curling which has been running since January and will conclude with the coverage of the final of the Silver Broom. George Haggart, from Crieff, also a potato merchant, and a former skip of this rink, has also played with Hay in the Tournament of Champions. Derek Scott, second, is a haulage contractor. He comes from Errol where he is also well-known as a footballer with a blazing shot. Alec Young, the lead, farms at Newton of Lathrisk at Freuchie in Fife."

The Muirhead team had won the Bertola-sponsored Scottish Championship finals, February 28 - March 2. This involved ten teams in a round robin, three games each day. 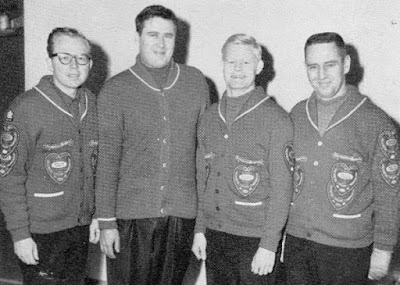 The Canadian team. (L-R) Ron Northcott (skip), Dave Gerlach (third), Bernie Sparkes (second), Fred Storey (lead). The programme notes read, "They won the Scotch Cup, forerunner of the present world event, in 1966 at Vancouver and won the Air Canada Silver Broom at Pointe Claire, Quebec, last March. The fame of this rink is justly earned. Northcott has skipped it into an unprecedented record of six times in seven years as Alberta's representatives in the 'Brier' - Canada's National Championships - inning that event three times. Northcott, 33, an oil equipment salesman, is married with two children. Lead Fred Story, 38, is an accounting supervisor in business life, and second Bernie Sparkes, 29, youngest member of the rink, is a salesman. Bernie is also married with two children. Third, Dave Gerlach, is new to the Northcott rink."

To be clear, Northcott's two previous successes had been with two different third players, George Fink in 1966, and Jimmie Shields in 1968.

Watch the promotional film of the 1969 MacDonald Brier in Oshawa, Ontario, here. (A feast for lovers of corn broom sweeping!) 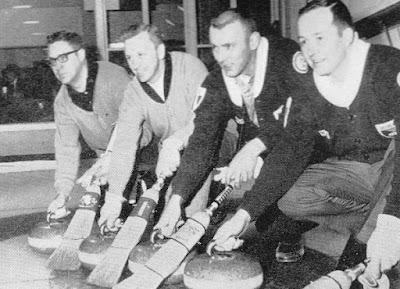 The USA team (L-R) Gene Oveson (lead), Franklin Bradshaw (second), Bill Strum (third), Bud Somerville (skip). The notes say, "No one who was present will ever forget the scenes of enthusiasm in Perth Ice Rink in 1965 when Bud Somerville and his rink broke the Canadian stranglehold of the competition to win the World Championship for the United States. Bill Strum was third player in that rink which beat Terry Brauntein and his Canadian champions in a memorable final in which Bud Somerville gave a brilliant individual performance. The same US rink played in the world event at Point Claire last year. This year, Bud introduced a new lead and second player and the rink won the US national title at Grand Forks." 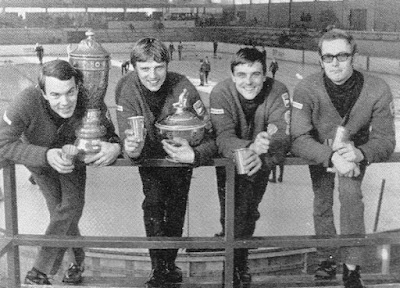 Team Sweden. From left: Christer Wessel (skip and lead), Kjell Oscarius (fourth), Bengt Oscarius (third), Boa Carlman (second). "This young rink represents Sweden for the first time. They have played together for four years and their major success before winning the Swedish title was winning the 1968-69 Solstad Cup. They are members of the Djursholms Curling Club of Stockholm. Skip Wessel (25) and Kjell Oscarius were the male part of the 1968 mixed champions. Wessel is a student and lists rugby as his favourite sport. Kjell Oscarius is also 25, single and a student. Bengt Oscarius is married with a daughter and in business as a salesman with the 3M Company. Boa Carlman is the third member of the rink who is 25, and a student, and these three have curled together for six years. Bengt is the 'newcomer' having played with the rink for four years." 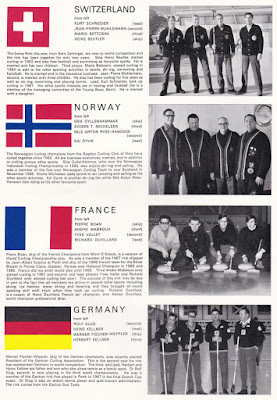 The second page with the other four teams. 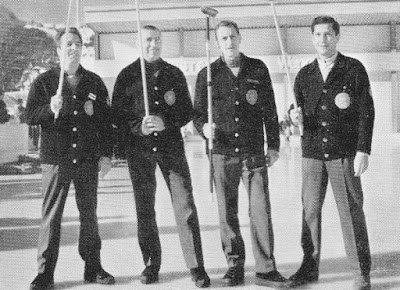 Switzerland (L-R) Kurt Schneider (lead), Jean-Pierre Muhlemann (second), Mario Bettosini (third), Heinz Beutler (skip). "The Swiss Rink this year, from Bern Zahringer, are new to world competition and the rink has been together for only two years. Skip Heinz Beutler started curling in 1962 and also lists football and swimming as favourite sports. He is married and has two children. Third player, Mario Bettosini, started curling in 1964 to add to his other sporting activities in tennis, skiing, swimming and handball. He is married and in the insurance business. Jean-Pierre Muhlemann, second, is married with three children. He also has been curling for five years as well as skiing, swimming and playing tennis. Lead, Kurt Schneider, took up curling in 1967. His other sports interests are in boxing and football (he is a member of the managing committee of the Young Boys, Bern). He is married with a daughter. 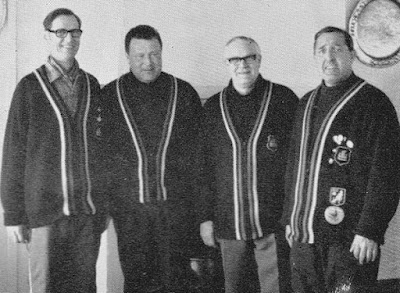 Norway (L-R) Erik Gyllenhammar (skip), Sverre T Michelsen (third), Nils Anton Riise-Hanssen (second), Kai Dyvik (lead). "The Norwegian curling champions from the Bygdoy Curling Club of Oslo have curled together since 1960. All are business executives, married, and in addition to curling pursue other sports. Skip Gyllenhammar, who won the Individual Curling Championship in 1966, also enjoys skiing and sailing. He was a member of the first ever Norwegian Curling Team to tour Scotland in November 1965. Sverre Michelsen adds tennis to ski jumping and sailing as his other sports activities. Kai Dyvik is another skiing fan while Nils Anton Riise-Hanssen lists riding as his other favourite sport." 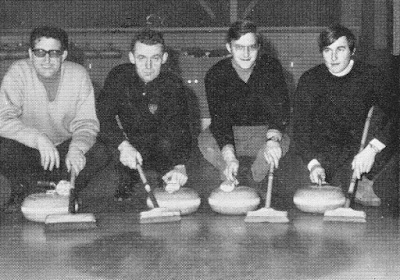 France (L-R) Pierre Boan (skip), Andre Mabboux (third), Yves Vallet (second), Richard Duvillard (lead). "Pierre Boan, skip of the French Champions from Mont D'Arbois, is a veteran of World Curling Championship play. He was a member of the 1967 rink skipped by Jean-Albert Sulpice at Perth and skip of the 1968 French team for the Silver Broom at Point Claire, Quebec. He was also National Champion in 1965 and 1966. France did not enter world play until 1966. Third Andre Mabboux only started curling in 1967 and second and lead players Yves Vallet and Richard Duvillard only started curling last year! The success of this rink may be due in part to the fact that all members are active in several other sports including skiing, ice hockey, water skiing and bowling and they brought all-round sporting skill with them when they took up curling. Richard Duvillard is a cousin of Henri Duvillard, French ski champion, and Adrien Duvillard, world champion professional skier." 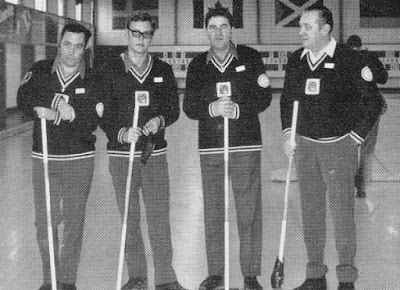 Germany (L-R) Rolf Klug (second), Heinz Kellner (lead), Werner Fischer-Weppler (skip), Herbert Kellner (third). "Werner Fischer-Weppler, skip of the German champions, was recently elected President of the German Curling Association. This is the second year his rink has represented Germany in world competition. The third and lead, Herbert and Heinz Kellner are father and son who also share tennis as a family sport. Dr Rolf Klug, second, is now playing in his third world championship. He was a member of the German rink that played in Perth in 1967 in the final Scotch Cup event. Dr Klug is also an ardent tennis player and well-known administrator. The rink comes from the Eisclub Bad Toelz."


The format of the competition in 1969 was a round robin, with the second and third placed rinks contesting a semifinal game, for the right to meet the first placed team in the final. After the round robin, the teams' win-loss records were as follows:

Canada's loss was to the USA in Round 5, 10-12. Every nation won at least one game. It is interesting to look at individual game scores on the archived results on the World Curling Federation (here). Scores, such as Canada's defeat of Norway by 28-2, suggest that some games were very one-sided, and that all twelve ends were played out. Unfortunately the full linescores for any game at the event have not survived, and only final scores are shown in the archived records.

In the semifinal, USA beat Scotland 7-5, and in the final Canada beat the USA 9-6.

The report in the April 1969 Scottish Curler notes that Somerville's side came back from 0-6 down after three ends to be just 6-7 behind after ten. They blanked the eleventh, but Northcott counted two in the last end, without the need to play his final stone. The magazine reports that the ice 'became duller' in the twelfth, the US stones falling short.

There's one other inconsistency in the WCF's archived results. These show the lineup in the Swedish team as Kjell Oscarius as skip, but the programme notes (and indeed the Scottish Curler magazine) name Oscarius as the fourth player. Christer Wessel was skip and he played lead stones.

Tom Stewart was Chairman of the Organising Committee. Just who put the programme together is not stated, although it was printed by Mackenzie and Storrie, Coburg Street, Edinburgh. 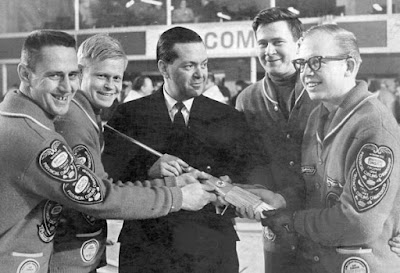 Here's the winning team with Yves Pratte, Chairman of Air Canada, with (L-R) Fred Storey, Bernie Sparkes, Dave Gerlach and Ron Northcott. Photo is by Michael Burns, and appeared on the front cover of the April 1969 Scottish Curler. 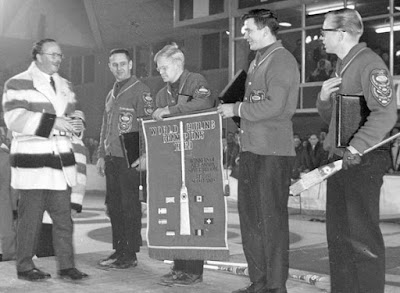 Here's another photo from the presentation, on the ice at the Perth rink. This was taken by Erwin Sautter. Ron Northcott is holding the Silver Broom itself (minus its stand). Bernie Sparkes and Dave Gerlach are holding the winners banner - presumably their names would be embroidered on to this later. All four are holding boxes, containing individual awards. And the Earl of Elgin, the President of the Royal Caledonian Curling Club, is about to present each with another momento of the occasion.

A couple of final points. The Silver Broom trophy shown above was awarded from 1968-78. A newer trophy was awarded from 1979-85, see here. Air Canada, over the years of its curling sponsorship, produced promotional films of the various championships. I wondered if they had begun to do this by 1969. It appears so. The Moving Image Archive of the National Library of Scotland in Glasgow's Kelvin Hall may hold a copy (see here), although only a clip is available, and this only accessible at the Kelvin Hall. I wonder if it has been digitised elsewhere? 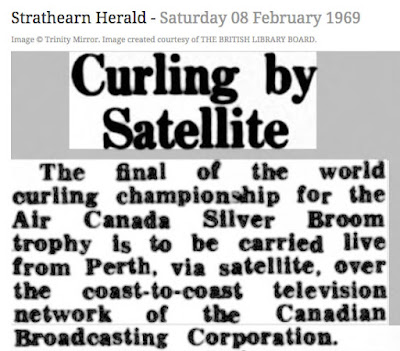 The final was apparently televised too, and transmitted live by CBC, according to this local newspaper report. I wonder if the broadcast was archived, and has survived?

Photo origins are as indicated.
Posted by Bob Cowan at 11:25