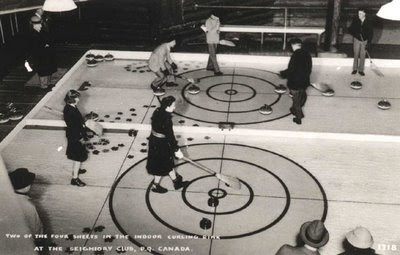 I added this post card to my collection recently. It's a real photograph, published by Photo Services Limited of Montreal, showing curling at the Seigniory Club, Quebec, Canada. It predates 1959 when the card was sent in the mail.

But look closely at the content. The ladies on the rink nearest the camera are playing with irons. By the look of these they are the smaller of the two sizes of irons played with in the middle of last century and, as I recall, weighed about the same as a curling stone. The men in the background are playing with stones.

Bonspiel (the History of curling in Canada, an on line resource from the Library and Archives Canada) says this about irons: "Quebec has had a long tradition of using iron curling stones as a substitute for granite. This came about because there were problems getting granite stones from Scotland. The iron stones were made at a forge in Trois-Rivières, Quebec. John Kerr, in his History of Curling, says that these stones were shaped like huge teakettles, weighed 46 to 65 pounds each and were owned by the clubs.

Quebec and the Ottawa Valley used iron stones in regular play up until about 1955, when they were replaced by granite stones, thus putting Quebec in step with other parts of Canada and the rest of the world. The use of iron rather than granite was a sore point and caused problems in organizing games and bonspiels (tournaments) for Quebec teams. The Ladies Curling Association of the Canadian Branch of the Royal Caledonian Curling Club held annual competitions for the Lady Tweedsmuir Trophy, and irons continued to be used in this competition up until and including 1953."

Did you notice the 'leaves' in the ice?

Hi Bob & David,
This is a very unique post card as it shows both the irons and the granites being played.The ladies are playing with irons that would have weighed 32 lbs.Mens at that time would have been 62 lbs. There were several foundrys that made the irons some I'm sure were in Eastern Ontario. Several years ago someone told me that the Findlay Foundry in Carleton Place ON. attemted to produce an iron but did not succeed. There was a lot of contoversy when they did away with the irons both in Quebec and Eastern Ontario.The last club I heard that was still using the irons was the Army Base @ Petawawa in 1958. Notice the sash the lady is wearing ,this is called a Centure Fleche and these are often seen in the old curling pictures. Several years ago I was curling at Montebello(old Seignery club) and in the lounge they had used the ladies irons to make bases for the ashtrays...so much for some interesting Canadiana..Great site.
Shirley Adams...yes it's me at long last..