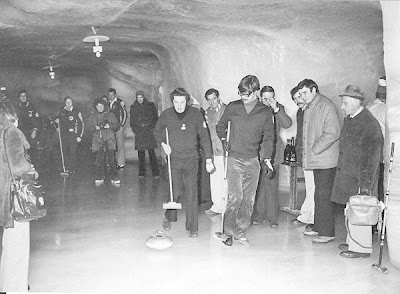 It’s now more than thirty years ago that a remarkable curling match took place. Near the top of the Jungfrau in the Bernese Alps and close to the Jungfraujoch station of the Jungrau Railway is a cavern, or as some advertisements put it, a cathedral, or a palace, carved out of the ice of the glacier there.

During the Grindelwald Bull competition in 1977, Jim Gardner, Calwell Loughridge, John Grant and I, all members of the Abbotsford Curling Society, took some time off from our busy schedule to inspect this large hole in the ice. We all thought it might be great fun to have a game away up there but there wasn’t time that year. The next year I was unable to go and the rink with a Smith-substitute played in the bonspiel under the flag of Ballindalloch CC, which was only right because it was well fuelled throughout by that product of the distillery situated at Ballindalloch, Glenfarclas.

That year the arrangements were successful and two rinks, that of Ballindalloch and a local rink skipped by Hans-Peter Glarner, plus some Scots umpires, took their stones up the railway with them to the cavern to play what they claimed was the highest game of curling ever played. They were 11,333 feet above sea level.

The photograph above shows Calwell and Jim ready to sweep a John Grant stone, while Hugh Lyburn, then of Wigtownshire and now of Brandon, Manitoba, looks on. All I learned about the game was that it had been great fun and that the score was a diplomatic 6 all. Whether the word peels was added to the Grindelwald/Swiss vocabulary I do not know.

I wonder, however, whether their claim is correct. 15,000 feet up Mount Kenya beside the Lewis Glacier there is a small lake called in all the books the Curling Pond. In Kenya Mountain, 1926, the author EAT Dutton describes his companion, JD Melhuish, skating on the Pond, and causing consternation among the porters who had never before seen a 'white man dancing with knives on his feet'. In The Mountain Club of Kenya Guide to Mount Kenya and Kilimanjaro it is said that Dutton taught Melhuish to curl on the Pond in 1919. The report is silent as to who carried the curling stones to that great height, and as to their number. 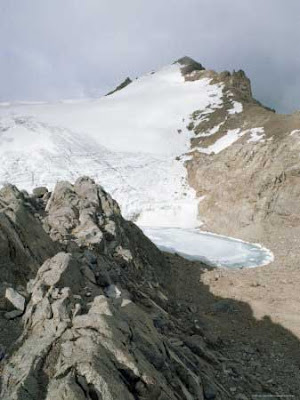 Found on the web. This is apparently a Jack Jackson photo, for sale as a hi-res poster image here. It is captioned 'Point Lenana, 4985M, and the Curling Pond, from Top Hut, Mount Kenya, Kenya'.
Posted by David Smith at 00:01