The Diaspora of the Duddingston Medal 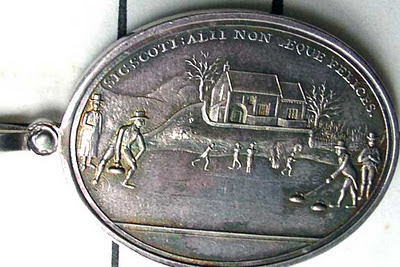 David B Smith writes, "It is often said that the influence on the game in Scotland of the Duddingston Curling Society was great; some evidence for that can be seen in the number of Duddingston medals that belong to other curling clubs.

Perhaps the fact that the society set down its 'Rules in Curling' in 1804, and had them printed so that they could be promulgated throughout the land, was the most important feature of its influence, but there can be no doubt that curlers in other clubs found the medal an attractive addition to the game.

When the decision was made in 1802 that 'a medal with proper insignia' should be struck 'to distinguish the Members from any other gentleman' and that purchase of the badge should be part of the entrance fee, the way was opened for the creation of lots of medals.

The design – a small oval of silver with curlers on Duddingston Loch in front of the Kirk below the motto 'SIC SCOTI; ALII NON AEQUE FELICES' - struck a patriotic note. The motto means – roughly translated from the Latin – 'this is the way the Scots play: the rest of mankind isn’t equally lucky'.

On the reverse of the medal were struck the words: 'Duddingston /Curling Society/ Instituted/7th. Jany. 1795'.

Some time after 1825 when the octagonal curling house was built on the edge of the loch a new version which included that building was struck but the minute book is silent about this matter.

As the fame of the Society grew in the decades after its foundation in 1795 and more and more influential curlers from various parts of Scotland became members, and therefore owners of a medal, the currency of the Duddingston Medal grew throughout the country. It must have been these members who donated examples of the medal to their 'other clubs'.

What some clubs did was to use a Duddingston medal, suitably customised, as either a prize for one of their existing competitions or as a trophy.

Three examples exist of the former use by Merchiston CC. They date from 1821, 1830 and 1832. In these cases the reverse of the badge has been buffed smooth and engraved 'Merchiston Prize Medal' with the winner’s name and date. Two of these are in the collection of National Museums of Scotland and one is in mine.

Drum CC went a bit further, for in their case the original oval badge was incorporated into a circular medal, on the reverse of which was engraved the legend that the winner had won it for gaining the club’s gold medal, presented in 1820. The first prize version is dated 1826, but that there was a tradition of presenting them becomes clear when one sees a version of 1855 which maintains the same design, engraved onto the silvered copper of the medal, because, it seems clear, the supply of the original silver badges had by this date run out. (Both are in my collection.) 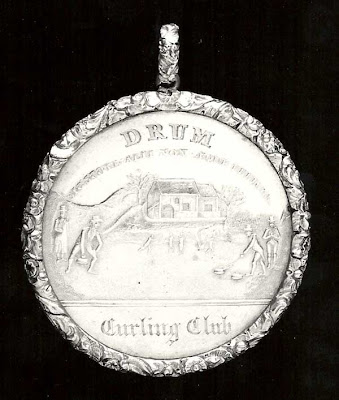 A number of examples of the use of the medal as a trophy still exist.

Largs had a Duddingston medal of 1802, with a new border of thistles, presented in 1828 for points by John Cairnie, who was a member of the Duddingston Society. (It is in my collection.) 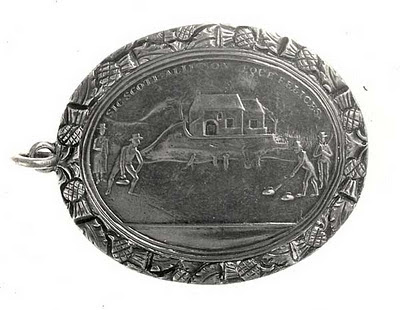 Carnwath CC was formed in 1832, and its first trophy appears to have been a post 1825 Duddingston medal adapted by the addition of an applied border of thistles and foliage, and by the buffing of the reverse and the engraving of: 'Presented by Alexander McDonald Lockhart to the Carnwath C.C. 13 September 1832'. Lockhart was also a member of Duddingston. (It is in my collection.) 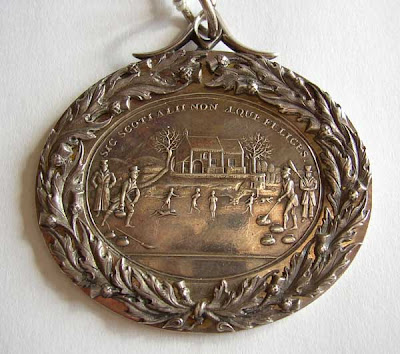 Fenwick CC had a Duddingston medal, post-1825, the back of which has been buffed smooth and engraved: 'Fenwick Curling Club 1834'. (It is in my collection.)

Crawford had a post 1825 medal donated in 1835 with this inscription on the reverse: 'For Auld lang syne/Presented/ to the/ Curlers of Crawford/ by/ Thomas Johnston,/ to be/ Played for Annually/ Single Handed.” (It is in Gladstone Court Museum, Biggar.)

Kirkcowan CC still has a Duddingston badge of 1802, with this inscription on the reverse: 'Presented/ to the /Kirkcowan Curling Society/ by/ W C Hamilton Esqr/ Craighlaw /8 Jany. 1840'. The club’s minutes record: "In January 1840 Captain Hamilton presented the Society with a Superior silver medal to be played for Single Handed every year."

A Duddingston medal , engraved 'West Linton. Prize Medal' was sold by Baldwin’s in 1994.

All of these medals appear to have been given while the Duddingston Society was still active. It came to an end about 1853. It is rather surprising therefore to discover that as late as 1886 it was still thought to be appropriate to give one as the trophy for a points competition.

Some years ago I found the two newspaper references which I print below. It was thrilling to acquire recently the very medal to which they refer. 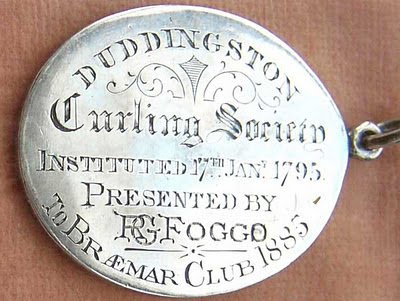 Aberdeen Weekly Journal., 1886, 26 February:-
“BRAEMAR CURLING FOR AN ANCIENT MEDAL. – A handsome silver medal, nearly 100 years old, lately presented to the Braemar Club, was the subject of competition on Castleton Pond on Wednesday last. The ice was in good trim, and neither bumped nor biased to any tangible extent. Twenty-one candidates drew tickets for the contest, which was throughout strongly marked by real curler’s zest, not omitting the higher qualities of practical skill and science. The match was one by points, and after the usual course of play, the contest closed in a tie of 11 points a-side in favour of John Aitken, carpenter, and John Mackenzie, coachdriver. On the tie being played off, Mackenzie won the trophy, with which he was duly presented, after a felicitous address of a commendatory nature by the president, Mr Kames Aitken, banker. After the winner, who cordially returned thanks, and whom many readers will readily recognise as the careful and attentive driver of the Braemar evening coach between Ballater and Braemar, had been cheered to the echo, the company divided and played a friendly match, the leading skips being the medallist and the losing tieholder:-…It deserves to be added that the mystic medal, whose appearance sweeps back into the last century, and to the period when curling was at least a recognised institution, and also to some extent in the south of Scotland as a national game, instead of being round, is nearly oval in shape; aand perhaps by a modern jeweller might be called crude in workship. On one side it shows the facsimile of Duddingston Loch, Edinburgh, with curlers at play, and on the obverse are the inscriptions: - 'Duddingston Curling Society, instituted 17th January, 1795. Presented by R,G, Foggo to Braemar Club, 1885.'

1887, 30 Dec., Aberdeen Weekly Journal.
“BRAEMAR. – SILVER MEDAL COMPETITION. – The first match of the season by points, played under the new rules issued by the Royal Caledonian Club, came off on Auchindryne Pond on Tuesday last. The ice was so exceedingly keen that scoring was not nearly so good as otherwise might have been. The medal contested for was a present to the club from Mr R.G. Foggo, factor to Colonel Farqhuarson of Invercauld, and is a piece of last century workmanship illustrative of the roaring game. Apart from its intrinsic value, it is an object of historical interest. Twenty six of the brethren entered the list for the trophy, which, after two hours’ play, was carried off with a score of 19 points by Mr John Lamont, …”

Captions.
• The obverse of the 1802 medal.
• The obverse of the Drum medal. The Duddingston oval has been incorporated into a circular medal.
• The Largs medal.
• The Carnwath medal. This is a particularly sharp striking which displays the curling house clearly.
• The reverse of the Braemar medal. It appears that the engraver had forgotten the second initial of the donor’s name and has had to squeeze it into what he had already engraved. He seems also to have omitted the A of Braemar and has had to add it to the E.

Illustrations © David B Smith
Posted by Bob Cowan at 10:51