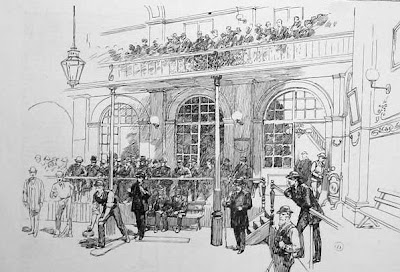 While my colleagues have recently been spending time and energy finding the precise – and not so precise – locations for curling places in England, I have been wondering about the earliest machine-made ice used for curling in that part of these islands. I refer, of course, to the Glaciarium at Southport in Lancashire.

This ice rink was opened in 1879 and provided ice for skating and curling. From the start 'the Roaring Game' was encouraged by the presentation of a handsome silver shield for which the first competition took place over three days in September 1879. Of the twenty-two English clubs that belonged to the RCCC in 1879, twelve played in the opening competition with two rinks each. Glasgow Lilybank also fielded two rinks and were beaten in the final by Manchester. The Glaciarium did not, however, fulfil the hopes of its proponents and it closed its door after about ten years, despite the efforts of the Royal Club to patronise it by holding their AGM there in July 1885.

That the game and its traditions had passed unchanged into the foreign soil of England is pretty well evidenced by the following poem, which comes from George Hull's The Poets and Poetry of Blackburn, 1902, and was written by Joseph Jardine. The surname betrays his Scottish parentage, though he was born in Blackburn; he was the president of the Burns Club and honorary secretary of Blackburn Caledonian Curling Club. Here is his poem.

They say that wonders never cease – and, faith! I think it's true,
For there's scarce a day that passes but we hear o' something new.
The electric light will banish night – so Edisonians cry;
And now to crown the wondrous list, we've curling in July.

And here I am constrained to tell – methinks no trifling theme -
How at the shore our gallant boys met Preston's chosen team.
Fully equipped wi' broom and stane, they started in full glee,
With buoyant hearts and courage high, intent on victorie.

For skips – there was Ayrshire Willie, a gey auld-farrant chiel,
The whom nane better lo'es a joke, or a guid roaring spiel;
“Gie me but Connell.” and he says, “Whatever may betide,
Be it drug or keen, or rough or smooth, I'll whip the countryside.”

The next was Yates, the quiet man – a true man all the same -
And though he taks it quietly, his heart is in the game:
Well known and well respected, and, though he will not boast,
A keen, keen curler, and a skip who's always at his post.

Last but not least was brave Buckley – to gie him his just dues,
He's a chiel that always likes to win, and always hates to lose;
But he pulls his grim moustache at times at sic a fiery rate,
Spectators in amazement stand, and tremble for its fate.

Arrived – Tam told the Preston men “their skill would be no use,
As he'd wi' him the finest rink that Blackburn could produce.”
But when Preston gained an end or two, poor Tam grew unco still,
All stared at him, and all agreed he looked strange and ill.

“Look ill! Look ill! Wha tell't ye sae?” Tam answered wi' a frown,
An' Then he swallowed lemonade to wash the paleness down,
But 'twas in vain; and stronger stuff, it wasna to be had,
So Tam made shift wi' lemonade, but swore it was too bad.

The Glaciarium, Lourie says, “It is an awfu' spot,”
For though his feet were cauld as ice, his head was hissing hot,
And raised a mist that grew so thick, Gibson began to hog,
And swore he “couldna thraw his stanes through sic a drenchin' fog.”

Then Jamie Yates and wee Kit Wells, they couldna weel agree;
Yates, he declared “that Kit wad stand naewhere but on the tee”;
In vain he prayed, in vain he stormed, Kitty just jumped and roared
That if they had taken his advice Preston wad ne'er had scored.

I needna gi'e ye mair details: suffice it then to say
They played a weel-contested game, and Blackburn won the day.
The sun had set an hour or mair, the stars shone clear and bricht,
When the Blackburn Caledonians arrived at hame that nicht.

As Connell and Archie arm in arm walk'ed down Ainsworth Street,
Baith were sae glad that they had won, they couldna help but greet;
Their brooms did them such service then as they'd ne'er done before,
As solemn and slow they marched till they reached the elder's door.`

And there they stood. Said Archie then, as he held out his hand -
“Willie, we'll play aught there is in this or any other land.
Play them! ay, whae'er they be, Scotch, English, a' the same,
On real or artificial ice, for ony sum they name.”

And here Gillespie joined them, who led sae weel that day;
They quieted Archie doon a bit, and led him safe away;
Then 'twas agreed they'd a' adjourn to a neighbour's hoose awee,
To talk the day's proceedings ower, and taste the barley bree.

They sat them down in richt good trim – weel oiled, their tongues grew loose,
They joked and laughed, and sang, and quaffed, and soon got unco crouse;
But when they rose to dander hame the nicht was weel-nigh through,
And the bottle it was empty, but the boys were roarin' fou.

Thus ended this eventful day; but ane thing weel I wot,
The stanes will roar o'er ice galore ere this bonspiel's forgot.
Then fill the glass, round let it pass – nae heel-taps, drink it fair;
Here's to the game that bangs them a', and to curlers everywhere.

The curlers named in the poem were all members of the Caledonian CC, as can be deduced from the RCCC Annual for 1880-1881. 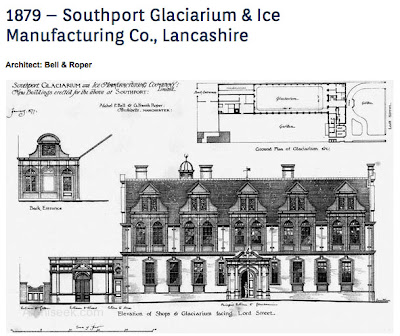 This is how the Glaciarium looked. The ice hall extended back from the facade. The illustration is from this website.

Top: Curling at the Southport Glaciarium is from the Illustrated London News, 1885. You can see more of what the rink looked liked inside, from a letterhead in the Holden archive, in the special collections of Bradford University. This shows skaters using the facility, see here.
Posted by Bob Cowan at 10:11