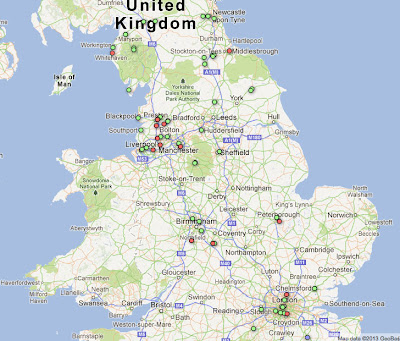 Last year I was excited to find evidence of curling at Leamington Spa, in England, in the early years of the twentieth century, see here. An old postcard kindled an enthusiasm for finding out more about our sport south of the border, so I joined the 'team' that has been working on the English Curling Places map, which can be found on the Historical Curling Places website. Skip is Lindsay Scotland and vice is Harold Forrester, both bringing their own special expertise to the project. The front end, and head of the 'supporters', is John Brown who, as secretary of the English Curling Association, is committed to promoting research on the sport in England. Coach of course is David B Smith, fellow Curling History blogger, who started things off compiling a database of Scottish curling places some twenty years ago.

The number of places on the English map has grown considerably in past months to over seventy sites, and is still a 'work in progress'. As on the Scottish map a green dot indicates a place that can be precisely identified. A red dot says that the location is as yet imprecise. And a blue dot locates a place where curling is currently played on a regular basis. There is only one such dot on the English map - Fenton's Rink, in Kent. It is planned that supplementary web pages, containing additional information, will link to the map locations.

How is information about curling places tracked down? There are a number of ways. Firstly, there are references to games taking place, with venues indicated, in national and local newspapers, in books, and in the Annuals of the Royal Caledonian Curling Club. As more and more old newspapers are digitised and put online, as here, and here, the social history of our sport is made available to any with the patience to search.

For example Bell's Life in London and Sporting Chronicle, an English weekly sporting paper published between 1822 and 1886, when it was absorbed by Sporting Life, had some coverage of curling in the later years of its existence. There were reports of the activities of the Malton curling club, and of the two Newcastle clubs (Newcastle and Newcastle Tyneside). In January 1886 there were three mentions of curling at Aske Hall, near Richmond, North Yorkshire, the home of Lawrence Dundas, the 3rd Earl of Zetland, and MP for Richmond, who would become the 1st Marquess of Zetland in August 1892.

The first mention is in the newspaper of January 20, 1886. This says, "Fashionable parties were skating on the Aske Pond. Later in the day the pond was swept and flooded for hockey matches and curling between Darlington and Keplin (sic) today (Wednesday)." 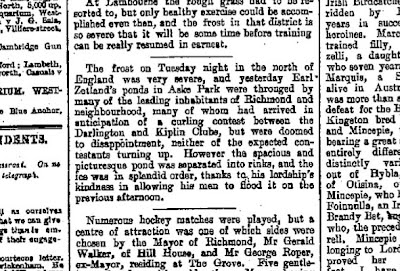 On Thursday, January 21, the newspaper reported (see above) that rinks had been laid out in Aske Park for a match between Darlington and Kiplin curling clubs, the spelling of of the latter club's name having been corrected. However, neither side turned up!

The match between Darlington and Kiplin did go ahead a couple of weeks later, and Bell's Life in London and Sporting Chronicle duly reported the result on February 5. Each club was represented by two teams with Darlington being victorious in both games played, by 24-11 and 19-14. The names of the players is not recorded. However, Aske Park is now 'on the map' as a place where curling took place in the nineteenth century.

The Darlington club had become affiliated to the Royal Caledonian Curling Club in 1878 and in later Annuals it is noted that it had been instituted in 1860. So where did Darlington curlers call home in 1886? Pierremont Park is one possibility, and this webpage has a photograph of curlers on the lake in the 1880s. There are other places for you to explore on the map in and around Darlington where there is evidence for curling having taken place.

The reference to a Kiplin curling club is intriguing. It does not seem that a club with this name ever became a member of the Royal Club. Do any records exist for the club? Was it connected with Kiplin Hall near Catterick? Can YOU help? It is mentioned alongside other north of England clubs such as Newcastle, Durham, Darlington and Malton in old newspapers, but further research remains to be done.

There were certain conditions that a curling club had to fulfil before it could become affiliated to the Royal Club. From the 1850s the General Regulations of the Royal Club stated that "Any Local Curling Organisation shall be admissable into the Royal Caledonian Curling Club, if it consists of at least eight Members, have a designation, and sheet of Ice for its operations, and be governed by Office-Bearers under a code of regulations." (My emphasis)

This implies that all the English curling clubs (as well as those in Scotland) that are listed at various times in old Annuals must have had a 'curling place'! This requirement that clubs had to have their own ice to play on remained in the Royal Club regulations until the 1936-37 Annual, but disappears after that. By this time of course most clubs were curling indoors in ice rinks, although some still maintained an outdoor pond, as indeed some clubs still do even today.

So, do we know where each English club listed in old Annuals had their own pond? No, but the question can be a good starting point for research. You might ask, "Why was Wigan and Haigh so called?" The club was formed in 1861 and admitted to the Royal Club in 1863. Haigh Hall was the English home of the Earl of Crawford and Balcarres, and indeed Lord Lindsay is listed as a Patron of the club in the 1874 Annual. 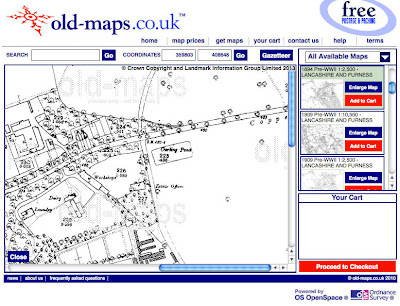 This screenshot of a 1894 map, from the very useful Old Maps website, clearly shows the curling pond in the grounds of Haigh Hall. It still exists. It is mentioned on a recent leaflet describing a walk around the restored windmill in the grounds, which can be downloaded from this article, which says, "Continue past the junction with new road, through the trees on your right is the Curling Pond, constructed in the 19th Century for use in winter for the sport of Curling." All evidence for another 'curling place' that can be precisely located.

Aside from information in newspapers and old Annuals, there are other sources of curling lore. Personal recollections are an example. John Brown has been in correspondence with Ray Smith, who was a member of Blackburn CC, sadly now defunct, and knows much about the club's history and where the members played. (Incidentally, Ray has donated a wonderful old trophy, in the form of a curling stone toddy kettle, to Blackburn museum, see here.)

I've been communicating with a local historian, Maureen Fisher, whose interest in Frizington has helped reveal the existence of a Frizington curling club, and indications of where the Cleator Moor club might have played. Such help has led to new curling places being identified and being put on the English map. 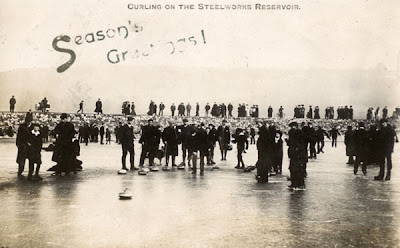 Sometimes lady luck plays a part in discovery. I came across by chance on a dealer's website this postcard of 'Curling on the steelworks reservoir', sent from Barrow-in-Furness, on Jan 1, 1908. The Barrow-in-Furness Caledonian curling club was founded in 1878 and admitted to the Royal Club in 1884. It was still listed in the 1909-10 Annual. And the reservoir can be seen clearly in the Barrow steelworks in maps of the time. Another 'place' for the map.


The photo itself is interesting. Just one game seems to be in progress. There are skaters in the background, and at least two of the spectators are wearing skates! It is not the most attractive of photographs, and surprising that it has been overprinted with 'Season's Greetings!' It was sent to a Miss Cole in nearby Millom and says, "Wishing you a very happy New Year from D Dawson." I wonder why he (I'm making the assumption) picked a curling photograph to send to Miss Cole?

A spot on the map is, of course, just a doorway to finding out who played there, and what life was like for the curlers of the time. For example, the Liverpool curling club had its own pond at Rainhill. It was near the railway station and could host up to four matches at the same time. I've learned recently that the curlers used the railway to get to and from the pond. Some curling occasions raised funds to help those less well off. Whereas Scottish clubs are often recorded as providing 'meal and coals' for the poor (see the mention in this post), the Liverpool curlers provided lobscouse (a local stew) and clogs.

Of course, these nineteenth century curlerswere not without their frustrations. It is recorded (in The History of Curling: and Fifty Years of the Royal Caledonian Curling Club by John Kerr, (David Douglas, Edinburgh, 1890), in the chapter on 'Curling Furth of Scotland'), that an entry in the club's minute book reads, "July 11, 1872. The secretary was instructed to write to Mr Roby, Rainhill, respectfully to request him to keep his duck off the curling-pond." A hazard that, fortunately, curlers today do not have to face indoors! Kerr's book has been digitised, and you can find that reference online here.

But the mention of curling club minutes raises the question. Where are they? All clubs would have kept minutes. Have these priceless records of curling all been thrown away? Or are they still waiting to be found in cupboards or dusty attics, or even in local archives? Can you help?

Lindsay Scotland's email address is here, if you can add anything to the Historical Curling Places database.
Posted by Bob Cowan at 13:10