The GB Curling Team at the 1924 Olympics: The Story Continues

I recently wrote extensively about the curling competition at Chamonix in 1924, the beginning of the sport's Olympic story, see here. The gold medals were won by a GB team, after a round robin involving just three countries, Britain, Sweden and France. Willie Jackson (skip), Robin Welsh (3rd), Tom Murray (2nd) and Laurence Jackson (lead) won both their games to become champions.

I explained how the Jackson team had been selected by a special committee of the Royal Caledonian Curling Club. The selectors wanted to send the best possible side to the Olympic event because, at that time, it was thought that North American and Swiss teams would participate, and that the competition would be much larger and the competition much stronger than it eventually turned out to be.

I wondered if the selected GB team had played together before Chamonix 1924. Three of the members certainly had. Willie Jackson with Tom Murray as his third had recorded a number of successes, some with Willie's son Laurence Jackson also in the team. Robin Welsh, a successful skip in his own right, had seemingly been brought into the side just for the Olympic event. The four would have known each other well, but when I wrote about them last November I had no evidence that they had played together before Chamonix. Now I have. They had been successful as a team, on at least one occasion, before they headed to France to take part in the Olympic competition. 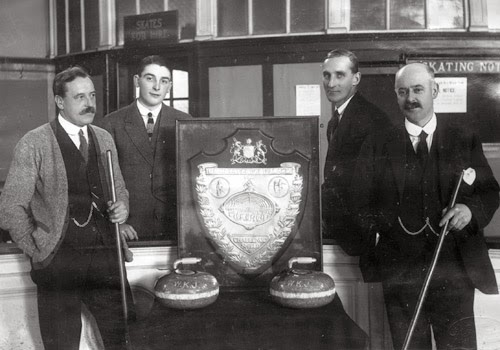 Here is the Jackson team in a photo taken in 1922. Left-right: Robin Welsh (3rd), Laurence Jackson (lead), Tom Murray (2nd) and Willie Jackson (skip), with the Ice Palace Shield, the trophy for a competition played at the Manchester Ice Palace which they won in March of that year. The team had travelled from Scotland to Manchester to take part. They beat a local team skipped by Eric Cowper in the final, 14-3.

The Manchester Ice Palace opened in 1910. It was used extensively for skating and ice hockey. During the First World War it became a munitions factory. Between the wars the rink was heavily used. In the 1936-37 season, for example, Manchester Ice Rink (as it was called then) was the only venue in England for indoor curling. The curling day was Thursday, with skating on all other days. In the Second World War, the building became an aircraft repair shop. It closed its doors in the 1960s. The building still stands in Derby Street, Cheetham, Manchester. The full history of curling at Manchester Ice Palace and of the Ice Palace Shield competition remains to be written.

Here, I would just say that it was in September 1911 that the Ice Palace Company, Manchester, presented 'a handsome challenge shield' for competition by members of the English Province. A Belle Vue rink were the first winners, the team skipped by W Wilson, with F B Buchanan, W Ferguson and J S Anderson. After a hiatus during the war years, the competition became an annual event again, and, as we've seen above, was won by the Willie Jackson team that would go on to play in the first Olympic curling competition two years later. An advert in the Royal Caledonian Curling Club Annual in 1936 shows that the Ice Palace Shield was still a competition that was open to all curlers.

What happened to the Shield after the Manchester Rink closed? I learned recently that it has survived and is now the prize for an annual match between the Preston and Glendale curling clubs. It has already been played for this season and was won by the former club. 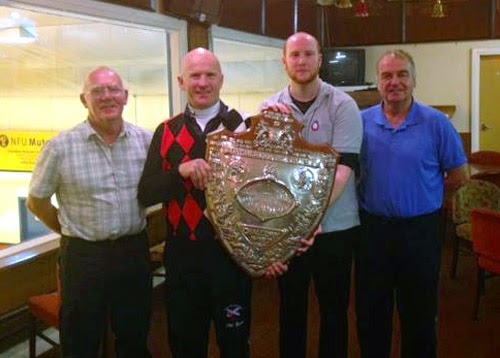 The photo of the Jackson team comes from a scrapbook kept by Tom Murray, now in the care of his great granddaughter, and reproduced with her permission. The photo of the Preston team is courtesy of Phil Barton. Thanks too to Frank Kershaw and John Kerr for additional information about the history of the Ice Palace Shield.
Posted by Bob Cowan at 16:07