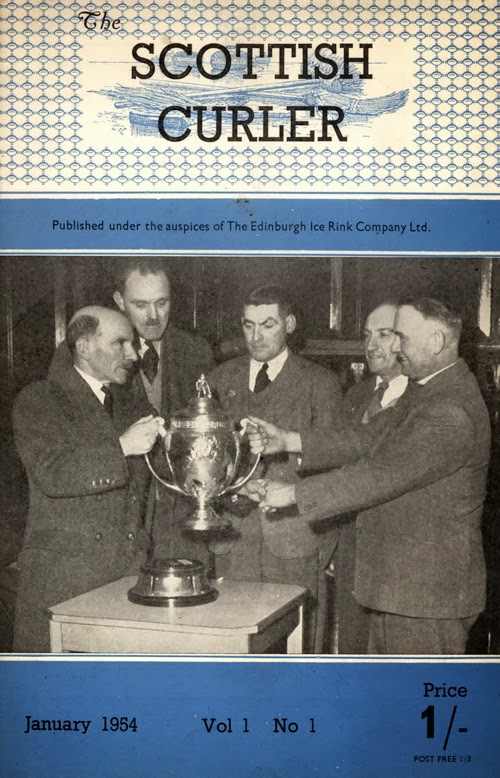 January 1954 saw the publication of Scotland's first curling magazine, the Scottish Curler. I feel privileged to have been the Editor of the magazine for seven seasons during which time it celebrated its fiftieth year, and so I have been aware that, had it survived, this would have been its sixtieth birthday.

The first issue of the magazine was composed of twenty-four A5 pages, and was printed and published by the Stanley Press, Elder Street, Edinburgh. It cost one shilling, and a subscription form was included. This indicated that a year's subscription (nine issues) was eleven shillings, including postage. This sum could be remitted by Postal Order.

The Editor was not named in the first issue, but we know now that this was Robin Welsh, who wrote an editorial column, and continued to edit and produce the magazine for forty-four years, until 1998. He became secretary and treasurer to the Royal Caledonian Curling Club in 1958, and was awarded MBE in 1984 for his services to the sport. He died in 2006. Read an obituary here.

Let's look at Volume 1, Number 1, to see what were the newsworthy stories in January, 1954.

Five pages of the magazine was devoted to 'The World's Championship' as the Edinburgh International was called at that time. The competition was won by Willie Young's Airth rink of John Pearson, J Scott and Bob Young (see the cover photo), who beat John Robertson, G Lindsay, W Struthers and Dr Dow, 16-6 in an final of thirteen ends, on Saturday, December 5, 1953. It had been agreed that the final was to be fourteen ends, rather than sixteen as in previous years, but when Young's team counted six in the first end, it turned into a one-sided game, and did not go the distance. Eighty-eight teams took part in the competition. 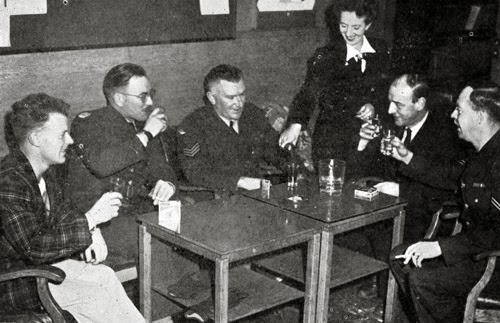 Four 'Canadian airmen' who were stationed in Germany had arranged a trip, thanks to the Royal Caledonian Curling Club, to 'sample the brand of curling in Scotland'. Here they are in the lounge at the Haymarket rink sampling Scotland's national drink. L-R: Douglas Nelligan, Duncan McLeod, William Elgie, Moira (pouring a dram), James Sellar (the Haymarket rink manager) and Ted Austin. 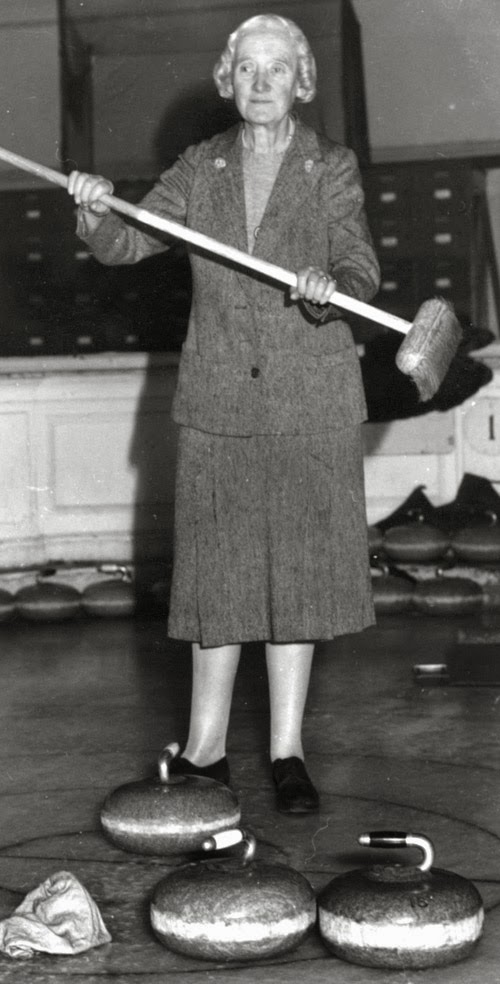 This image, of 'Mrs Menzies', who was the secretary of the Edinburgh Ladies CC, accompanied an article entitled, 'WOMEN ON THE ICE: LADIES NOW USE MAN-SIZED STONES'. Sixty Edinburgh ladies played every Tuesday afternoon at the Haymarket rink in season 1953-54, and there was a waiting list of sixteen to get into the club. The article stated that the club had never been stronger. That was borne out by the fact that, in inter city matches against Glasgow (since 1930) and against Perth, Falkirk and Kirkcaldy (since the end of the war in 1945) and  the club had only been beaten once on their home ice. That one loss had been to Perth.

The Edinburgh Ladies had ceased to play with smaller stones - Crawfordjohns, some of which had weighed less than 30 lbs. "The modern Miss and Mrs play with stones which average 38 to 40 lbs, and Mrs Menzies, who gives Glasgow credit for the change, believes this to be one of the fundamental reasons for the big improvement in ladies curling in recent years."

Other articles included one about curling families, and about the sport in Sweden. In 1954 that country had some 900 curlers, all playing on natural, outside ice. There were no indoor rinks in Sweden at that time, according to correspondent E A N Bennetter.

There were two pages of 'Curling Stories - Ancient and Modern', and a feature about 'The most famous curler of them all', Willie Jackson of Symington. Jackson, who was eighty-three years old in 1954, was described as retaining 'the breadth of wisdom, which, allied to his skill, set him above his contemporaries'. Readers of this blog will know W K Jackson as the skip of the GB team at the first Olympic curling competition at Chamonix in 1924, winning the gold medals then with his team of Robin Welsh (the Scottish Curler Editor's father), Tom Murray and Laurence Jackson. Laurence Jackson, the youngest member of that side, was still playing competitively thirty years later, and skipped a team at the 1953 World's Championship, as reported in the 1954 Scottish Curler, losing in the semifinal to Willie Young. 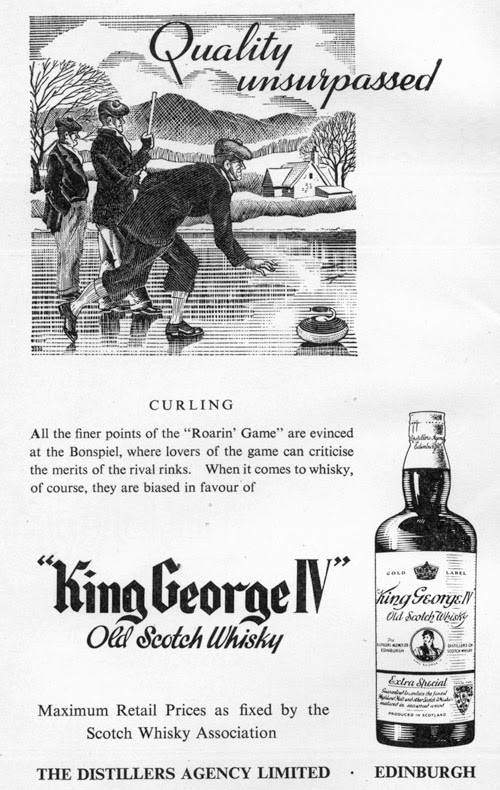 The early years of the Scottish Curler were well supported by advertisers. The January 1954 issue had two with a curling theme, such as that above ... 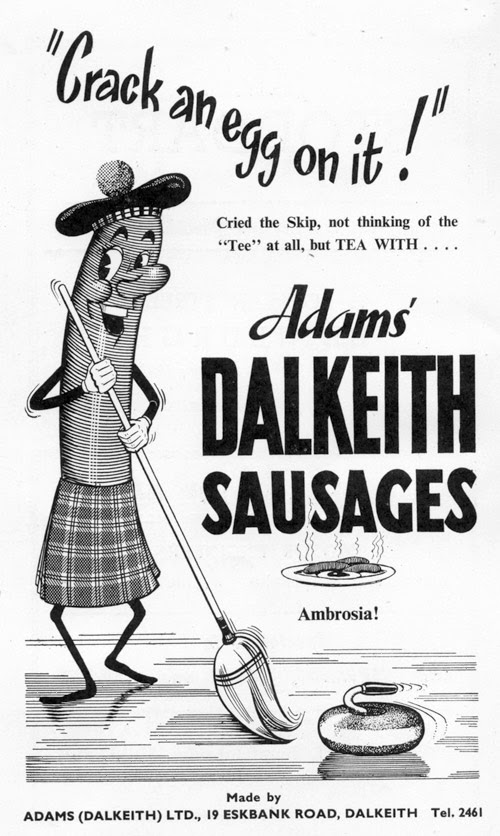 ... and this one! All advertisers were acknowledged with thanks in the Editorial: The Scottish National Institution for War-Blinded; The Distillers Agency Ltd; Adams (Dalkeith) Ltd; Andrew Kay and Co; W and J Russell; John Millar and Sons Ltd; Galbraith and Roy Ltd; St George Motor Garage; J B Alexander Ltd; W B Morrison; Dymock Howden and Co; James Stoddart; Shannon and James Ltd (Waverley Laundry).

Images from Bob Cowan's archive.
Posted by Bob Cowan at 12:38