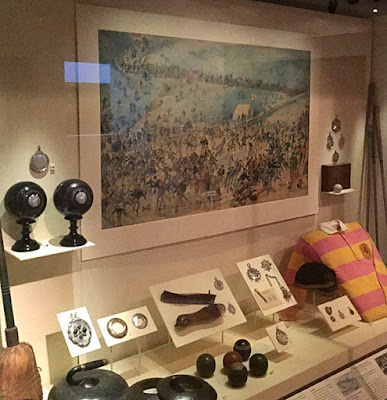 In the National Museum of Scotland in Edinburgh can be found an interesting painting. It forms a backdrop to a display of sporting items, including a pair of curling stones, a broom and a spectacular medal. It is described as a 'Watercolour of winter sports on a frozen Duddingston Loch', and was painted by Charles Altamont Doyle. The museum reference dates it to 1876. 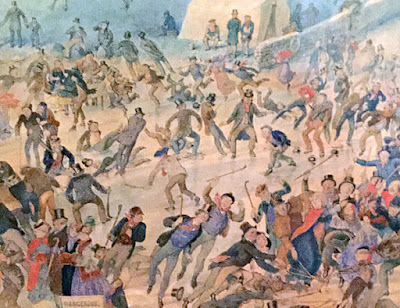 There's just so much going on in the painting. But in the midst of all the skaters and spectators, there's a curling match in progress!

You may never have heard about Charles Doyle, but you will know of his son, Arthur Conan Doyle, much loved author of the Sherlock Holmes stories.

And regular visitors to this website will have seen another of Charles Doyle's paintings. The sidebar has an image of David B Smith's book, Curling: an illustrated history. David provided a Doyle painting, which he owned, to be used on the cover of his book. 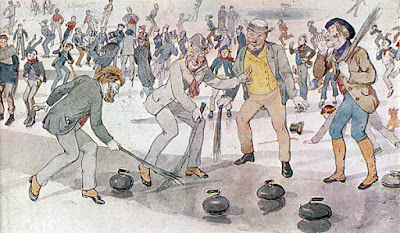 Here's that image in detail. To be honest, I was never a great fan of Doyle's paintings, although in putting this blog post together, and learning about the artist, I've come to appreciate them a bit more. I can certainly appreciate the humour therein. Look to the top left where Doyle has included the legs of someone who has been upended on the ice! And one has to smile at Doyle's depiction of the four curlers!

I discovered recently that the image on the book's dust jacket is just part of a larger painting, above, which has additional detail on both sides. According to the information on the dust jacket the painting is dated 1862.

Charles Altamont Doyle was born in 1832, the youngest son of John Doyle, a well known cartoonist of the time. At the age of seventeen he obtained a job in Edinburgh as an assistant surveyor in the Scottish Office of Works. According to Simon Cooke (see here) he held a variety of related jobs there and supplemented his income with his art and illustrations.

He married Mary Foley in 1855, and they raised seven children, the eldest of whom was Arthur Conan Doyle.

Drink seems to have been Doyle's downfall. His health suffered in consequence, and in 1876 he lost his job at the Scottish Office of Works. He was committed to the mental institution in Montrose in 1881, and he died in 1893, aged 61, in the Crichton Royal Institution, Dumfries, having spent the final years of his life there. Simon Cooke suggests that he may have been committed to the Crichton as a way of treating his alcoholism rather than because of a specific mental illness.

An extensive biography of Charles Altamont Doyle can be found here, on a website that contains many resources for anyone interested in this 'fantasy artist'.

There's a self portrait sketch of the artist, from 1848, here. 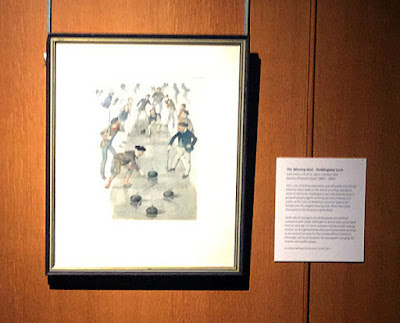 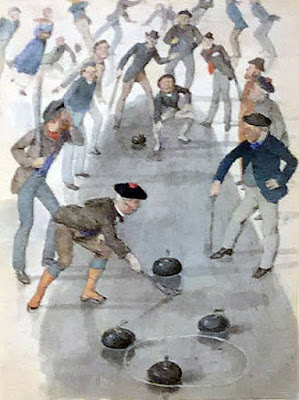 Here's a close up of this painting. Significant is that the players are shown using broom 'kowes', and that a circle has been scratched on the ice. 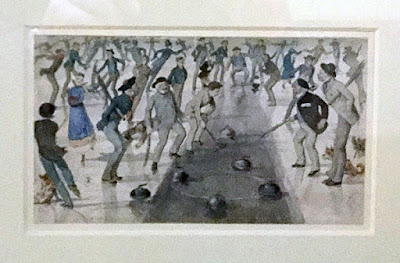 This painting, on loan from the City Art Centre, is currently on display in the Scottish National Portrait Gallery in Edinburgh as part of the 'Playing for Scotland: The Making of Modern Sport' exhibit. Given the other wonderful sporting paintings on show in the gallery, the small Doyle painting may not at first be obvious, as it is within a cabinet, behind glass. I was on my hands and knees to study it! It is described as 'Curling Match on Duddingston Loch', although the date that it was painted seems not to be known.

I've mentioned before, see here, that this image was used on a Christmas card produced by the National Trust for Scotland some years ago. However, if you compare the image above with that on the card, you will find that the card image has been reversed!

Charles Doyle liked to paint fairies, and, indeed, one can find this theme in other curling sketches. In a post on the first year of this Curling History blog back in 2008, David wrote about 'Curling Spirits', see here, and included two of these sketches.

David also credited a sketch of curlers falling through the ice to Charles Doyle, see here. I do not know the provenance of this last work. However, its existence makes me wonder if indeed there are other curling sketches by Charles Altamont Doyle awaiting discovery!

Photographs of the Doyle paintings in situ are by Bob, on various visits to Edinburgh in the past months. Apologies for the reflections on some of these. The dust jacket image from David's book has been scanned. The larger version of this image can be found in The Roaring Game: Memories of Scottish Curling, written by David in 1985, and also scanned.
Posted by Bob Cowan at 15:44