The Bishop of Orkney 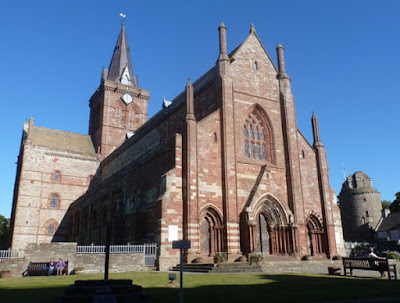 Construction of the St Magnus Cathedral in Kirkwall, Orkney, began in 1137. The photo above is by Chris Downer and was taken in 2011. The history of the cathedral can be found here. The link to the sport of curling is that, in 1638, the Bishop of Orkney was accused of being a curler on the Sabbath! Here's the story.

The source is private papers of Robert Baillie (here), a minister in Kilwinning who attended the General Assembly of the Church of Scotland, held in Glasgow in 1638. In a letter to William Spang, a Presbyterian minister in the Netherlands whom he addresses as 'Cousin', he details through 58 pages the 'History of the General Assembly in Glasgow in 1638'. He writes, "On Tuesday the 11th December was our eighteenth session. Orkney's process came first before us. He was a curler on the ice on the Sabbath day; a setter of tacks to his sons and good sons, to the prejudice of the church; he oversaw adultery, slighted charming, neglected preaching, and doing any good there; held portions of ministers stipends for building his cathedral." ('Tacks' are 'leases', and this accusation implies that he was corruptly favouring his family.)

So, what was happening in Scotland in 1638? I have a basic grounding in Scottish history, but I am no historian. However, here is my simplistic view of what was going on at this time. In 1603, James VI of Scotland inherited the English throne, the Union of the Crowns, see here. James died in 1625 and was succeeded by Charles I. Charles's attempt to make the Church of Scotland more like the Church of England was met with resistance. For example, when the dean of St Giles Cathedral attempted in 1637 to read from the new Book of Common Prayer for the first time, a woman called Jenny Geddes threw the stool she was sitting on at him and a riot broke out. The protests eventually led to the signing of the National Covenant. In 1638, the first free General Assembly of the Church of Scotland for 36 years was held in Glasgow. The Assembly ignored the attempts of the King’s commissioner to dissolve it. It found the Book of Common Prayer to be unlawful.

The details of the Assembly, the events leading up to it, and what happened thereafter, are all documented in detail by David Stevenson in his book The Scottish Revolution 1637-1644: The Triumph of the Covenanters, published in 1973. Between December 7 and December 13, 1638, all fourteen of Scotland's archbishops and bishops were deposed. Eight were excommunicated, the rest suspended from acting as ministers 'until they submitted to the Assembly and repented', according to Stevenson. The Bishop of Orkney was one of those suspended.

Who was he? And had he really played curling on a Sunday? His name was George Graeme, and we know a lot about him thanks to the family research done by Louisa Graeme and published in 1903 in Or and Sable: a book of the Graemes and Grahams. Louisa devotes a whole chapter on George Graeme who became the Bishop of Orkney, our 'Sunday curler'. He was born around 1565, the younger son of the Laird of Inchbrackie. George attended St Andrews University, and Louisa suggests, "We may be sure the scholar played too; frequent games of golf must have been won and lost on the breezy dunes of St Andrews." So, did his love of sport continue?

By 1590, George was a minister in the Parish of Clunie. He married in 1592, having fallen in love with Marion Crichtoun (Crichton). But her mother and step-father apparently disapproved of the match. George's wife-to-be had to be 'rescued' by George's brother and friends who turned up at Ardoch House on the night of June 29, 1592, with forty fully armed horsemen, and forced their way inside. Marion was spirited off. It is the stuff of a romantic novel! George himself wasn't present on the raid. As a minister, it would not really have been appropriate to his position to have taken part in such an adventure! But he did marry Marion.

In 1595, the Reverend George Graeme was minister at Auchtergarven, then in 1599, he became minister at Scone. He was appointed to the Bishopric of Dunblane in 1606, then in 1615 he moved with his wife and now large family to Kirkwall in the Orkney Isles, on being appointed Bishop of Orkney.

In 1617, he made a return visit to Scone, staying temporarily with Sir David Murray, formerly the King's cupbearer. His wife Marion had not come south with him on this occasion, and his biographer, Louisa Graeme writes, "She was somewhat needed by her lord and it might have been better for him had her gentle counsels been at hand to prevail; for then we think that the public records would have been free of the Bishop's name, but they bear testimony that the jovial nature of the long months of exile and official cares is lured away by the pleasure of mingling with old friends, and he is cited for curling on the ice on Sunday, a grave offence in any minor person, but amounting almost to be a crime in one of his rank and age, and so the record of the offence is left."

So, George Graeme, in his early 50s, had been seen curling somewhere around Scone in 1617. This is significant, as we know from the references in The Muses Threnodie (see here) that it was in the neighbourhood of the nearby town of Perth that curling was taking place in the late sixteenth and early seventeenth centuries. It all makes sense, and disproves any suggestion that the Bishop had been curling in the Orkney Isles.

George Graeme's love of curling, which apparently led to him being seen to play on a Sunday in 1617, would come back to haunt him twenty years later!

What were the 'public records' to which Louisa Graeme refers, that were kept of the Bishop's Sunday curling? Whatever these were are no longer known about, and Robert Baillie's mention of the curling in 1638 is the only record that remains.

Louisa documents in some detail the Bishop's life with his own children and extended family. She mentions various activities which took him around the country.

More details of George Graeme's time as the Bishop of Orkney can be found in History of the Church in Orkney, 1558-1662 by the Rev J B Craven, published in 1897. Chapters 15-23 are all about George Graeme. As well as church duties, he held courts and enforced order. There is nothing therein, that I can see, to suggest that the Bishop did not carry out his duties appropriately and diligently. Craven does describe him as 'a shrewd man of business', buying up land and erecting manor houses thereon.

George's wife Marion died in 1633, and at that time he would have been aware that his own future, and that of his position as Bishop, was somewhat uncertain. 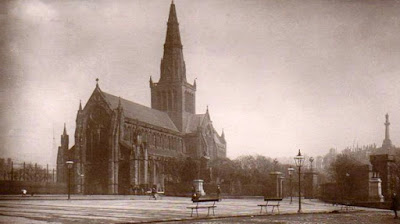 This is Glasgow Cathedral, where the 1638 General Assembly was held. By then in his seventies, George Graeme did not travel to Glasgow for the General Assembly, his son Patrick appearing for him. His 'trial' saw him accused, not just of curling on the ice on the Sabbath, but also of neglecting his preaching, and other charges as Robert Baillie notes. By submitting, essentially by pleading guilty, the charges brought against the Bishop were never openly challenged. It is interesting that one of his accusers was David Watsone who had been earlier the Bishop's servitor, and through the Bishop's patronage had been elevated to be vicar at St Olaf's kirk. As J B Craven puts it, Watsone "showed a poor return in gratitude for the kindness shown him by his patron."

Compared with other bishops who were excommunicated, George was leniently treated. Had he been excommunicated he would have lost all civil rights and his personal estate. As it was, George lost his ecclesiastical status and what remained of his life would be in much altered circumstances. He probably died in 1647, perhaps in Edinburgh, although the location of his grave seems not to be known.

From a curling history perspective, that the accusation that the Bishop had been 'curling on the ice' was made openly at the Glasgow Assembly suggests that the sport was by no means unknown in Scotland in 1638, and that it was a recreation, and as such, should not have been indulged in on a Sunday. Robert Baillie lists the curling first of all the accusations brought against the Bishop, and I found that significant. However, Baillie's words remain the only contemporary mention of the Bishop's misdemeanour and, as I've mentioned above, it would be interesting to know where Louisa obtained the 1617 information in her research.

After the Glasgow Assembly, the reaction in Scotland against King Charles's attempts to reform the Scottish Church was to lead to armed conflict, the so-called 'Bishops' Wars' of 1639 and 1640, see here.

Postcript: Louisa's suggestion is that the curling that the Bishop of Orkney was accused of took place near Scone, in Perthshire, and not in Orkney. In any case, I have found no evidence that curling was ever practised anywhere on the Orkney Isles, although there is a suggestion that material for curling stones was at one time collected from Copinsha, a small island to the east of the Orkney mainland. This, to me, seems somewhat far-fetched, but remains to be further investigated. It was well into the nineteenth century when, further north in the Shetland Isles, the Ultima Thule curling club was established in 1875. Photographic evidence of play near Lerwick in the 1880s can be found in the Shetland Museum and Archives, for example here.

The photo of St Magnus Cathedral is © Copyright Chris Downer and licensed for reuse under this Creative Commons Licence. The image of Glasgow Cathedral is from an old postcard c1900. 'Robert Baillie's Letters and Journal', printed for William Creech and William Gray, 1775, was consulted in the Special Collections, National Library of Scotland, Edinburgh. David Stevenson's book 'The Scottish Revolution 1637-1644: The Triumph of the Covenanters', published in 1973 by David and Charles, Newton Abbot, was also read in the National Library of Scotland. 'Or and Sable: a book of the Graemes and Grahams' by Louisa G Graeme was published by William Brown, Edinburgh, and is available in the National Library of Scotland. It has been privately digitised and the chapter about George Graeme can be found online here. 'History of the Church in Orkney, 1558-1662, Bishops Bothwell, Law and Graeme' is the third volume of Orcadian Church History by the Rev J B Craven, and published in 1897 by William Peace and Son, Kirkwall. This book is also held by the National Library in Edinburgh. My thanks to the always helpful staff at the library.
Posted by Bob Cowan at 14:34