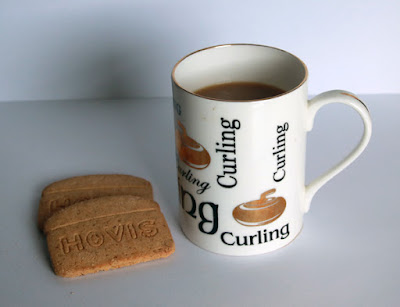 It's that time of the season when the curling enthusiast spends far too much time engrossed in watching major curling events in front of the television, tablet or computer screen. Sustenance is needed of course, and what can be better than supping a coffee from your favourite curling mug whilst watching the play!

I have a few curling mugs collected over the years, and as the Curling History blog hasn't had any articles with a 'collecting' theme for a while, here are a few thoughts on 'curling mugs'.

The one above, which I like as it is made of fine porcelain, and not too large, has 'McMillan Hotels' on the base. 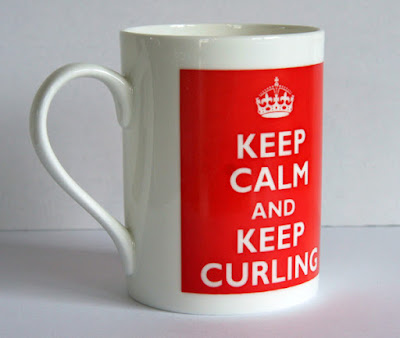 These days of course you can find mugs with all sorts of slogans on the sides. Here's just one. Other examples are 'Keep calm and love curling', 'I'd rather be curling', 'I love curling', 'Education is important, but curling is importanter', 'Beware, crazy curling lady', 'Man of the match', 'Born for curling: Forced to work', 'Curling beats fun', 'Hurry Hard', 'Live, love, curl', '(Anyname) The Queen of Curling', 'I throw rocks at houses', 'Live to curl', 'Curling rocks', 'I might look like I'm working, but in my head I'm curling', 'If you want me to listen to you, talk about curling', 'It's a curling thing, you wouldn't understand', 'Not everyone likes curling, not everyone matters', 'Curling King', 'I love my wife more than curling ... and yes, she bought me this mug', 'To curling, or not to curling. What a stupid question', 'CURLING: It really is rock it science', and 'Blondes have more fun on fast ice'!

Any photograph, image, pictogram or cartoon can be put onto a mug. There are many examples out there with a curling theme. You can even purchase mugs with photos of the GB Olympic medallists from Sochi. 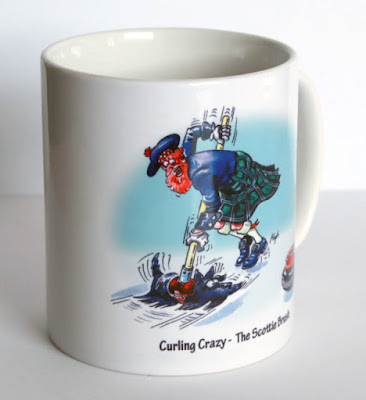 Here's an example of a recent mug with a cartoon image. I feel it falls into a 'not politically correct' category, particularly if you are an animal lover. 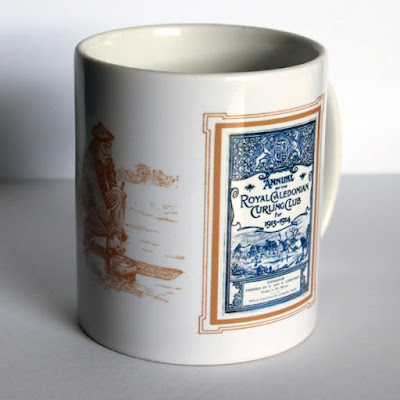 I couldn't resist adding this one to my collection, where someone had the idea of reproducing the cover of an old Royal Club Annual, and one of the images found therein, onto the side of the mug. 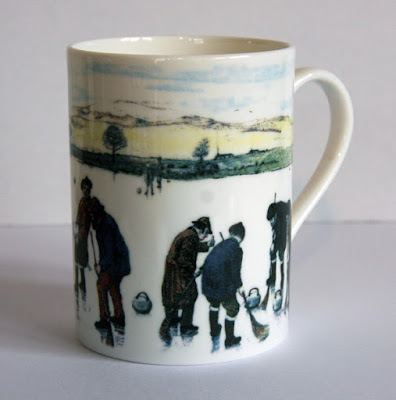 But on a more serious theme, some mugs are older, and these are for the real collector! I do like this one with the outdoor curling scene. There's no indication on the mug itself when or where it was made. It would be nice to know. 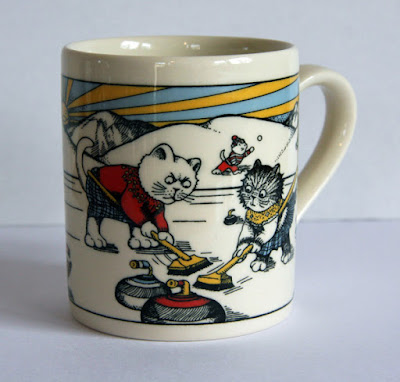 Here's another favourite. The design is by Aileen Paterson (see here) for McLaggan Smith Mugs Ltd, who are still in business in Jamestown, Alexandria, Scotland, see here. I believe this to be quite old - from the 1980s - but do not know exactly when it was produced. 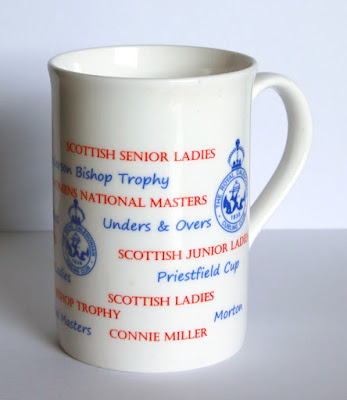 This mug was commissioned to be sold as a fund raiser for the Ladies Branch of the Royal Caledonian Curling Club. 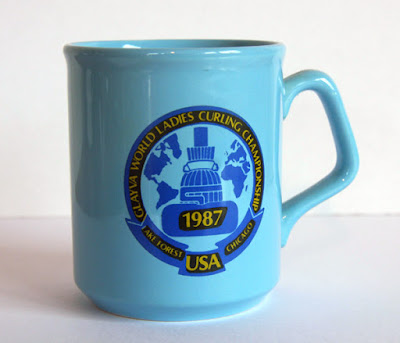 Here's an example of an 'event mug', to be sold as a souvenir at a curling championship, in this case the World Women's Championship in Lake Forest, Chicago, in 1987. I can see that gathering together a collection of 'curling event mugs' would make an interesting challenge. Here are a few more: 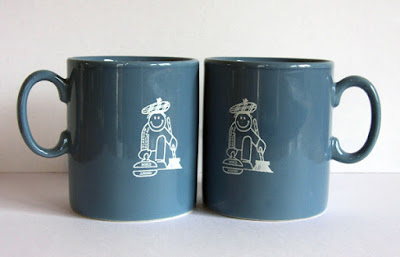 This pair of mugs are from the World Juniors in Glasgow in 1991. 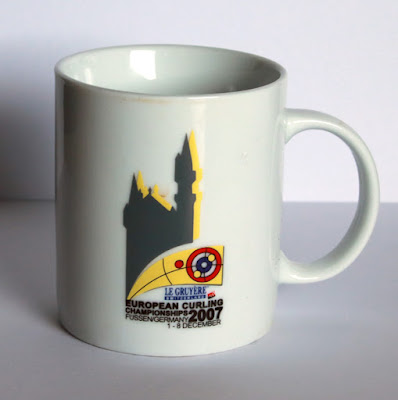 When you bought a coffee at the Le Gruyere European Championships in Fussen, Germany, in 2007, it was served in a real mug like this one, which you got to keep! 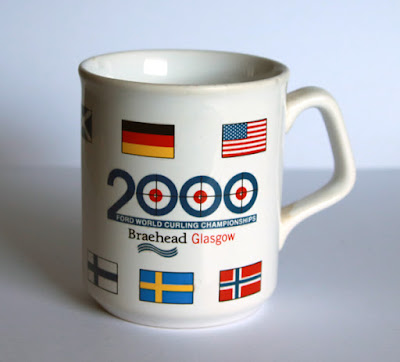 From the Ford World Curling Championship in Braehead in 2000. This is one side of the mug ... 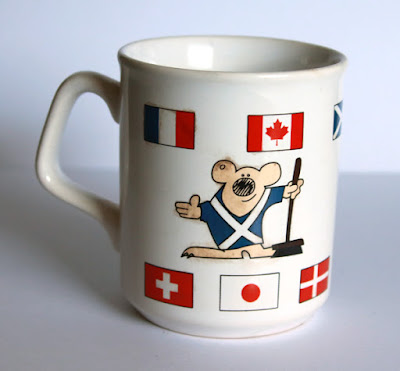 ... and this is the other, showing one of the late Rod McLeod's cartoon images. 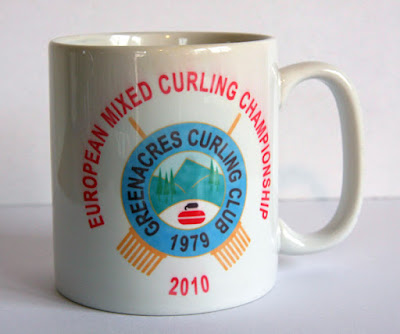 A rarity this one. From the European Mixed Seniors event at Greenacres in 2010. 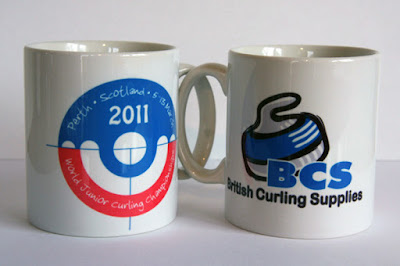 Advertising on one side, the event logo on the other. From the World Juniors at Perth, Scotland, in 2011. 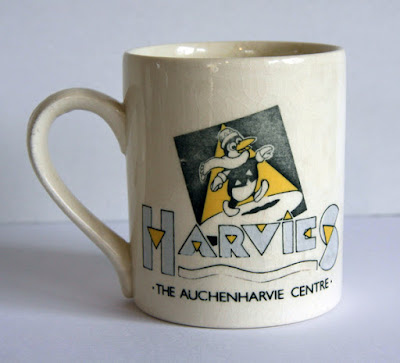 Not obviously connected with curling, but Harvies, aka the Auchenharvie Ice Rink in Stevenston, North Ayrshire, has been home to curling on certain days each week since 1990. I don't have any mugs identifying specific curling clubs in my collection, but I'm sure there must be some out there! 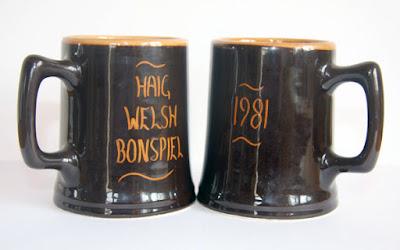 When does a coffee mug become a tankard? Souvenir mugs from the Welsh Bonspiel, 1981. 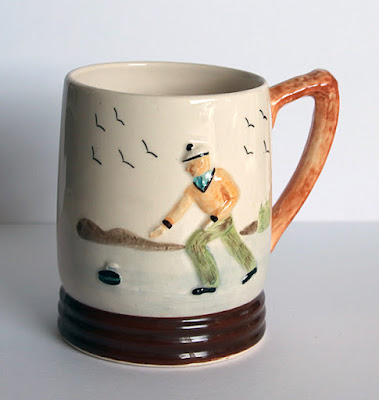 And here's another that could also serve as a small tankard. This from the Keele Street Pottery Co Ltd, England, see here.  The company closed in the late 1950s, so the mug must date from before then. Hand painted.

Not included here are china teacups and glass tankards - these for another time.

If you know of other old curling mugs, not illustrated above, do please send photos and these can be added below. Email address can be found in the sidebar.

Many of the mugs illustrated above are in the care of Christine and Hugh Stewart. Thanks to Hugh for photographing these. Other pics are by Bob. 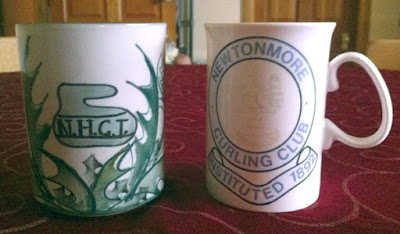 Jim Brown has been in touch via Facebook with a photo of two more. On the left is a North Highland Curling Trust mug made by Tain Pottery. The one on the right is from the Newtonmore Curling Club's centenary bonspiel at Aviemore in 1992. Thanks Jim. 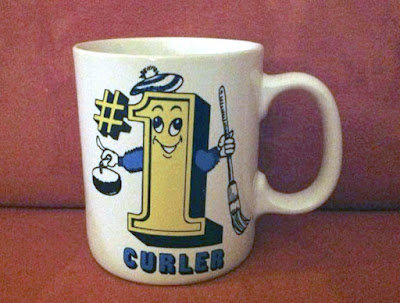 Fiona Simpson offers up this one, but says, " ... not sure where it came from!" Thanks Fiona. 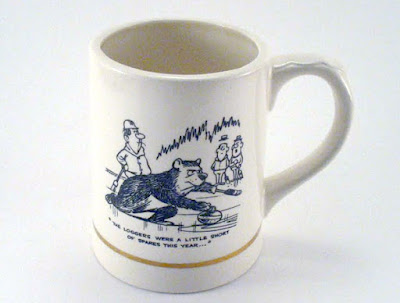 Alice Mansell sends this one, with a cartoon image. A bear is throwing the stone and the caption reads, "The loggers were a little short of spares this year!" Love it! Thanks Alice. 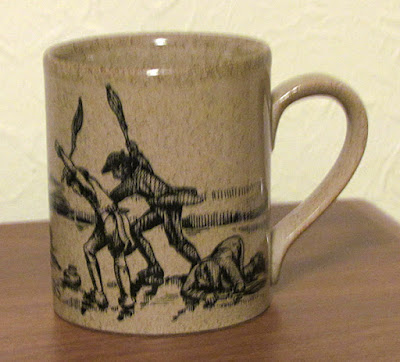 Ian Mackin offers this one. He says, "It was purchased at Dean Castle gift shop in Kilmarnock. It was by McLaggan Smith, Jamestown. I have used it more years than I care to remember. It is a print of Sir George Harvey’s 'The Curlers'." Thanks Ian.
Posted by Bob Cowan at 10:10