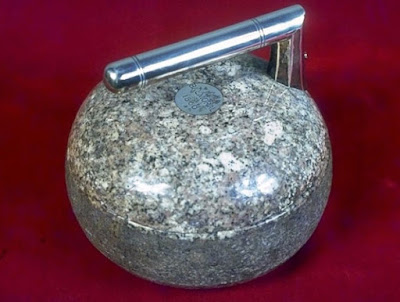 Prince Albert died in December 1861, just 42 years old. There's no doubt that his marriage to Queen Victoria was a loving one. I was thrilled to discover recently that Queen Victoria had given him a gift of an inkstand, in the form of a curling stone, in 1860, not long before his death. That's it above, reproduced from its page in the Royal Collection online here. It is an unusual item, perhaps unique and no doubt specially made. It's described as, "An inkwell of grey and pink granite, in the form of a curling stone with a silver handle and silver plate engraved with date; upper section swivels to reveal inkwell. Provenance: Given to the Prince Consort by Queen Victoria in 1860."

Other than the date of the gift, and the mention of Balmoral on the silver plate, there's nothing to indicate who made it, or the reason for the gift being made at the time. Apparently it's currently in Prince Consort's Dressing Room and Writing Room, in Osborne House on the Isle of Wight.

Albert had been Patron of the Royal Caledonian Curling Club since 1842, see here. Queen Victoria's gift shows that the sport was not something that had been forgotten about, and with their connections to Balmoral, it seems to provide just another reminder of their fondness for all things Scottish.

The Annual Meeting of the Representative Committee of the Royal Caledonian Curling Club, held within the Trades Hall, Glasgow, on Friday, July 25, 1862, was the first formal meeting of the Club since their Patron's death. James Ogilvy Dalgleish moved that "before proceeding to any business, the Meeting enter upon the Minutes, the Royal Club's most respectful and deep sympathy with Her Most Gracious Majesty, the Queen, on the very sad bereavement she has suffered by the death of His Royal Highness, the Prince Consort, and the deep sense of the great loss which the Royal Club has sustained by the death of its Royal Patron." This motion was unanimously and 'very cordially' agreed to.

A reply was received from Colonel Baddulph, "Osborne, July 21, 1862. My dear Lord, I am commanded to acquaint you, and to request you to signify to the Members of the Royal Caledonian Curling Club, that HRH the Prince of Wales will with great pleasure accept the office of Patron, according to the desire of the Members, as expressed in your letter."

Needless to say, all this was warmly accepted by the representative members present on July 25.

A further motion was made, "that the Club present His Royal Highness the Prince of Wales with a pair of Curling Stones, and that it should be remitted to the Secretary, with full power to provide and get the same presented to His Royal Highness, the Patron, in such way and manner as the Secretary shall ascertain to be most appropriate."

In 2009, David Smith wrote about the stones that were presented to the new Patron, see here.

The Scotsman of February 7, 1863, had the following article:

"The Prince of Wales and the Royal Caledonian Curling Club. At the Annual Meeting of the Representative Committee of the R C Curling Club, held in Glasgow last July, it was announced that His Royal Highness the Prince of Wales had signified, through the Earl of Mansfield, his acceptance of the office of Patron of the Club, formerly held by his illustrious and lamented father the Prince-Consort. At the same meeting it was resolved to present His Royal Highness with a pair of curling stones, and it was remitted to the Secretary, Mr Cassels, to take steps accordingly. The stones will be forwarded in a few days, and are at present lying at the shop of Messrs Mackay, Cunningham, and Co, goldsmiths to the Queen, Princes’ Street. They are made of green serpentine, found near Crieff, Perthshire, and generally known to curlers by the name of Muthill stone. The handles, the wood of which is of oak from Linlithgow Palace, are richly mounted in silver. The plates which screw on to the stones are elaborately chased with thistles, forming shields in the centres which bear the following inscription, 'Presented by the Royal Caledonian Curling Club to HRH the Prince of Wales, Patron, 1863'. The handles are wreathed with thistles, engraved, and the mountings on each end of the wooden part have a wreath of oak-leaves and acorns executed in the same style. They have been beautifully designed and executed by Mackay, Cunningham, and Co." 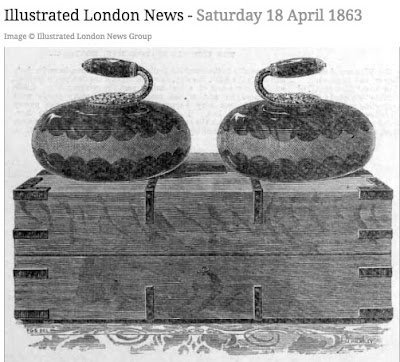 This is the image of the Prince of Wales's stones which appeared in the Illustrated London News on April 18, 1863. Comparing them to the stones that were presented to his father, one can see that curling stone design had moved on apace in just twenty years. David Smith discussed what they might have cost here. David found them at Balmoral. I assume that is where they are still.

In January 1876, it was widely reported that Queen Victoria had ordered that curling should not be played on the estate at Balmoral. It is rather odd to read the following in newspapers under the byline of an anonymous 'correspondent', "Royal Prohibition. The Balmoral Curling Club which only played its maiden game last winter, has cased to exist, orders having been sent to all the members of the club on the Royal estates to discontinue the game. Her Majesty is understood to have said that she did not see much amusement in the game of curling, but that she was afraid it tended to encourage a love for the national liquor."

Of course, the press loved this and the gist of this article was reported in papers throughout the country, and you can find it in the pages of the Pall Mall Gazette (above), the Bury and Norwich Post, the Cambridge Independent, the Western Morning News, the Lancaster Gazette, the Berkshire Chronicle and many others.

Not all saw the story to be true. The Inverness Courier's Editor wrote, somewhat ironically, "The London papers are much exercised with a paragraph to the effect that her Majesty has forbidden curling at Balmoral, because the 'roaring game' is devoid of amusement, and conduces to drinking. Surely the story is a canard. If ever there was game that truly delighted people with excitement, and kindled the true glow of pleasure, it is certainly curling. As for the drinking part, I suppose the Balmoral folks, like Scotch folks generally, can get on with this even without the curling. I am inclined to think, indeed, that frozen up with nothing to do, the whisky has better chance in the farmhouse or bothy than on the rink."

"Surely the story is a canard!" In other words, the story might well be 'fake news', as we might say these days.

Some English papers also thought the story to be false. The Sheffield Daily Telegraph had doubts and we can find these in the edition of January 25, "Surely some enemy hath said this. The Queen cannot have ordered everybody on her Highland estates to cease from curling! It would be so ungracious, so churlish, so dour an act that one refuses to credit the rumour. Curling—the sport upon which Scotchmen are keenest! As well put down the beef and greens which are the traditional fare of curlers. What! Put down that honest, manly game - involving no gambling, no cheating, no sharp practices, no cruelty to animals - a healthy, invigorating, innocent amusement, which unites all classes, and has a zest for all. Why, the Presbyterian ministers enjoy the game almost a man, and see only good in it. You remember the story of the worthy and Rev Curler who, before dismissing his parishioners with the blessing, thus delivered himself from the pulpit, 'My brethren, there is no more harm in saying it than thinking it. If the frost holds, I'll be on the ice tomorrow morning at nine'. And then for the Queen to prohibit it to her tenants and servants because she did not see much amusement in the game and feared that it 'encouraged a love for malt liquor'! What hearty out-door game may not be subjected to the same dreadful impeachment? But no! The story is not credible."

What a wonderful supportive description of our sport of curling to appear in this English newspaper!

In February 1876, damage limitation was in place. Many newspapers reprinted the text of a letter sent by Lord Kinnaird to Sir John Ogilvy, "CURLING AT BALMORAL, Lord Kinnard has sent the following letter to Sir John Ogilvy, 'My dear Ogilvy,—You and all curlers will, I am sure, be glad to hear that the statement in the public papers regarding her Majesty's opinion of curling is entirely without foundation. I felt sure from the first that this was the case, but had not the authority till now to authenticate the statement,— Yours truly, KINNAIRD."

Lord Kinnaird was Lord Lieutenant of Perthshire from 1866 to 1878. Sir John Ogilvy had been a Scottish Liberal Party politician in Dundee. He was Patron of the Dundee Curling Club in 1876. 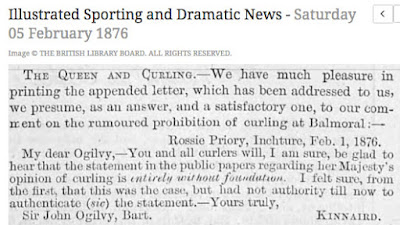 This simple rebuttal of the story was apparently sent directly to various newspapers, as the above shows.

There was no mention of the issue in the Royal Caledonian Curling Club Annual for 1876-77.

However, if one subscribes to the proverb 'no smoke without fire', perhaps there was something about the establishment of a local curling club that had upset the Queen, given that she mourned Albert's loss for many years, especially at Balmoral. I can find no record of curling at Balmoral until after Queen Victoria's death. It was in 1904 when the Balmoral Curling Club became affiliated to the Royal Club, having been instituted in the same year, with HM the King (Edward VII), as its Patron. 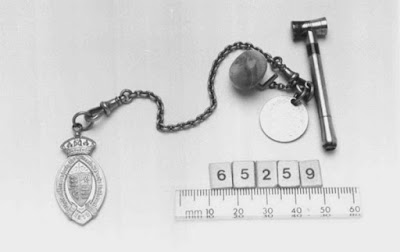 I have one more image which links Queen Victoria to our sport of curling. This again I have reproduced from the Royal Collection online, here. It is described as 'A gold chain with charms in the form of a croquet mallet, agate curling stone, arabic coin and medallion commemorating the recovery of the Prince of Wales." Its provenance is given as 'Chain always worn by Queen Victoria', and is dated c1872.

The Prince of Wales became very ill with an infectious disease in 1872, when he was 31. He fortunately survived, or the country would have lost its next King, and the Royal Caledonian Curling Club its Patron. But he did recover. I just think it is very touching that Queen Victoria wore a chain with a small reminder of the sport of curling from that date on!

'How the Royal Caledonian Curling Club got its name' is here. Even more Royal connections to come.

Images are as credited in the text. The British Newspaper Archive continues to be a wonderful research source.
Posted by Bob Cowan at 08:43