I have written recently about how the Royal Caledonian Curling Club gained its Royal Patronage here, and about other Royal connections during Victorian times, here.

One of the most surprising locations where curling was played south of the border is Buckingham Palace. Yes, the Historical Curling Places website has tantalising evidence from 1895 that the Prince of Wales played curling on the pond at the palace, see here. This is certainly possible as the winter of 1895 was a severe one. It would be great to find out more.

When Queen Victoria died in 1901, Edward VII succeeded to the throne. As Prince of Wales he had been the Royal Caledonian Curling Club's Patron since 1861, so it was a straightforward matter that he continue to hold that office when he became King. 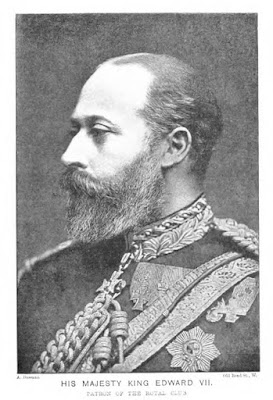 The Annual for 1901-02 noted that this was the first time 'that the Patron of the Royal Caledonian Curling Club has actually been found seated on the throne, and it has in these unique circumstances seemed appropriate to give a portrait of His Majesty as a frontispiece to the Annual'. That's the image, above.

The Royal Club's Annual each year simply noted that the Patron was 'HM the King', and one has to read further at times of succession to clarify which monarch is being referred to. In 1936, for example, Edward VIII was confirmed as Patron, even though he abdicated before the year ended.

George VI became the Club's next Patron. He died in 1952, and that's when Queen Elizabeth became our Patron.

This is the preface from the Royal Caledonian Curling Club Annual for 1952-53. This Annual contains the following letter to Lord John Hope, Royal Club President, from the Keeper of the Privy Purse, Ulich Alexander.

"Dear Sir,
I am commanded by The Queen to inform you that Her Majesty has been graciously pleased to grant Her Patronage to the Royal Caledonian Curling Club.
It will be in order for the words 'Patron—Her Majesty the Queen' to appear in future under the name of your Club on all correspondence.
Yours truly,
Ulich Alexander,
Keeper of the Privy Purse."

At the Annual General Meeting of the Royal Club each year, a short message from the Queen is usually read out, and all the members present stand for this. 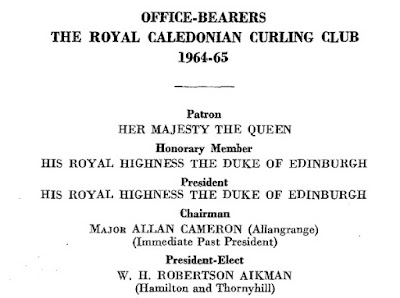 The Annual for 1963-64 records the background to it all in Major Cameron's speech at the AGM, "Now, we come to the election of the President-Elect. When Gilbert (McClung) and I were discussing this some time ago we felt that it would be your unanimous wish that we should ask His Royal Highness, The Duke of Edinburgh, if he would consider becoming our President. I wrote him a personal letter and he replied that he would be very pleased to become President in the year following my presidency. The Duke of Edinburgh, as you all know, is a great sportsman himself. He takes great interest in anything to do with sport. He is, as you know, President of the National Playing Fields Association. He has taken a great deal of interest in the Olympic Games and the Empire Games, and I do not think there is any shadow of doubt that he will show the same enthusiasm for curling as he has shown in all the other forms of sport that he is interested in. I hope we may see him partaking in the Grand Match. I gather that he is an Honorary Member of a Curling Club in Canada. As yet, his name does not appear in the Annual, and I hope that any club who considers that they have the highest priority for his membership will rake him in and get his 4/-! For myself, I am extremely honoured that Prince Philip should follow me as President and I have great pleasure in nominating him as President-Elect. (Loud Applause.)"

Falkirk Ice Rink was the venue for the Annual Meeting of the Royal Caledonian Curling Club on July 22, 1964. The Duke of Edinburgh piloted his own helicopter to the meeting, and was met by Major Allan Cameron, the outgoing President. 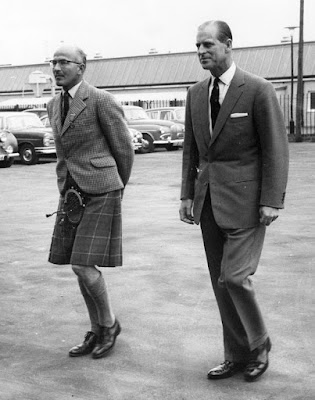 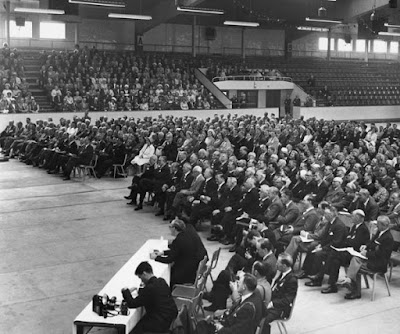 Some 1600 curlers, and members of the press, awaited Prince Philip inside the Falkirk Ice Rink.

And if you look very closely, amongst those on the main floor are four teenagers wearing dark coloured blazers. 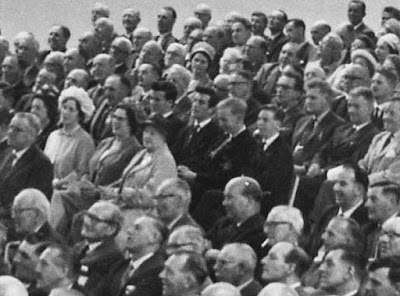 Yes, that's Bill Horton, David Horton, Robert Cowan and Martin Bryden in the middle of this pic. That season we had won the TB Murray Trophy, for young curlers of 25 years and under. Although the trophy had already been presented to us by Chuck Hay at Perth a couple of months earlier, we were invited to Falkirk to receive the trophy again from the hands of the Duke of Edinburgh. 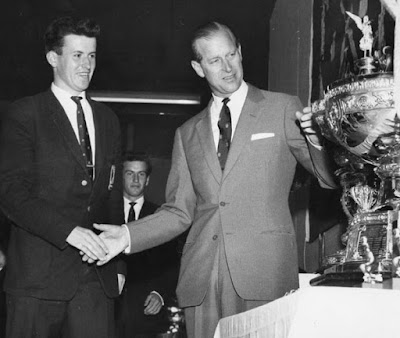 Here's Bill Horton (skip) on the platform with Prince Philip. His brother David is behind, and Martin and I are awaiting our turn out of sight! (Actually, the large TB Murray Trophy is obscured too, by the Grand Match Trophy, but it is there!)

It was the proudest day of my life, at just sixteen years old!

The Duke of Edinburgh's year as President was a real public relations coup for the Royal Club. As far as I know he never took to the ice, although he did say in his speech, "I don't see why there shouldn't be non-playing Presidents - and I suppose I could always do something about the non-playing part!"

At the lunch after the meeting, attended by the Council, Past-Presidents, and overseas personalities, Major Allan Cameron 'presented the Duke of Edinburgh with a beautiful pair of Kay's red hone stones, suitably inscribed'. I wonder where these are now?


Queen Elizabeth has twice been associated with Aberdeen's curling rinks. 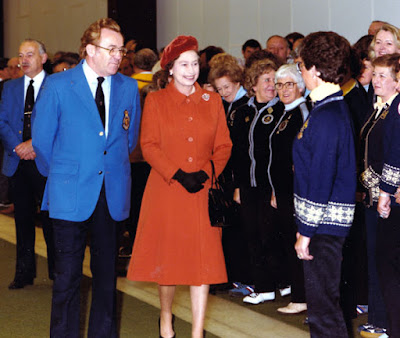 On October 18, 1983, this is HM Queen Elizabeth, accompanied by Dr Norman Cooper, Chairman of the Board, at the official opening of the new Aberdeen rink, at Stoneywood Road, Dyce. She is about to speak to Anne Parker, North East Province President, with members of Grampian Ladies CC behind. 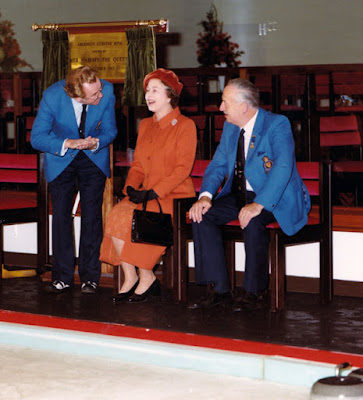 Her Majesty seems to be enjoying a joke with Norman Cooper and Philip Dawson, a Past-President of the Royal Caledonian Curling Club. 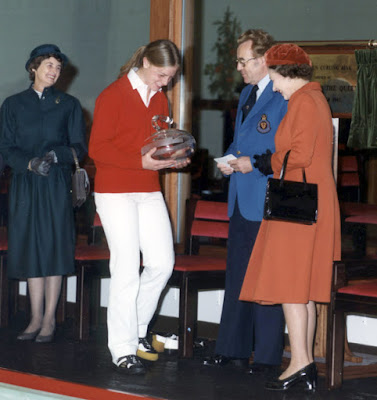 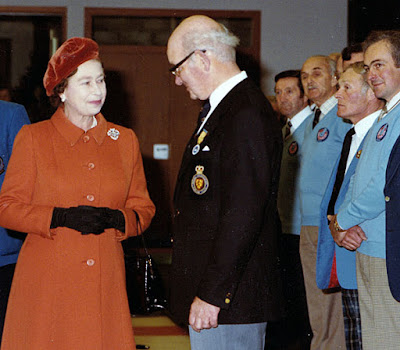 Her Majesty in conversation with Royal Club Past-President Alan Johnston.

Springing forward twenty-two years to 2005, Her Majesty was again back in Aberdeen, on October 4, visiting the new Curl Aberdeen! 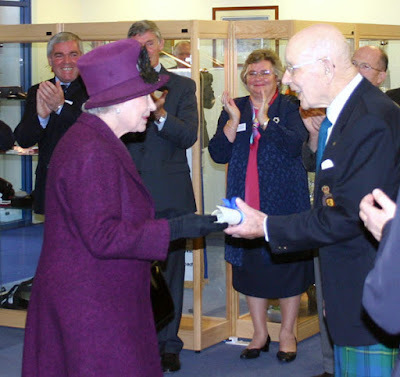 Here she is, again talking to Alan Johnston. She presented him with a certificate as an Honorary Member of the Royal Caledonian Curling Club. 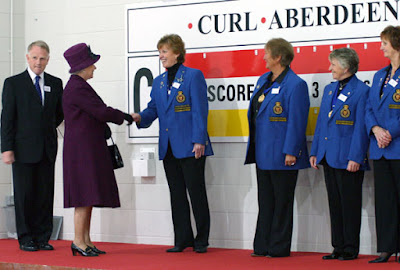 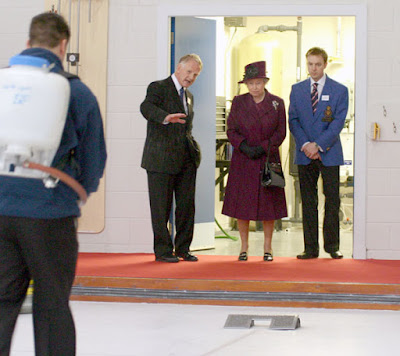 With rink manager Tom Brewster, Her Majesty received an explanation about pebbling from George! Graham Smith is doing the work.

Finally, here's another member of the Royal Family, at the Braehead Rink in 2005. 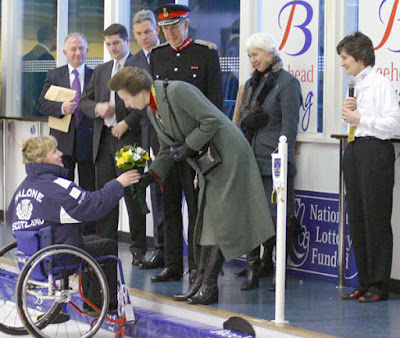 Angie Malone presents Anne, Princess Royal, with a posy of flowers when she visited the World Wheelchair Curling Championship at Braehead in January 2005. Kirsty Letton, the event chairman, is on the right.

Have I missed any other Royal connections?

ADDED LATER  Yes, I did indeed overlook another Royal connection. 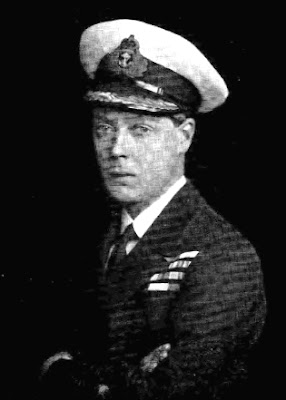 In 1925, King George V was the Patron of the Royal Caledonian Curling Club. His son, Edward, Prince of Wales, was proposed by Colonel Robertson Aikman, and unanimously elected Royal Caledonian Curling Club President at the Annual Meeting on July 29, 1925, held in the Lecture Room of St Margaret's Hall, Dunfermline. I cannot find any evidence which suggests that he took any interest in the affairs of the Club during his year in office. The photo above, by Vandyk, London, is the frontispiece of the 1925-26 Annual. Edward became King Edward VIII in 1936, before abdicating later that year, see here.

The image of Edward VII is from the 1901-02 Annual of the Royal Caledonian Curling Club. The photo of Princess Anne, and of the Queen at Curl Aberdeen are © Bob Cowan. Those from the opening of the Aberdeen Rink in Dyce were taken by Studio Morgan of Aberdeen for Robin Welsh. Those of the Duke of Edinburgh at Falkirk are by various news photographers, for Robin Welsh, Editor of the Scottish Curler, now in my archive.