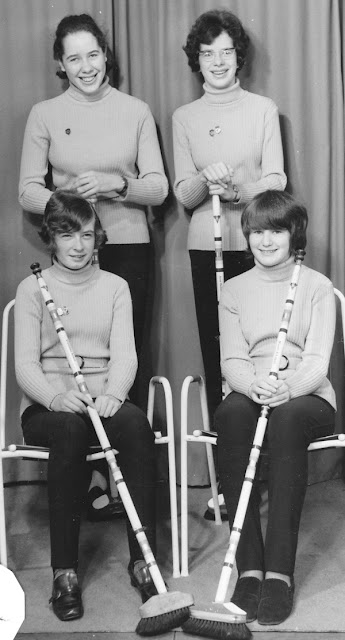 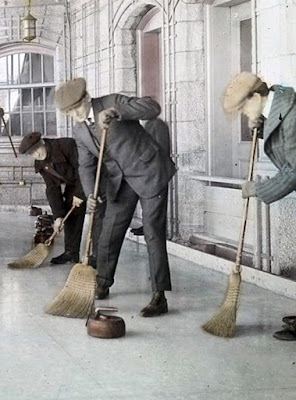 CIP-58. A rarity this! It's detail from a magic lantern slide which shows play with irons. Unfortunately no provenance came with the glass slide when I acquired it some years ago. Iron play was popular in Quebec Province up until the 1950s, but this image dates from well before this, perhaps even from the nineteenth century. (The slide measures 4x3in, and has a 'Canadian Pacific Railway' sticker on it. Presumably hand coloured.)

ADDED LATER: Alan Chalmers has suggested that this is within what is now the breakfast terrace at the Chateau Frontenac in Quebec City. He notes that there are a few pictures within the hotel of curling taking place inside the building. The hotels website has this, "In the late 19th century, William Van Horne, General Manager of Canadian Pacific (CP) Railway, began building the hotel as the ideal stopover for CP travellers." That explains why the slide has a Canadian Pacific Railway sticker attached to it. I've now found the very photograph online here, although it looks as if I have reversed the image when scanning the slide. 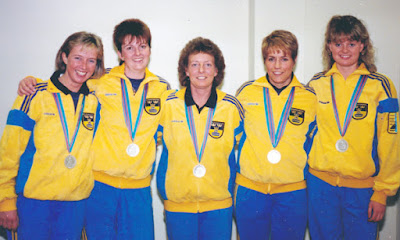 CIP-59. There's a Swedish ladies' Tour team in Scotland this week (end October 2018). In celebration of this, we go back to 1988. This is the squad which represented Sweden at the 1988 Olympic Games in Calgary, when curling was a demonstration sport. Eight countries took part. L-R: Elisabeth Högström (skip), Monika Jansson, Birgitta Sewik, Marie Henriksson, and Anette Norberg. They were beaten by Canada, (skipped by Linda Moore) in the final. Where did the GB women finish? (*answer below.) (6x4in print, photographer not stated.) 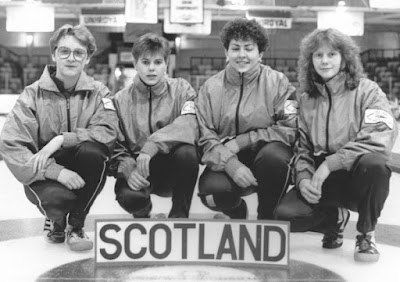 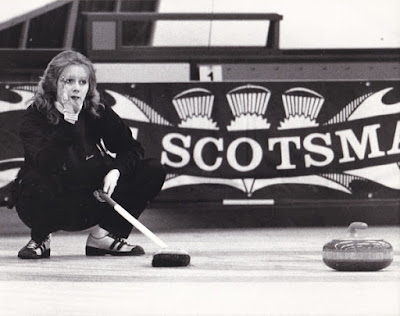 CIP-61. Susan McLean, now a Royal Caledonian Curling Club Board Member and Scottish Senior Champion! This pic is from the Henderson Bishop finals in Aberdeen in 1986. Susan was playing with Jane Sanderson, Mhairi Stephen and Julie Hepburn. The team reached the final against Kirsty Letton's side, but lost 11-6. The competition was sponsored at that time by the Scotsman newspaper and by Martini and Rossi Ltd. (8.5x6.5in, photographer not known.) 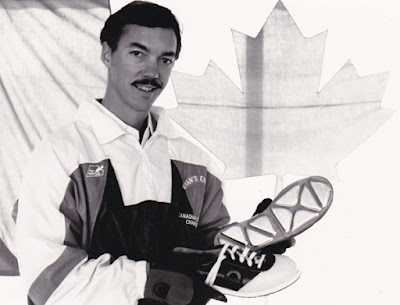 CIP-62. In 1989, Canada's Pat Ryan is photographed with 'his new invention' (as written on the back of the photo), a curling shoe with a metal slider. Double world champion skip, in 1989 his team were dubbed the '(Pat) Ryan Express'. But I liked him because of his interest in country music and that he penned the Brier Song, see here! (7x5in print, by Frieder Rosler.) 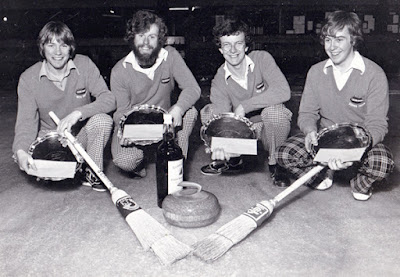 CIP-63. L-R: Keith Douglas, Ken Horton (skip), Willie Jamieson and Stephen Cullen, who gets extra points for his colourful trousers! The team had won the Famous Grouse Inverness Invitation in November 1978, stealing the last end against the Jock Dennis rink in the final. Jock's team was Bill Nicol, Danny MacLennan and Sandy Mackintosh, according to the report in the November 1978 Scottish Curler. I think the corn brooms are just for colour! (8.5x6.5 print by Blair Urquhart.)

Thanks to Alan Chalmers for help with CIP-58. Photos are as credited where the photographer is known. Check the archive (on the right) for previous Curling Image Project posts. * Trick question. There was no GB women's team at Calgary.
Posted by Bob Cowan at 08:20