Curlers like to collect things. Some examples which have appeared on the Curling History blog before, are here (spoons), here (mugs), and a two part article on curling lighters, here and here.

Within the large area of 'paper ephemera' one can collect 'trade cards' - for example cigarette cards, and the like. Collecting 'trading cards' is a different thing. A 'trading card' is a small card, usually made out of cardboard, which contains an image of a person, place or thing, and a short description of the picture, along with other text. Most will have heard of baseball cards, for example. There is a wide variation of different types of cards. Modern cards even go as far as to include swatches of game clothing (really!).

I have a small collection of curling 'trading cards'. 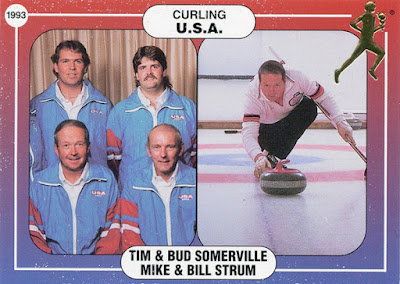 This is one of the earliest in my collection, showing the Bud Somerville team, and dates from 1992. 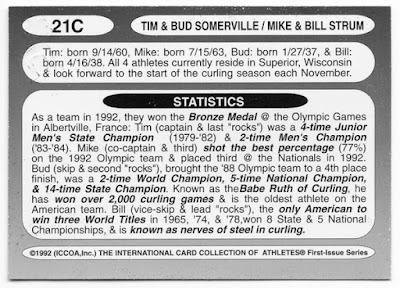 Here's the reverse of the card. It is Number 21 from the first-issue of the International Card Collection of Athletes set. Note that this card features the Somerville team that competed at the Albertville Olympics in 1992, when curling was a demonstration sport, not the great Somerville team, that oldies like me remember, which won the Scotch Cup in 1965. 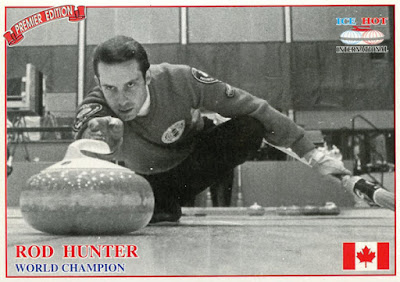 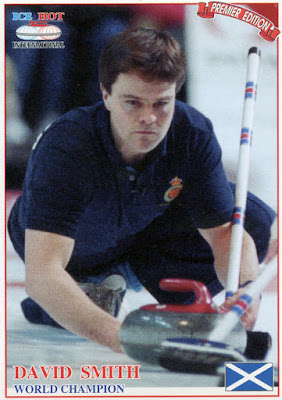 11. David Smith is the only Scottish curler to be featured among the 66 cards in the first set issued in 1993. 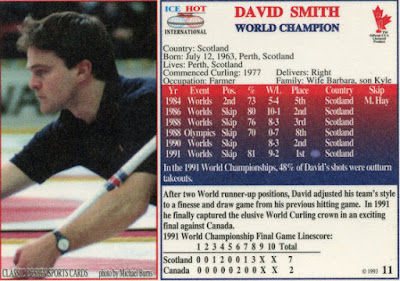 Here's the reverse of the card. I wonder what happened that David's playing percentage in 1990 has been omitted? I like the sentence, "In 1991 he finally captured the elusive World Curling crown in an exciting final against Canada." 'Exciting' is not the adjective that I would have used if just looking at the linescore. But it certainly was exciting for all Scots that were there in the stadium at Winnipeg, as I was! Lots of controversy too, but that's a story for another time. 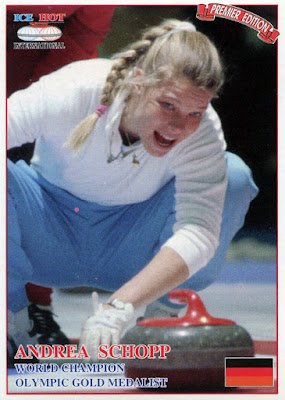 All of the 1993 Ice Hot International cards are illustrated in the Trading Card Database, here.

The above list does not appear to be ordered in any way, eg alphabetically, or by date, or even by 'importance'. It is Canada-centric of course, but does give an idea of what those putting the collection together thought that a 'Hall of Fame' might look in 1993. It must have provided a great source of argument at the time. Does it really reflect 'international' curling in 1993? Who's been missed out? There's no mention of the first World Women's Champions, skipped by Gaby Casanova, in 1979. And where's the great Bud Somerville, USA, on this list?

In 1994, a second set of 50 cards was produced, as an extension to the 1993 set. The omission of Bud Somerville is rectified in this second set. And two more Scottish curlers are represented. It is interesting to reflect that - in the minds of those putting these sets of trading cards together in 1993 and 1994 - only three Scottish curlers deserved mention. 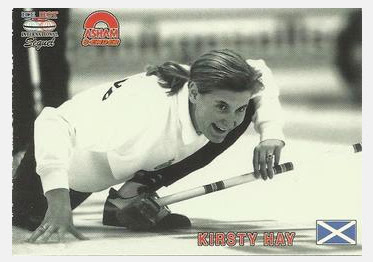 92. Here's the card featuring Kirsty Hay, Scotland. My goodness, that's a creepy looking expression on her face in this photo! 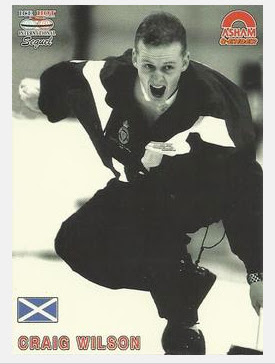 Eagle-eyed readers will have spotted that Glenn Howard and Pat Ryan appear in both sets. I wonder why. All of the cards in the 1994 Ice Hot International Sequel set are illustrated here. 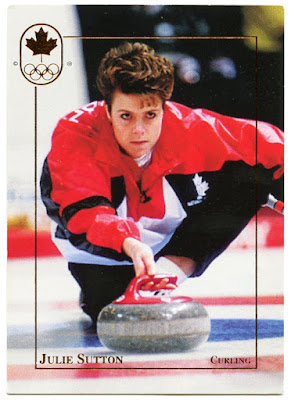 Here's an example. This card is one of a series of Canadian Winter Olympic Medal Winners, published in 1992. Julie with Jodie Sutton, Melissa Soligo and Karri Willms won the bronze medals in 1992 when curling was a demonstration sport at the Albertville Olympics, at the rink at Pralognan. The other members of the team are depicted on their own cards.

Cards from more recent years can be collected, see below. 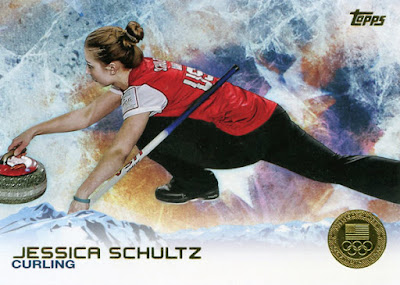 The Topps Company, Inc, manufactures chewing gum, sweets (candy), and collectibles. Topps is best known as a leading publisher of trading cards depicting various sports, such as that above of Jessica Schultz. The card with the metallic logo in the bottom right can be found in bronze silver and gold! It was published in 2014. Jessica was a member of Erika Brown's team at the 2014 Olympics, finishing bottom of the table. 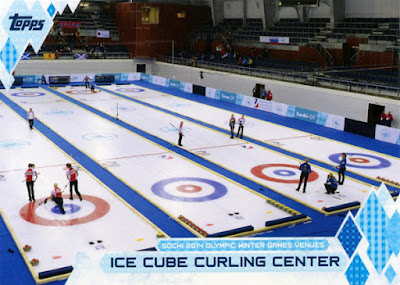 Here is another Topps card, depicting the Olympic curling venue at Sochi, 2014. 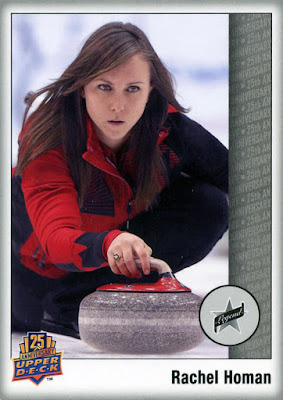 Upper Deck, whose headquarters are in California, is a well established publisher of trading cards, of high quality. This is one of a 25th Anniversary edition depicting curling 'legend' Rachel Homan, from 2014. It is indeed a high quality card.

The curling cards illustrated in this article are just examples of what is 'out there' and waiting to be collected. 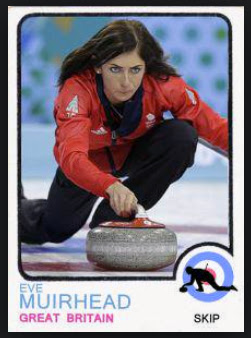 Finally, I should mention the writer of The Shlabotnik Report who came up with the idea of 'virtual' trading cards ('because someone had to do it'), see here. The above of Eve Muirhead is an example.

Images are of cards in the author's collection, other than those of Kirsty Hay and Craig Wilson which are screenshots from here, and that of Eve Muirhead's virtual card, from here.
Posted by Bob Cowan at 16:15

The Red Hot cards were created by Pierre Charette, who just happens to be one of the cards! I have a complete set of the original 65 cards and duplicates of most of them. It's amusing to look at photos of some who are still active like Glenn Howard.