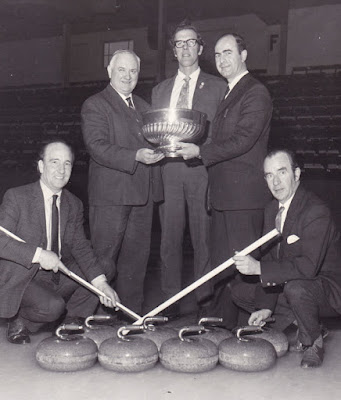 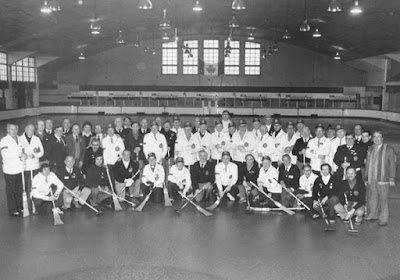 CIP-149. This is a group shot of visiting curlers at Crossmyloof, with their hosts. I haven't as yet been able to work out which tourists they are. Can anyone tell me? David Duncan is on the right, so that suggests the 1970s or early 1980s. The reproduction is really too small to be identifying other individuals, but I like the photo as it shows the extent of the seven-sheet curling rink at Crossmyloof, which holds fond memories for me, as that's where my curling career began! (9x7in print, photographer not stated.) 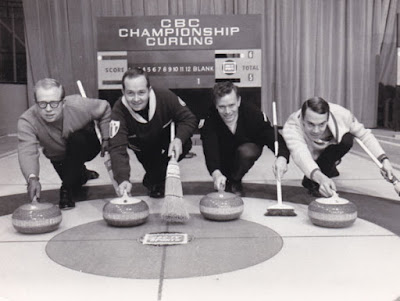 CIP-150. This is a promotional shot for the CBC Championship Curling event in Toronto in  December 1969. L-R: Ron Northcott (Canada), Bud Somerville (USA), Bill Muirhead (Scotland) and Christer Wessel (Sweden). These were four of the skips of teams that had played in the Air Canada Silver Broom at Perth earlier that year. Wessel had skipped and played lead for Sweden in 1969. His fourth player was Kjell Oscarius. This eight rink competition was 'videotaped' to produce a ten-week series of hour-long programmes for television in Canada. The event was won by Saskatoon's Merv Mann, who beat Somerville's team in the final. (8.5x6.5in print, CBC photo.) 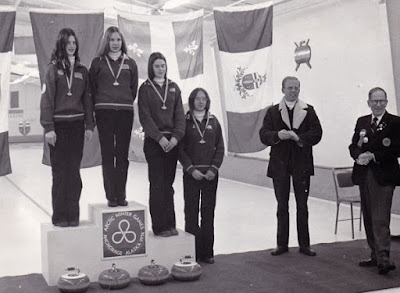 CIP-151. The third 'Arctic Winter Games' were held in Anchorage, Alaska, in 1974. The photo is of the Alaska Junior Girls who won gold in the curling competition. L-R: Jodi George (3rd), Theresa Gryder (skip), Lisa Baucher (2nd) and Donna Gryder (lead). Next to the podium, in the sheepskin jacket, is three times Canadian and World Champion skip Ron Northcott who presented the medals. On the right is Lt Col Roy Fisk, the 'Chief Referee', as he is described in the article in the April, 1974, Scottish Curler. The multi-sport competition is still held every two years, see here.  (7x5in print, photographer not known.) 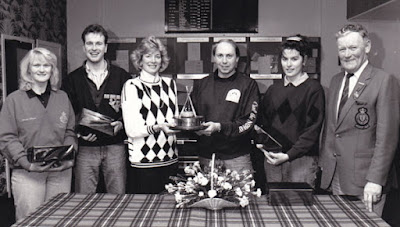 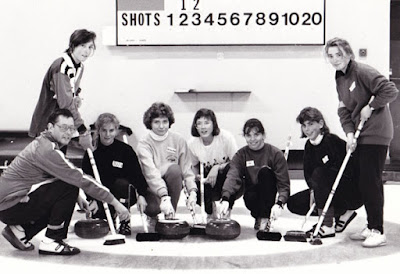 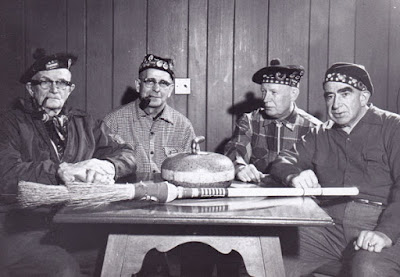 CIP-154. Here are the winners of the First Event at the Milwaukee TriScore Bonspiel sometime in the 1950s. The names are HT Ferguson (skip), Ralph E Welton, Dr Graham Fee and Alfred J Hudson, but not sure if it is a L-R. (7x5in print, Erwin F Nell, Wauwatosa, Wisconsin.)

Photographers are credited when they are known. Check the archive (on the right) for previous Curling Image Project posts.
Posted by Bob Cowan at 08:58