Peter Thomson, Baker, and the 'Curling: made in Scotland' Exhibition 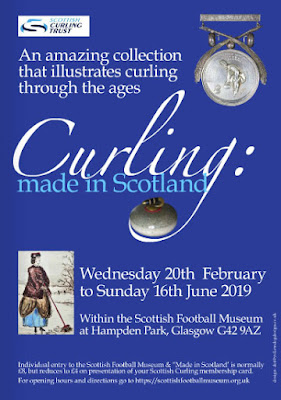 The curling history exhibition, 'Curling: made in Scotland', opened today (February 20, 2019) at Hampden Park, Glasgow. The Scottish Football Museum has an additional space for temporary exhibitions, and the curling exhibition will be held here until June 16.

The exhibition relies heavily on the David B Smith bequest to the Scottish Curling Trust. David died in 2015 and his huge collection of curling memorabilia has been in store in Stirling since then. David's brother, daughter and son, and their partners, were present for the opening. Also on display are treasures acquired by the Royal Caledonian Curling Club over the years, and also more recent acquisitions by the Scottish Curling Trust.

Do visit if you possibly can. Curling's history is very special. Scottish Curling's CEO, Bruce Crawford, challenged us all to pick our 'favourite' item on show. I knew what mine would be! It's this painting: 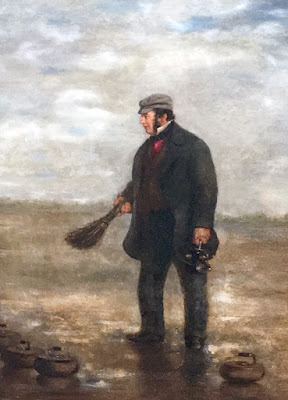 The exhibition has been almost a year in the planning. For me, one of the highlights has been the discovery of an oil painting which David had in his collection. That's it above. David's notes about this had been lost, and the Scottish Curling Trust's John Burnett, who has been heading up the team that's made the exhibition happen, asked if I knew anything about it. It shows a curler standing on the ice, with stones in the foreground, with a broom cowe under one arm. In his left hand he is carrying a pair of curling stone handles and bolts.

It turned out that, without initially realising the connection, I did know rather a lot about the painting, and especially the artist. David had got there before me of course, and he had described his purchase of the painting in an article in the Scottish Curler, back in April 1993, long before my association with the magazine.

David wrote that he had purchased the painting from a friend in Somerset, and that it had come from at auction in Stoke-on-Trent. He reflected on seeing the painting, "The picture was indeed dirty; and its frame was dirty and damaged, but oil paintings of curling and curlers are not so common that one can turn up one's nose. And so I bought it." David did not record how much he paid for it.

The painting is not signed, but after some research, David figured out the identity of the curler in the painting. He is Peter Thomson, an Airdrie baker, who was one of those taking part in the game depicted in the huge 'The Curlers at Rawyards' painting (see here), which dates from 1857, and that the artist was John Levack. 'The Curlers at Rawyards' hangs at the Summerlee Museum of Scottish Industrial Life at Coatbridge. David describes his painting as a 'spin off' from this big composite portrait, and that the artist had perhaps prepared for the large work by first sketching how each person would appear in his finished work. He wrote, "Sometimes the artist later worked up these sketches into individual portraits." There's no proof that this is the case, but it is a likely scenario to explain the origins of David's painting. 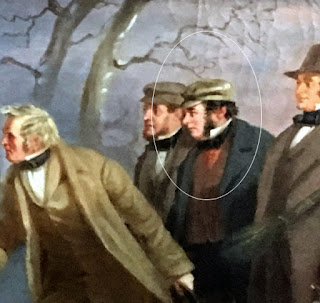 Here is a closeup of Peter Thomson from the large painting. Compare it with David's painting at the top of this article. There is absolutely no doubt that both depict the same person. That it is Peter Thomson relies on the accuracy of the little name plates that adorn the frame of the larger painting. If these are correctly positioned, and are accurate, then the curler depicted is indeed Peter Thomson.

David concluded his article by noting that he knew of one other individual portrait by John Levack, of Provost Rankin, and wrote, "Perhaps this article may bring others to light, and perhaps also some more information about the artist who immortalised those Airdrie curlers of 136 years ago." By coincidence, I was to be the one to provide more information!

Moving forward to 2016, I did not know about David's painting when I wrote about 'The Curlers at Rawyards', and its artist, in an article here. The story of John Levack is a sad one. He committed suicide, after, it should be said, having been jailed for beating up his wife. I wondered if she had survived, and what had happened to her. Some months after I published the article, I received an email from a descendant, and we began to correspond. Leslie Porter is Levack's great great granddaughter. Agnes, Levack's wife, did recover from her injuries, successfully supporting her family of five children as a seamstress for a theatrical company. Leslie is descended from the oldest of these, also called John, the artist's son, born before he and Agnes were married. John's daughter Catherine emigrated to Canada with her husband in 1927. They were Leslie's grandparents. Leslie was emailing me from St Catherines, Ontario, Canada. The Internet can be a wonderful thing! 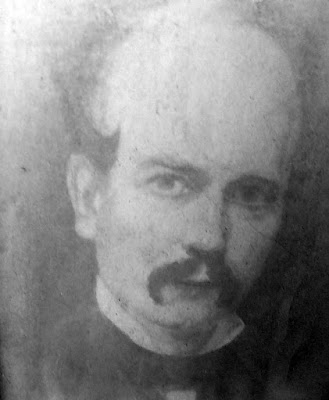 Leslie sent me this photo of John Levack, artist, from the family archive. It may well be the only recorded image of him. He died in 1874, aged 46. He had married Agnes Laughlan in 1867.

Concentrating though on the curling connection, Leslie has an auction catalogue which describes the sale of other John Levack paintings. This was undated, but I was able to find out that it referred to a sale by Muir and Dalziel, an auction house in Glasgow, on Wednesday, February 23, 1910. Intriguingly, one of the paintings in the sale was described as 'The New Monkland Curlers'. One can only speculate that there is another John Levack painting 'out there', and what it depicted. Could it have been a preliminary sketch or smaller version of the huge 1857 painting? I wonder if it still exists.

A postscript to this article is that I've also been contacted by a descendant of Gavin Black, the local landowner on whose land at Rawyards the curlers were depicted. But that's another story! 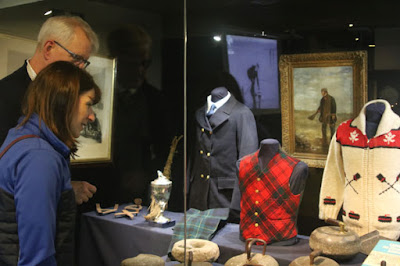 The painting of Peter Thomson hangs in the rear of Case 1 at the exhibition. Over the next couple of months I hope I will be able to highlight some of the other treasures on show. And if you attend in person you will be amazed by the variety and quality of the items that are in the exhibition.

Thanks to Leslie Porter for sharing her family history with me, and for sending me the photo of her great great grandfather. Also to helpful staff at the Mitchell Library in Glasgow, and at the Summerlee Museum of Scottish Industrial Life. The large image is from the Art UK website. The others were taken by me. The painting of Peter Thomson which belonged to David Smith is now is in the care of the Scottish Curling Trust.
Posted by Bob Cowan at 19:26

Looks fantastic! Can't wait to make the journey north to Hampden Park to see it for myself.

Excellent work in staging this important exhibition at the home of Scottish Football. Congratulations to all involved and a great tribute to the late, great, David Smith, curling historian, extraordinaire.