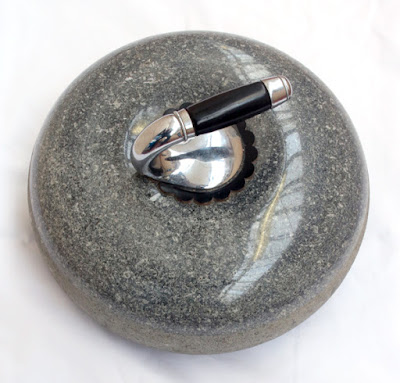 At first sight this looks like a normal Welsh Trefor curling stone, with a chrome handle, dating from the 1960s. But there's a discovery to be made when you turn it over. 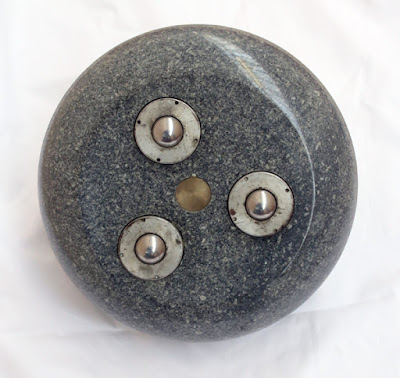 Underneath there's no running band. Rather, the stone has been designed to travel on three ball bearings inserted into the rock. The stone belonged to David Smith, and I never found out from where it came. Recently though I've discovered how it might have been used ... in the sport of 'Roll Curling'.

Roll curling was first played in Europe in the 1960s. The game was marketed by a Dutch company, Ocriet Rollcurling Ltd. The parent company, Ocriet, manufactured a special concrete product (see here) at their factory at Eemnes. 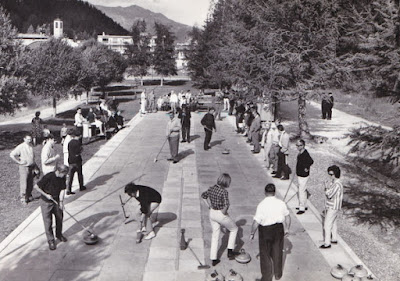 Here is roll curling being played in the Swiss resort of Montana-Vermala, at an altitude of 1500 metres. Note the use of brushes (!), and the 'dolly' to the side of the rink on the right. The photo is a postcard that was mailed in 1967, so the action must be from before that date. The (French) caption states that the photo shows 'new summer curling games'. 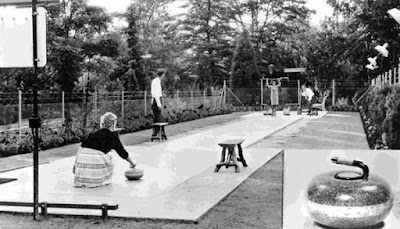 Here is a roll curling rink at the Berghotel in Amersfoort, Netherlands, in 1962. This image is from the history of the Ocriet factory, in a Dutch publication, Historische Kring Eemnes, in March 2011.

The first roll curling rink to be constructed in Britain was at the Duke of Edinburgh public house, Ferndale Road, Clapham, London, in December 1963. There had been a tennis court on the site previously.

The Aberdeen Press and Journal described the opening game, "Its British beginnings in a garden in Brixton may seem modest, but municipal authorities at holiday resorts and owners of recreation centres are more than a little interested."

"Actually, there is little to describe about this new game which does not differ from the traditional one played on ice. The rink, marked with green house at one end and a red house at the other, a back score and hog score, is laid out in reconstituted stone as smooth as a shove-ha'penny table. The curling stones move and twist mounted on ball bearings."

Two teams, representing Scotland and Holland, contested at the opening of the rink. 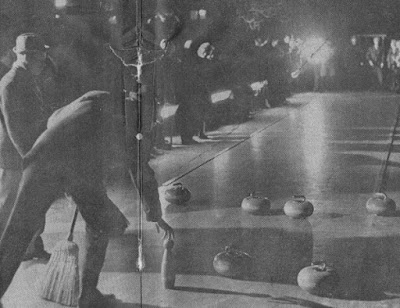 This undated news/magazine photo is somewhat damaged but shows a game underway at the Brixton pub. Note the 'dolly', and that the skip has a broom in hand. It looks to be nighttime. The rink is somewhat shorter than in the normal sport of curling on ice.

The rink survived in the pub's garden for at least eighteen months, before falling foul of planning regulations.

I was excited to find that some video footage of play has survived. A short feature on the game was made by British Movietone, and can be watched below, or larger, here.


There was considerable interest nationally in this form of 'summer curling'. 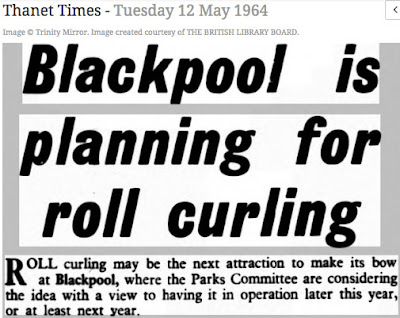 On May 12, 1964, the Thanet Times mentioned that Blackpool Parks Department was considering introducing the game as an attraction in the town.  As far as I'm aware this idea was not progressed.

And in August 1965, the Norwood News reported that roll curling had been demonstrated at the Crystal Palace, London, during a multi-sports event at the venue.

Roll curling as described here did not stay the course. Indeed, Ocriet Rollcurling Ltd had been wound up by 1975.

'Iceless' stones are now (2019) made by the Tiano company in China, see here.

Two mysteries remain, and my research continues. Were the stones used in roll curling manufactured by Kays in Mauchline? Or were they made of Ocriet material?

I have heard tell that roll curling (or something very like it) was played on the promenade at Largs in the 1960s. The search is on to find out more!

The stone pictured at the top of this article is now in the care of the Scottish Curling Trust, and in store at Stirling. Other photos in this article are as described or from my own collection. The British Newspaper Archive was once again a major research source.