The Cult of 'Men With Brooms' 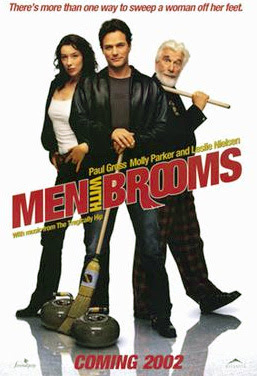 I'm sure that in lockdown many curling enthusiasts have watched (again) 'Men With Brooms'. I'm a fan of the movie. That's a promotional poster above. It's an enjoyable rom-com, based around the sport of curling in a small Canadian town. It came out in 2002, and was directed by Paul Gross, who also stars in it. Its IMDB entry is here. 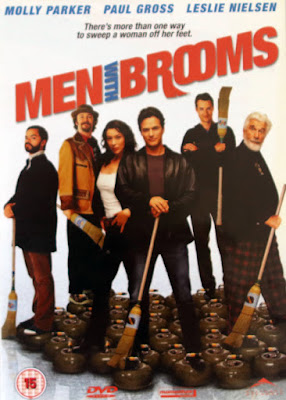 This is the DVD that I have of the film. According to its Wikipedia entry (here), "The film now has a cult following on DVD. Many relish the gentle Canadian comedy with its wry look at its country."

The interior curling action was filmed in the Hamilton and Brampton curling clubs.

The movie grossed $4.2 million dollars at the box office.

More about Paul Gross and the film in this blog post here written by Angela Pressland.

Of course, if you are a fan of the film, and a curling collector, having a copy of the film will not be enough. You could look out for the soundtrack of the movie. 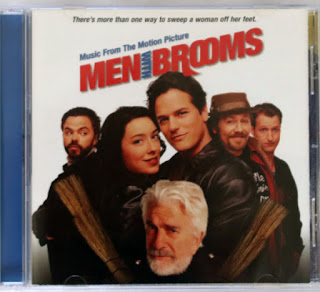 Here it is on a CD, issued by Universal Music, Canada. One of the tracks, 'Silver Road' by Sarah Harmer and the Tragically Hip, is a favourite of mine and is online here. Silver Road is the first track on the CD. The others are:

'Throwing Off Glass' by The Tragically Hip

'Life' by Our Lady Peace

'Mass Romantic' by The New Pornographers

'Diggin' a Hole' by Big Sugar

'Can U Tell' by Pepper Sands

'Leading Me Home' by Chantal Kreviazuk

'Kiss You 'Til You Weep' by Paul Gross

'Watching Over You' by Holly McNarland

'Oh Honey' by The Tragically Hip 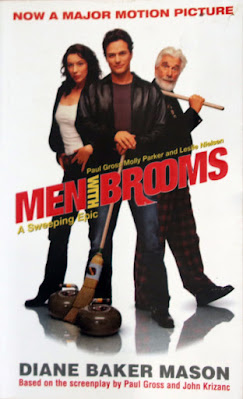 Unusually perhaps, the film is not based on a book. Rather, a book of the film, titled Men with Brooms: A Sweeping Epic, was published after the movie's release, by McArthur and Company, Toronto, in 2002. It is based on the original screenplay (by Paul Gross and John Krizanc), and was written by Diane Baker Mason. I read a lot and I have to say that the book is great. And it explains where all the beavers that appear in the movie come from! The summary of the book's plot in the catalogue entry at the National Library of Canada reads, "Four friends return to a small town in Northern Ontario to bury their curling coach and settle old debts." 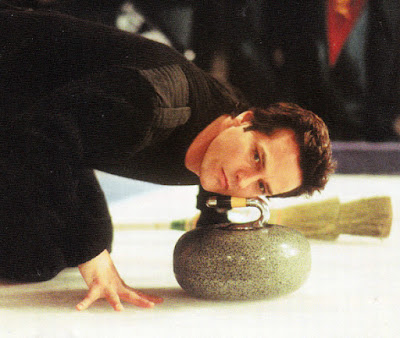 This image is from the CD sleeve.
That should be it for fans of the movie. Unfortunately (in my opinion), a television adaptation followed some years later, the first of twelve episodes broadcast on CBC on October 12, 2010. The series is set in the fictional town of Long Bay, Ontario, and features the members of a local curling club. The curling scenes were filmed at the Fort Rouge Curling Club in Winnipeg, Manitoba. 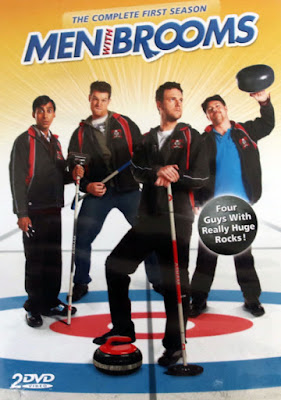 'Men with Brooms (The TV Series)' aired for one season and was not renewed. I have a two-disc DVD of all twelve episodes (issued in 2011), and during lockdown I watched them all. Part of my life I'll never get back. Being kind, let's just say I can understand why the series was not renewed. The Wikipedia entry for the TV series is here. The IMDB entry is here. And here is a review by someone who enjoyed the series.

Images are all from items in my curling collection.
Posted by Bob Cowan at 15:14