Although curling is seen these days as a team sport, there is a variation of the game which tests an individual curler's skill. Such Points competitions date from the earliest years when curling clubs were formed. For example, it is known that the Duddingston Curling Society had a competition in which individual members had to play three different shots - drawing, striking, and inwicking. A gold medal was awarded to the winner for the first time in 1809.

Many long established curling clubs played variations of Points. One such was the Currie Curling Club, which had devised a more comprehensive system involving eight different shots, each of which had to be attempted four times.

In 1839, a year after its formation, the Grand Caledonian Curling Club (as it was then called) made the decision to award medals to encourage the sport amongst its member clubs. There were District Medals, see here, and Local Medals. The latter were for individual play, in Points competitions. (More about Local Medals is here.)

The rules for Points were first published in the Annual for 1839-40. These rules, with the various shots to be played, were essentially those that had been used by the Currie CC.

The first of these regulations was, "A circle eight feet in diameter shall be drawn round the tee, and a central line or score between the tees to the distance of twenty feet from the further tee." This is of interest because this eight foot diameter (four foot radius) circle was the first of any circle required to be scratched on the ice for ANY type of curling. At this time the regular game did NOT require circles to be drawn on the ice, see here.

Four stones were played at each of eight types of shot. The Annual describes these:

"Every competitor to play four shots at each of the eight following points of the game, viz, Striking, Inwicking, Drawing, Guarding, Chap and lie, Wick and curl-in, Raising, and Chipping the winner."

These were illustrated as follows in three panels: 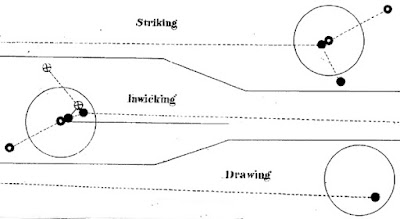 (1) Striking. A stone placed on the tee to be struck out of the circle.

(2) Inwicking. One stone is placed upon the tee, and another (in two of the chances to lie on the opposite side of the central line from what it is in the other two) two feet distant from the tee, making an angle of 45° with the central line: the played stone to hit against the latter and perceptibly move the former.

(3) Drawing. The stone played to lie within the circle. 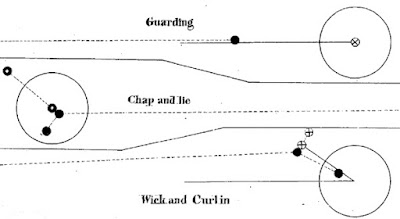 (4) Guarding. The stone played to rest, however little, on the central line.

(5) Chap and lie. A stone placed on the tee to be struck out of the circle, but the stone played to lie within it.

(6) Wick and curl-in. A stone is placed seven feet distant from the tee, and making an angle of 45° with the central line: the stone played to hit on this stone, and rest within the circle. 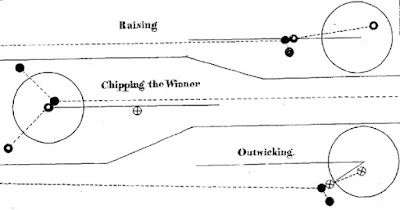 (7) Raising. A stone placed on the central line, and seven feet distant from the tee, to be struck into the circle.

(8) Chipping the winner. One stone is placed on the tee, and another at ten feet distance, just touching the central line, and half guarding the one on the tee: the stone played to pass the guard, and perceptibly move the other.

Scoring was described in this way, "Each successful shot shall count one, whatever be the point played at. No stone shall be considered within, or without the circle, unless it clear it; and every stone to be held as resting on the central line which does not completely clear it: in every case as ascertained by a square."

This means that the maximum score possible in 1839 was 32. If two players finished on the same score, a further point could be played, that of Outwicking. The rules stated:

"In the event of two or more competitors gaining the same aggregate number of shots, they shall play four or more shots (at the desire of the judge of the competition) at (9) Outwicking, where a stone placed four feet distant from the tee, at an angle of 45° with the central line is to be so struck as to lie within the circle."

A note states, "It will save much time if, in playing for Local Medals, two rinks be similarly prepared parallel to each other, the tee of the one being at the opposite end from the tee of the other. Every competitor plays both stones up the one rink and immediately afterwards down the other, finishing at once all his chances at each point." 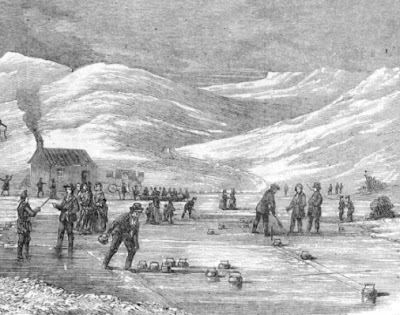 Remarkably, there is an early image which shows the curlers of the Fingask Curling Club at Points. This engraving, part of which is shown above, was published in the Illustrated London News on January 7, 1854. The Points contest had been held the previous season, on February 17, 1853. The members of the Fingask CC were playing for a medal awarded to the Club by Lady Murray Threipland, the Club's Patroness.
Studying the image, it can be seen that two rinks are in use, at ninety degrees to each other.

Points competitions continued to be played for under the early rules for many years. But, by 1887, changes to the rules for Points competitions were being considered, following proposals by D Croll of the Broughty Ferry Curling Club. A special committee was set up to consider these proposals, and new rules were agreed at the Annual Meeting of the Representative Committee of the Royal Caledonian Curling Club, held in the Waterloo Hotel, Edinburgh, on Wednesday, 25th July 25, 1888.

These new rules were:

1. Competitors shall draw lots for the rotation of play, and shall use two Stones.
2. The length of the Rink shall not exceed 42 yards; any lesser distance shall be determined by the Umpire.
3. Circles of 7 feet and 4 feet radius shall be drawn round the Tee, and a central line through the centre of the 4 foot circle to the Hog score.
4. Every Competitor shall play four shots at each of the eight following points of the game, viz: Striking, lnwicking, Drawing, Guarding, Chap and Lie, Wick and Curl in, Raising, and Chipping the Winner, according to illustrated definitions.
5. In Nos. 2, 6, 8, and 9, two chances on the left and two on the right.
6. No Stone shall be considered without a circle unless it is entirely clear of that circle. In every case a square is to be placed on the ice to ascertain when a Stone is without a circle, or entirely clear of a line.

This brought the dimensions of the house into line with that in use for regular team play, ie seven foot radius. And now a perfect play counted a score of two, with one point on offer for a partial result, see below.

Just a couple of years later, at the Annual Meeting in 1892, a new 'point' was added, that of 'Drawing though a Port'. Apparently, this was already being played in Canada, and so the Royal Club brought their Points' rules into line. 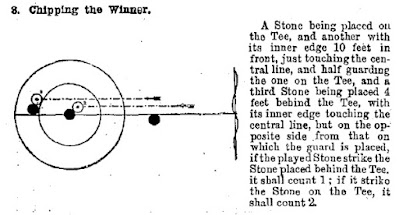 Note that the new point, drawing the port, fitted in as the ninth point to be played in any competition, with outwicking retaining its position as a tiebreaker.

These points were played in competitions until 1938. Then, as noted in the Annual for 1938-39, the size of the outer circle was allowed to be variable, ie "Two Circles, one having a radius of 4 feet and the other having a radius of not less than 6 feet and not more than 7 feet, shall be drawn round each Tee." This was to accommodate the change in the size of the head in indoor rinks (to twelve feet in diameter), as well as allowing for the continued use of fourteen foot diameter rinks in outdoor play. It wasn't until 1963 when the diameter of the outside circle was standardised to twelve feet.

The current rules for Points, with better illustrations, can be found online in the RCCC 2020-21 Rulebook here, pages 78-89. 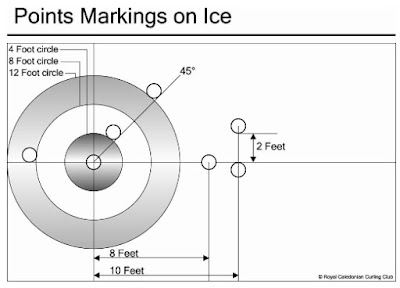 This is the illustration in the 2020-21 Rule Book showing the markings to be made on the ice. 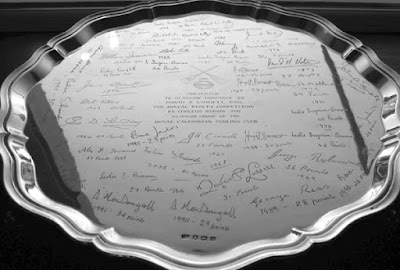 In 1958 David Liddell presented a silver salver to Glasgow Province. Clubs in that Province joined together to play each season for this trophy. Six sheets of the main curling rink at Crossmyloof were used, but such were the 'idiosychrasies' of these, that some of the points asked for were extremely difficult, if not impossible, to play. However, much fun was enjoyed on these occasions, the winner's signature being engraved onto the Salver. The Salver is still played for, most recently at Braehead.

I always found Points play frustrating. But my proudest moment came when my club decided to hold its local Points competition at the four-sheeter at Forest Hills, north of Glasgow. I came second on the day, but I should declare that, because of the snow, only two members made it to the Kinlochard venue! (I miss that old Saab.) 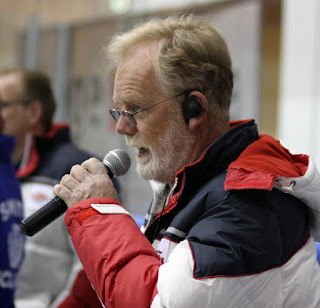 Last year the sport of curling lost one of its 'characters', Leslie Ingram-Brown. Back in his playing days, he relished, and excelled, in Points play. His name can be found on six occasions on the Liddell Salver, above. I found myself thinking of him often as I wrote the above article. RIP Leslie.


Much of the information in this article comes from old RCCC Annuals. The photo of the Fingask competition is from the Illustrated London News, retrieved via the British Newspaper Archive. The photo of Leslie is my own. The Liddell Salver image is from the Glasgow Province website. Thanks to Robin Shand for help with this article.