Not all curling stones originate on Ailsa Craig. This was particularly true at the end of the nineteenth century when you could buy curling stones of a variety of types, as David Smith wrote in a blog article, see here. Back then, if you wanted to curl, you had to purchase a pair of stones for your own use on outside ice. There was a variety of stone types to chose from, such as Burnock Water, Crawfordjohn, Carsphairn, Crieff Serpentine, Tinkernhill and of course three types of Ailsas (Red Hone, Blue Hone, and Common). Where exactly had the different types of stone come from, and who had made the raw material into curling stones? 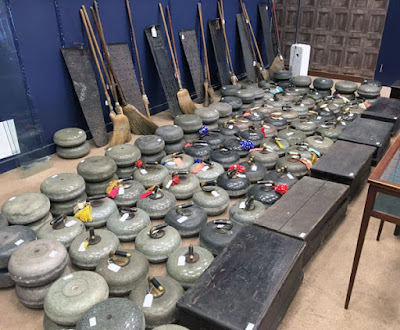 Just before lockdown, I attended an auction viewing, at McTear's Auctioneers in Glasgow, where the contents of Partick Curling Club's house in Victoria Park were to go on sale (above). It was fascinating to look at the many stones, and to try to identify them. A few days later I followed the auction online, and I believe the sale went off successfully. It was sad in a way that such a sale had to take place, but hopefully all the lots went to good new homes with collectors and curling enthusiasts. One such is Graeme Adam, my old skip, who has an unrivalled collection of stones of different types.

Back in March, Graeme involved Lindsay Scotland, mastermind of the Historical Curling Places site, to begin thinking of a map with which might show where the various curling stone types originated, and also where these materials were turned into curling stones. 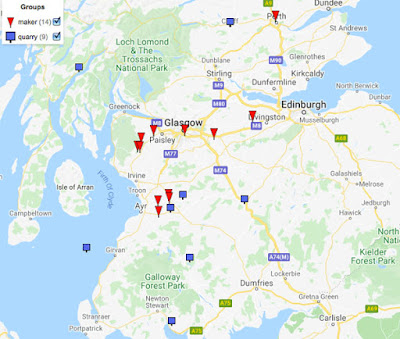 This map has now gone online. Above is a screenshot of just part of the map. The full map shows 'places' as far north as Inverness, and as far south as Trefor in Wales, and is here.

The map currently has fourteen ‘makers’ and nine ‘quarries’. It works in the same fashion as the existing maps on the Historical Curling Places site. Zoom in, click on a place, and click through for more detailed information.

I was happy to assist with the project in a small way. Harold Forrester, expert 'pondhunter', has also helped. I had already written about the source of 'Crawfordjohn' curling stones, here, and 'Carsphairns', here.

As the project developed, it soon became clear that research would lead us into the very disparate areas of geography, geology, industrial archaeology, and social history. I'll mention here just three examples of new information which has come to light.


The first concerns the origins of Kays in Mauchline, the company that still makes curling stones today. The original company of T and A Kay was begun by two brothers, Thomas Kay and Andrew Kay, around 1876. Andrew, the younger brother, married Catherine Kirk at Ochiltree in 1877, and, according to the census in 1881, the couple were living at the Haugh, with three daughters (age 3, 2 and 8 months). In that year Andrew was described as a curling stone manufacturer with thirty employees.
Andrew Kay died on June 23, 1887, at just 32 years old.
In his book 'Curling: an illustrated history', David Smith suggests that Andrew Kay's widow 'evicted' her brother-in-law. I've never been happy with this. The opposite may have been true, and she had to fight to keep her share of the business.
There was legal action, and the business of T and A Kay went to auction, the details of which can be found in the Ayr Advertiser in 1888. Thomas Kay won the auction, and thus took the business name. He did not get the premises at Haugh because these were rented from Sir Claud Alexander. Catherine was able to keep hold of these. She then developed a successful company under a new name, Andrew Kay and Company. Thomas Kay also continued to make curling stones and moved into Mauchline. The two companies were rivals for some years thereafter.

Catherine Kay had more than her fair share of grief in her life. At the beginning of 1887, she and Andrew now had four children, and she was pregnant again. At 11.55 pm on June 18 and at 30 minutes past midnight on June 19, 1887, she gave birth to twins, Andrew and Thomas - no doubt named after her husband and his brother.

Four days later, on June 23, 1887, her husband Andrew died, age just 32. Then on July 20 and 22 both the twins died. It must have been a heartbreaking time for Catherine. But she was a strong enough woman to fight for her livelihood, and become the owner of a successful business. There's much much more to be written about her life, but that will be for another time. I'm still looking for a photograph of this remarkable woman who deserves to be better known. Look at the linked page on the map to read of the history of the Andrew Kay Company through the twentieth century.

One mention in an old newspaper shows that Catherine Kay obtained the rights to a quarry on the Sorn estate. After a bit of research, I found this to be a quarry on Tin Corn Hill (which is still operational today). At some point, when communication was mostly verbal, the name of the stone was garbled as 'Tinkernhill' and it is by this name that stones from this quarry became known to curlers of the time. 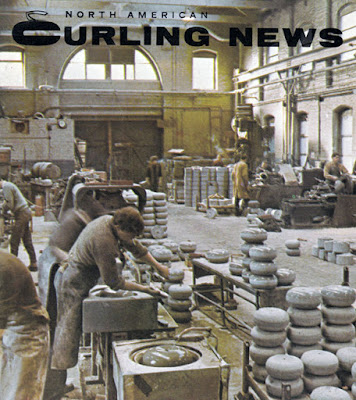 The Scottish Curling Stone Company began life in the 1960s in Polmadie in Glasgow. I was excited to find the image above showing the inside of the factory. This was the front cover of the North American Curling News of November, 1966. The Polmadie area has long since been redeveloped, and I do not know exactly where these premises were. I'm wondering if they were in part of the old locomotive works? The company was to move to Inverness later in the decade. The image is a rare one indeed, and captures a moment in time in the sport's history. The stone being used was from Ailsa Craig, to which the company had the rights at the time.

Finally, the name 'Keanie' turns up often in any study of curling stone makers. The new map has four 'Keanie' entries. I had been intrigued a couple of years ago, when visiting the National Library of Scotland at the Kelvin Hall, to find a relatively recent photograph of a Keanie Company based in Bellshill, Glasgow. When looking for information on this company, I came across a similar image and an article in The Sphere newspaper from October 1954. It shows curling stones being packed into barrels to be shipped to Canada. What sort of stone were these made from? The image caption reads, 'Curling stones earn dollars for Britain', so it is clear that most of the stones were to be exported to North America. 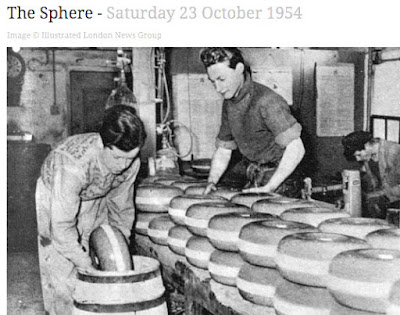 The penny dropped when looking at the website of the Canada Curling Stone Company, in Ontario. The company today makes new stones using Welsh Trefor, and refurbishes old stones. On their page titled 'granite types' see here, there is a description of 'Keanie' stone, below. 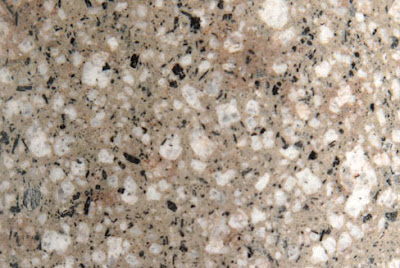 I recognised this material immediately as I had visited the quarries at Furnace on Loch Fyne a year ago. From this article I knew that Furnace had supplied curling stone blanks, as well as granite setts for roads, in the 1950s. It was clear that 'Keanie' stone was from Furnace, and so the curling stones exported in 1954 by the Keanie Company in Bellshill were made from stone from the side of Loch Fyne. I have a wonderful image in my mind of the stone blanks being transported from the quarry by puffer! Since then the quarry at Furnace has been opened up again and is part of the Breedon Group, see here. But the days of that quarry supplying curling stone material are long past.

The curling stone and curling stone makers project is very much a work in progress. To quote David Smith from 2008, "I personally couldn’t recognise a Blantyre, whether black or silver grey, and although I know where Muthill and Earnock are, I have no idea what a stone bearing the name of these places looks like. As for Giells, is this a place or a person?" Yes, there's still much more to be discovered.

Lindsay Scotland says, "We would welcome any more information that is out there, whether that would be new places, and corrections to, or expansion of, what we currently have documented."

Thanks, as always, to the British Newspaper Archive. The image of 'Keanie' stone is from the Canada Curling Stone website. The other images are from my own archive, or are as indicated.
Posted by Bob Cowan at 09:38

Great Article! There are things we may never know.. and that is ok.. Thank you, Bob. Hope you are well.