Curling owes much to its major sponsors. Other businesses help in other ways, by advertising in curling magazines, on websites, and in event programmes. Adverts in old programmes become more interesting as the years go by. During lockdown I found myself avidly scouring old curling event programmes and magazines for items of interest. Adverts I found could be classified into three types. There are those of businesses related to the sport, and these usually have a curling 'theme'. Other adverts were for companies whose page in the programme just used a generic non-curling image taken from stock. But I was impressed with those companies, big and small, who had spent time and money to design an advert with a curling related theme, even though their business was not related to the sport itself.
Here are some I like from years past. 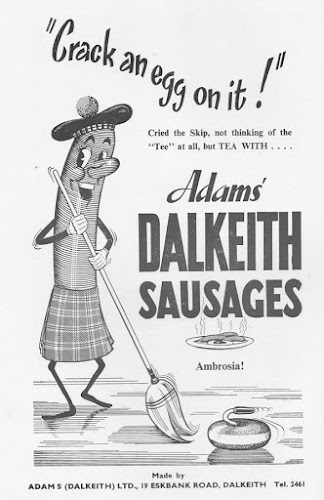 This advert ran for many months in the Scottish Curler magazine in the 1950s. It still makes me smile! 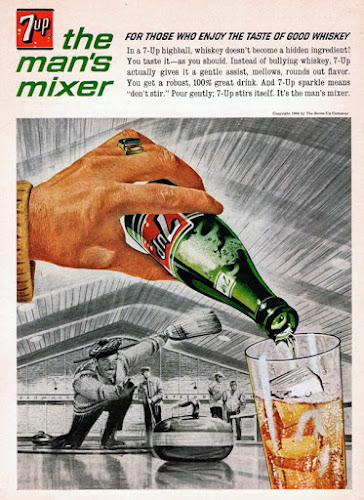 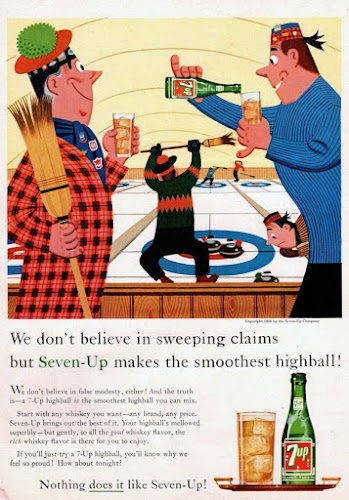 Here's the same company using a cartoon, in an advert of the same vintage. 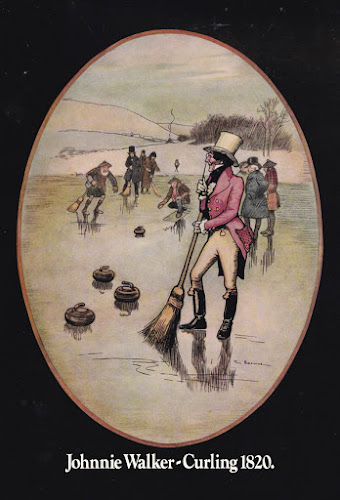 Johnnie Walker Scotch Whisky adverts were always of a high quality. This curling one appeared in the programme for the 1972 Air Canada Silver Broom at Garmisch Partenkirchen. 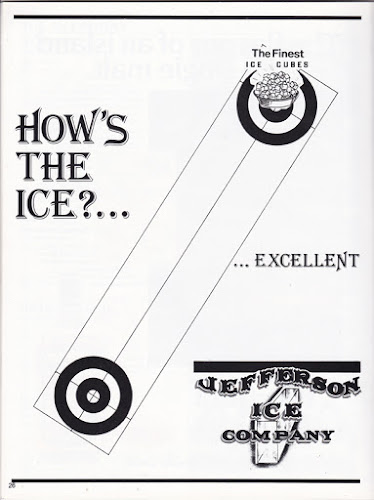 Here's a smaller company, with a simple but effective advert, which took space in the programme for the Glayva World Ladies, at Lake Forest, Chicago, in 1987. 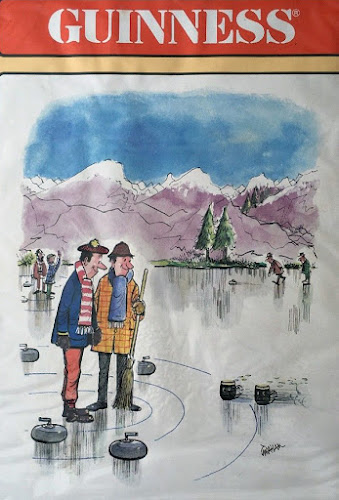 Nothing but the highest quality for Guinness! I don't have the dates when this advert was used. 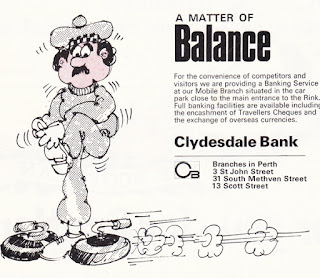 The Clydesdale Bank prepared this advert for the programme sold at the 1975 Silver Broom in Perth, Scotland. 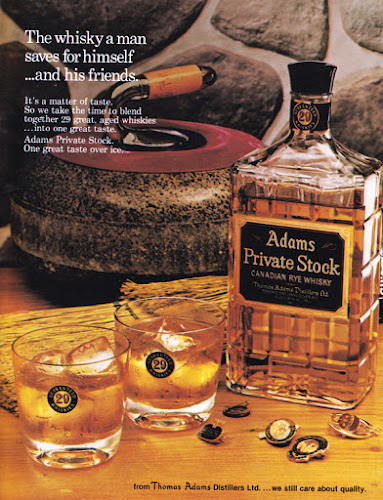 Here's an advert for a Canadian Rye Whisky. It appeared in the programme for the 1978 Air Canada Silver Broom in Winnipeg. That's a Common Ailsa stone in the background, but look closely for the corn broom and the pin badges in the foreground. 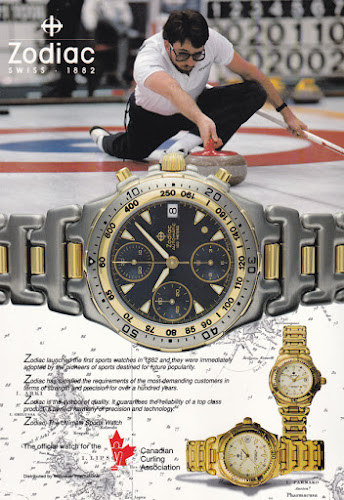 This advert appeared in the programme for the 1995 Bank of Scotland World Junior Curling Championships at Perth, Scotland. Who is the curler? 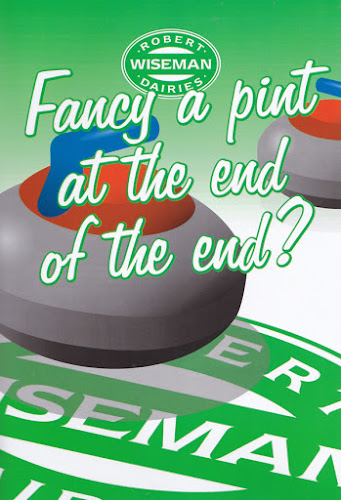 A local business, whose founder and management all curled, stepped forward to support the World Women's Championship programme in 2005 at the Lagoon Leisure Centre, Paisley, Scotland. 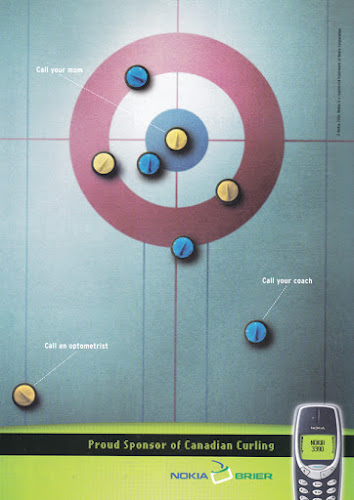 In the era before smart phones, how many of us had a Nokia mobile? This simple, but clever, advert appeared in Ford World Championships programme for Lausanne, in 2001. 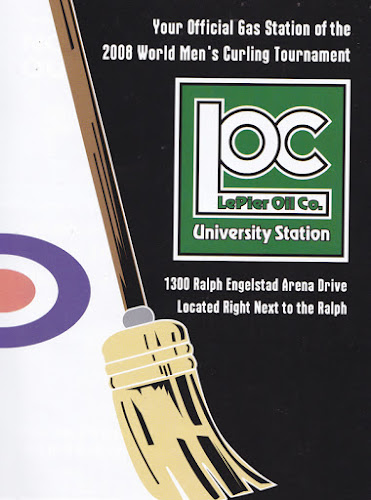 Even small businesses supported an international event in their community. This full page ad, for a local petrol (gas) station, appeared in the programme for the 2008 World Men's Championship in Grand Forks, North Dakota, USA. I wonder how many WCF events have had an 'Official Gas Station'? 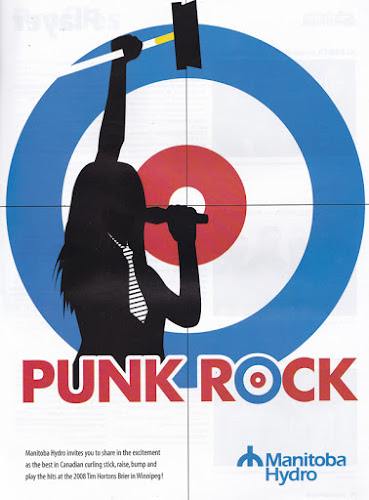 If I had to pick a favourite curling advert, it would be this one by Manitoba Hydro. OK, the punk rock era was well before 2008 when this advert appeared in the Canadian Curling Association's Extra End publication, doubling as the programme for the Tim Horton's Brier in Winnipeg. 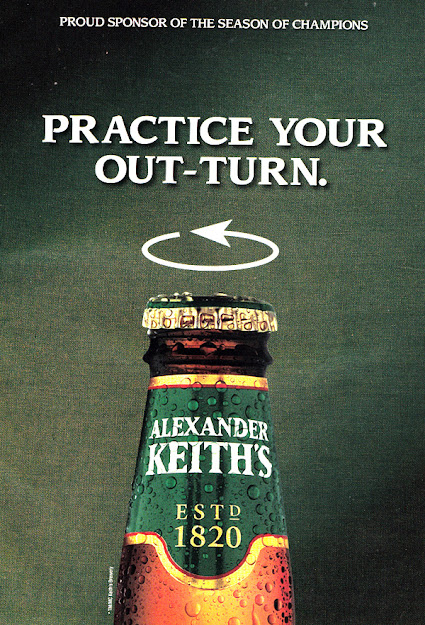 Simple and clever. Full marks to the creative team at Keith's Brewery who devised this advert, which appeared in Curling Canada's Extra End publication, serving here as the programme for the Ford World Women's in 2008, in Vernon, BC. (Here in Scotland twist-off tops like this have never been common.) 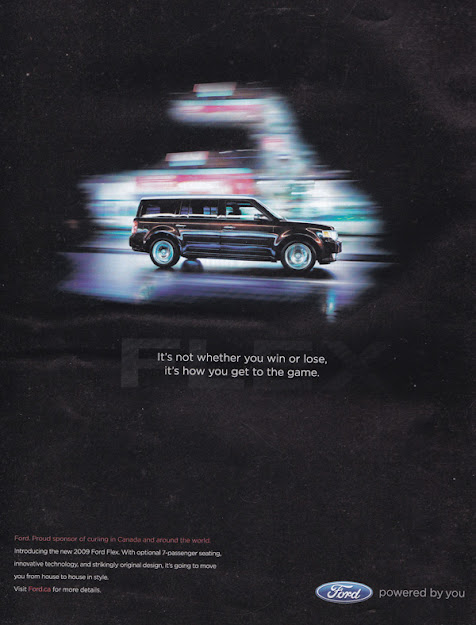 Ford continues to be a great curling sponsor. Here is an advert that appeared on the back cover of the Canadian Curling Association's Extra End publication which was the programme for the World Men's Championship in Moncton, New Brunswick, in 2009.

The above adverts are just a few of many. Congratulations to the innovative minds of the designers. In other categories we might look out the most innovative advert by a curling rink equipment provider, or a business which sells curling clothing and accessories. But that will be for another lockdown!

All images are from my own collection.

ADDED LATER: David Sgriccia of the Detriot Curling Club has forwarded this Stanfield’s Underwear advert which ran in newspapers throughout Canada in 1954 and 1955. Full marks!

David says, "It used to be said that if you were nervous before public speaking, then should imagine your audience in their underwear.  Well, now if you are going to be curling against top-notch opponents you just have to imagine them in their underwear!"
Posted by Bob Cowan at 10:23