Curling in the Footsteps of History: Part 1

Robin Copland has written about the Canadian curlers' visit to Scotland in 1909. His booklet, Curling in the Footsteps of History, is reproduced here in four parts.

The pioneering Canadian tour took place in January and February 1909. This important tour set the tone for future tours of Scotland from Canada. Like all tours, true stamina was required of the party – especially at the start of the twentieth century when planes and email were but dreams!

I do hope that you enjoy reading of their exploits while here in Scotland. A fuller version of the whole story is available in the 1910 RCCC Annual and that was my primary source for information. (There is a list of all my sources at the end of Part 4)

CHAPTER ONE – PLANNING AND PREPARATION

In 1903, after many invitations had been sent and rejected for one reason or another, a hardy party of Scottish curling tourists under the captaincy of the Reverend John M Kerr, toured Canada and the USA during a period of two months in January and February.

Five years later, at the Royal Caledonian Curling Club’s Annual General Meeting in Perth in July 1908, it was “resolved unanimously and enthusiastically to invite a team of Canadians to Scotland and return if possible the hospitality shown by Canada to the curlers from the mother country in the winter of 1902-03”. Although the notice was short for such an undertaking, the invitation was sent out specifically to coincide with Lord Strathcona’s Presidency of the Royal Club, his Lordship being “such a link between Scotland and Canada … and had taken such a keen concern with the advancement of ‘Scotland’s ain game’”. 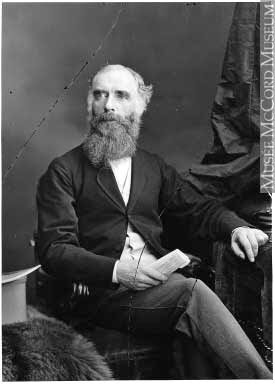 When the message was flashed back that Canada cordially accepted the invitation, the news was received with “unmingled delight” in Scotland’s curling communities although some privately feared that the size of the organisational task that lay ahead would perhaps preclude the tour ever taking place. The doubters should not have worried! Within two months a team, with representatives from as far afield as Halifax, Nova Scotia, to Dawson City, Yukon, had been picked and were making plans for their trip – this, mind you, in a time when the phone was a rarity and the only quick way to get a message cross-country was by telegram.

A small committee was put together in Scotland to organise a programme that mixed competitive curling matches with dinners, hospitality and sight-seeing. The programme extended over five weeks. As a sign of the times, it included no curling on any of the six Sabbath days and indeed, Church Services were organised on each of them, including two at Scotland’s great Cathedrals, St Giles in Edinburgh and Glasgow Cathedral in the west.

There was only one covered artificial rink at Crossmyloof in Glasgow. This had been “very kindly placed at the service of the Royal Club in the event of John Frost not having the decency to provide natural outdoor ice for the occasion”. It was just as well and in the event, many of the matches took place in this wondrous new facility on Glasgow’s south side.

CHAPTER TWO – ARRIVAL AT LIVERPOOL AND THE JOURNEY NORTH

Although by this time, trans-Atlantic liners were driven by steam, there was still uncertainty over arrival times depending on the weather. This was specially the case for winter crossings. The Empress of Ireland was thus listed to arrive at Liverpool on either the 15th or 16th of January. Although she enjoyed a capital crossing from Canada, the tide prevented her docking until the morning of the 16th, so the Scottish welcome party that had travelled down to Liverpool on the 15th had to wait a night before welcoming their Canadian brethren to the shores of their ancestry. They passed “a pleasant evening” in the company of members of the Liverpool Curling Club before marching to the dockside in procession behind Pipe-Major Mackay, carrying their besoms high and wearing their Tam o’ Shanters with pride.

Old friendships from the earlier tour were rekindled and the Canadians, sporting their Dominion heather button-holes, welcomed the visiting party onto their ship where a toast was drunk to the success of the tour. A special train transported the party north directly to Edinburgh’s Waverley station. Interestingly, two ladies accompanied their men on the tour, something that would perhaps not be countenanced in these supposedly more enlightened times one hundred years later!

The train was held up for fully an hour by a fall of snow near Newcastleton on the route north. Meantime “the visitors and their friends thoroughly enjoyed themselves … by singing songs, cracking jokes and spinning yarns”!

During the journey north, a calculation was made: the average number of miles travelled by each of the tourists – just in getting to Halifax to join their ship – was 1200. One hardy soul, the cheery Mr McPherson of Dawson City, would travel something like 14000 miles in total over land and sea during the tour. He used various modes of transport from pony and trap to express luxury liner through trains and automobiles!

The welcoming party of Edinburgh curlers had a long wait at the Capital’s Waverley Station due to the blocked line at Newcastleton. It is not recorded how this time was spent, though looking back over a hundred years, one cannot help but wonder if the proximity of the bar at the North British Hotel might give us a clue!

The stationmaster, Mr Maitland, arranged for fog signals to be placed on the down line to warn of the train’s impending arrival. Sure enough, the loud retorts of their detonation gave the welcoming party due warning and two lines of local curlers stood on the platform. Mr Robert Cousin of Merchiston CC and Mr Mark Sanderson of Duddingston CC had been tourists to Canada and they lead the colourful lines of curlers, both from their own respective clubs, as well as representatives of the Waverley, Northern, Craiglockhart, Balerno, Currie, Corstorphine and Bathgate Curling Clubs.

As the train drew to a halt, the whole party erupted in cheers and each of the tourists was welcomed to Scotland individually and enthusiastically by each of the welcoming party. “A spirit of jollity” prevailed. Pipe-Major Duguid of the Queen’s Edinburgh Brigade struck up on his pipes and soon a large crowd of interested onlookers had gathered to view the procession of curlers as they made their way from the station platform up onto Princes Street and to the tourists’ hotel.

Once in their hotel, a speech of welcome to “the ancient capital of dear old Scotland” was given by ex-Provost Gordon. The Hon Duncan Cameron Fraser, Lieutenant-Governor of Nova Scotia and Captain of the tourists gave the first of many “thank-you” speeches on Scottish soil. He finished his first speech thus:

“We, like the Scots, would rather lose every time than win by aught that would lower us in the estimation of the people…”

Brave words that echo down through history to the present day!

Very few of these are the “great and the good”! The tourists were drawn from seven of the Canadian Provinces; almost all were from “middle class” backgrounds. Three of their number were from across the border in the USA and became honorary Manitobans for the duration! We should not be too surprised by this seeming anomaly as the 1903 Scottish Tour to Canada had included some of the northern States of the USA in its itinerary. 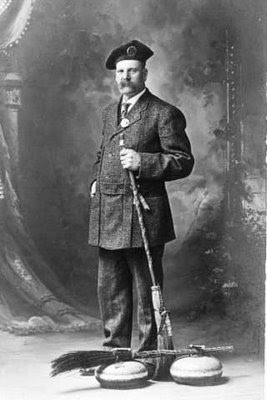 • Born 24 May, 1862, South Oakley, Parrish of Saline, Fifeshire, Scotland.
• Emigrated to Canada with his parents in 1883.
• Occupation: Contractor and businessman. He founded Logan's Funeral Home and Furniture Store in 1885. Logan's Funeral Home carries on business in the same location to this day and is managed by Alexander's great grandson, Hugh Logan. He was also responsible for the construction of several commercial buildings in Parry Sound.
• Co-founder, ardent curler and supporter of the Parry Sound Curling Club.
• Corresponded with Andrew Carnegie of Dunfermline, Scotland and was successful in securing his financial support for the purchase of the first pipe organ at Parry Sound's St. Andrew's Presbyterian Church.
• Fire Chief for the Town of Parry Sound, Church Elder and member of local Masonic Lodge.
Posted by Bob Cowan at 17:30

I'm looking forward to the rest of the story, Copey. I've read the account in the Annual but you tell in a user-friendlier way. Well done.

Great article Copey. I love the level of understatment regarding the good times that were had, reading between the lines I'd say there was enough booze consumed to sink a battleship !

Great article Copey. I love the level of understatment regarding the good times that were had, reading between the lines I'd say there was enough booze consumed to sink a battleship !