Despite numbers of curling clubs in England, particularly in the northern counties of that country, the popular press - or, in fact, the press in general - treated the game as a peculiarly Scots pastime and every time there was a considerable frost regaled the readers with anecdotes of the peculiar doings of their northern neighbours.

The Daily Graphic newspaper was founded in January 1890 as Britain’s first, illustrated daily paper. The illustrations were much sketchier than those in The Illustrated London News, The Graphic and some other weekly papers, because the artists had much more time to produce finished work for them.

In December 1890 there was a great frost. The Thames froze over from bank to bank at Twickenham for over a mile from Eel-pie Island to Crossdeep. The curlers of Crystal Palace Curling Club were able to play for the first time for several years. Back home in Scotland the Scots curled too, as was evidenced by the plethora of reports of matches for district medals, and local medals, and provincial medals, in the subsequent Annual of the Royal Caledonian Curling Club.

The new illustrated daily was not to be outdone. Page 7 of the edition of December 25 carried an argument FOR curling in England, and page 14 a small article and a sketch of 'The Roaring Game' at 'Dudingstone near Edinburgh.'

Here is the sketch: 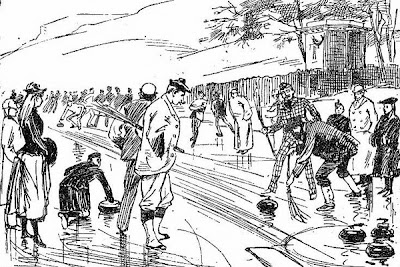 The caption is: CURLING IN SCOTLAND: THE 'ROARING GAME' AT DUDINGSTONE, NEAR EDINBURGH.

The artist obviously knew the place. Not only are the Scots attired like Scots - one is wearing the kilt - but the octagonal curling house, built by the Duddingston Curling Society in 1826, is clearly recognisable. (A scheme for its refurbishment is underway at present.)

And here is the article:

“The frost had long held London in its grasp before being felt in Scotland, but now its spell has been cast over the whole of the north country. In anticipation of the icy touch, curlers and others had made due preparation, and they are enjoying their favourite sport. Several bonspiels of considerable importance have already been played with the enthusiasm which invariably animates the brethren of the broom. The game, which has been sung by the poets and painted by the artists of the land, has drawn all sorts and conditions of men around the sticks. In the excitement which prevails as well-aimed stones dash across the hog-score to the broughs or (culminating triumph!) to the tee, social, political, and other differences all disappear. A story is just told of a nobleman who after a poor attempt was greeted by his skip, the local blacksmith, with the curiously-mixed remark, 'That’s na shot ava ye idiot – my lord.' The utmost good fellowship, however, pervades the ranks of the curlers; and after a dinner of 'beef and greens', their traditional fare, they pledge each other heartily in the white wine of the country."

The other passage argued for the 'acclimatisation' of the game in England, just as had been achieved with golf by 1890.

If curling can flourish in Scotland in spite of the fact that sometimes winter passes winter without giving a single chance of playing a really great match, why should it not also flourish in England, where there is a greater chance of frost than in any part of Scotland? For, curious as it may appear, the mean temperature of December and January is lower in the English Midlands, and even in the country between the Thames and the English Channel than in any part of Scotland, except the coldest of the central counties or the tops of the Highland hills. This winter, indeed, the normal difference between England and Scotland has been greatly intensified. It may be that in spite of the continuous winter frost it is not possible to acclimatise the game in England, but, just as the game of golf has found a home in the south as well as in the north, so it ought to be quite possible to carry to the south the game which for generations has been the favourite one of the north when the days are at the shortest and the frost of the keenest.”

Can anyone suggest why, more than a hundred years later, the game has achieved scarcely a toe-hold in England?