Curling in the Footsteps of History: Part 2

That there was a rink to play on at Myreside at all was due to a young groundsman called Scott, a keen, keen curler from the Borders. On his own initiative, he had constructed a concrete curling rink that, although smaller than regulation size, was used for curling until, in 1902, it became the floor of an implement shed. For Season 1902/03, Scott had made two pioneering Tarmacadam rinks at the side of the club pavilion and further, had installed gas lighting. For many seasons, the Watsonian CC played matches with neighbouring clubs when frost permitted.

On the Saturday night of the Canadians’ arrival in Scotland, there was a sharp frost in Edinburgh and a member of the Watsonian Curling Club, founded less than ten years earlier in 1898, took it upon himself to invite a number of the tourists to his club, there to enjoy an informal game of curling. For the next couple of hours, a cheery game was enjoyed before all participants adjourned to the pavilion for drinks and high jinks.

History records a victory on the ice for the Scots, though the games were not official and therefore do not appear in the record books.

It thus appears that the Watsonian Curling Club had the privilege of being the first curling club in Scotland to entertain members of a visiting Canadian team. The 2009 tour will have dinner in the Watsonian clubhouse on Thursday 29th January – the second last night that they will have in Scotland. I cannot help but think it is a fitting place at which to end their tour and hopefully, glasses will be raised in honour of the hardy souls who accepted the informal invitation a century ago. 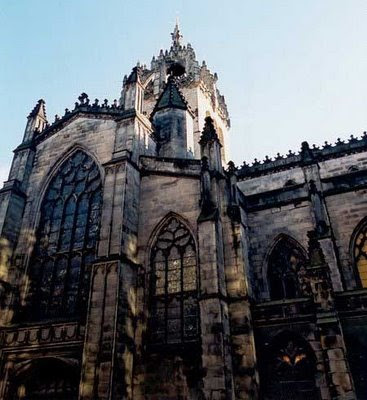 One of the features of the 1909 tour was the importance attached to Worship. Perhaps this should come as no surprise, though it is somehow quaint to reflect from a century on that it was absolutely expected that every one of the tourists would attend church on each of the Sundays that they found themselves in Scotland. No allowance seems to have been made for the possibility that different faiths may have been represented on the tour, although, to be fair, that is probably because there were none!

Thus the party attended a Service in their honour at noon on Sunday 17th January at St Giles Cathedral. The Reverend John White of South Leith conducted the service and gave “a very powerful sermon on the Responsibility of the Empire”. He spoke of the tour as “evidence of a growing friendship between the Mother Country and her daughter colonies”. The official report notes that, “the visitors were much interested in St Giles” and that each met the Reverend White in their hotel after the service. Indeed he became the first recipient of the official tour badge.

CHAPTER SIX – THE TOUR GETS UNDERWAY

Suitably refreshed after a relatively easy Sunday in the Capital and spiritually revived as they must have been after the thunderous sermon given by the good Minister from South Leith, the tourists were entertained by the Edinburgh Council on Monday morning. They visited the City Chambers and Edinburgh Castle before heading for Peebles by train on a line sadly now disused.

Though the weather in Peebles was dismal with rain falling from a leaden sky, the tourists received a warm welcome from local curlers who raised their brooms and shouted in their honour as their train steamed into the picturesque station. Later, they were honoured with a civic reception in the Town Hall. Flags flapped in the wind and handkerchiefs were chastely waved from the upper-floor windows along the main street.

What is striking about the 1909 tour – Peebles is just the first example – is the way that elected officials went out of their way to welcome the Canadians to their towns and cities. The tour was a huge event in Scotland and the tourists seemed to have caused a massive stir wherever they went.

Later that night, the curlers were entertained to dinner at the Peebles Hydropathic (now known simply as the Peebles Hydro Hotel). Sir Henry Ballantyne, a tourist himself on the 1903 tour, presided over the event and spoke of his pride at hosting the first official dinner of the tour. Many were the speeches thereafter and the toast list, looking back a hundred years, was mind-boggling in its length and complexity. These were different times from those we inhabit today!

The next morning must have been an exciting one for the party – many of whom were of Scottish origin, for a visit had been laid on to Abbotsford House, home of Sir Walter Scott – arguably Scotland’s most famous author. The party was joined by several local ladies and gentlemen and was conveyed in eleven motor vehicles, a rarity in those far-off days, and travelled to Abbotsford via Selkirk. After an hour in Scott’s famous old house, the party proceeded to Melrose where again, they received a raucous welcome from the townspeople. Again, there was a civic reception before the Canadians were given some time to explore the ruins of Melrose Abbey. Everywhere they went, they were feted, though sadly any plans that may have been made for curling had to be abandoned because of the weather.

Interestingly, two Canadian Maple Trees were planted on the site of the artificial curling pond in Melrose and another was later planted in the public park at Peebles. The party was then escorted by the town’s curlers to the train station, where they were given a most hearty send-off, “cheers being raised again and again”.

There were about twenty Freemasons in the party – that out of a total of thirty-seven curlers. Freemasonry then was a powerful force and movement and there were a number of events organised specifically for them. The first of these took place in the tour’s next stop, Kilwinning, where they were entertained by the Lodge Canongate, one of the most ancient Scottish Lodges, which at the time boasted of having the oldest Lodge Rooms in the world.

Obviously, we cannot go into what was said or indeed done at the Carlton Hotel that faroff night, except to say that Brother Duncan Cameron Fraser, the Tour Captain, Lieutenant-Governor of Nova Scotia and Past M.W Grand Master Mason of Nova Scotia was given the singular honour of honorary membership of the Lodge.

Throughout the tour, the Masonic members were spirited away from time to time to private dinners or entertainment. For example, on 16th February, after dinner in Aberdeen, the Masonic tourists were guests of the Provincial Grand Master at a concert.
Posted by Bob Cowan at 17:21

My wife's great grandfather, Robert Allan, is believed to have a curling partner of the then Duke of Argyll, with reference being made of a tour to Canada. Given that the 9th Duke of Argyll was Governor General of Canada, it seems more likely that he was an opponent rather than a partner, and since Robert was born in 1860, he could well have been a member of the 1903 touring party to Canada. Does anyone perhaps have a list of names of the touring party.

I enjoyed the newspaper articles very much - excellent work.