Women Curlers in the News 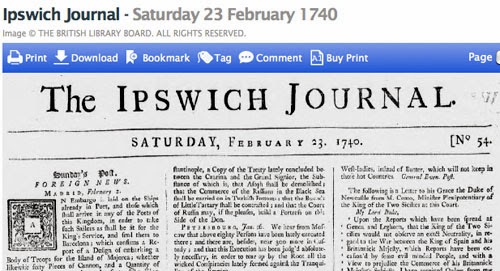 The first newspapers began to appear in the early eighteenth century. The Ipswich Journal, for example, was first published in August 1720, see here. The issue of Saturday, February 23, 1740, had four pages. What makes this newspaper - from Suffolk, England - of interest to the curling historian is a small paragraph which appears on page 2, the earliest reference to the sport that I've been able to find (so far) in the British Newspaper Archive.

I've mentioned the BNA in the blog before, and I'm a big fan. The British Newspaper Archive is a partnership between the British Library and brightsolid online publishing (BSOP, see here) to digitise up to 40 million newspaper pages from the British Library's collection. The project is just two years in and is expected to last ten years. You can read about all that is involved here. I have found it to be a tremendous resource, especially in tracking down information on English curling clubs and where they played, see here. It has proved well worth the subscription, and not just for curling related content! 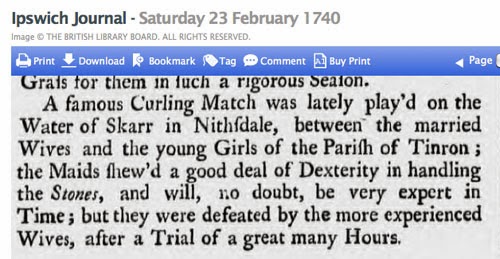 So, what was the first newspaper mention of our sport about? I got a surprise, see the screenshot above. Click here if you wish to see the full image of the page (purchase required). What is even more significant than the early date of the 'famous curling match' is that it involved two teams of women! The inclusion of the story in an English newspaper, at the bottom of a column on things Scottish, suggests that such a match was unusual, at least to the readers of the paper, if not to the inhabitants of Tynron Parish (as it is spelled today).

Tynron Parish is in Nithsdale, in Dumfries and Galloway in south west Scotland. There is a village of the same name. The Water of Scaur (as it is written nowadays) marks the east edge of the parish boundary with adjacent Penpont. A map showing Scottish parish boundaries can be found here, on the National Library of Scotland maps website.

At least one other newspaper ran the identical story. John Burnett in his book Riot, Revelry and Rout: Sport in Lowland Scotland Before 1860, published by Tuckwell Press in 2000, reports that the story appeared in the Belfast News Letter in 1739. Burnett comments, "In the period before evangelical seriousness limited the behaviour of women there is a range of references to women enjoying sport. It was not common for them to do so, but it was probably widely known."

Is John Burnett correct to say that 'it was not common' for women to enjoy a game of curling back in 1740, at least in the parish of Tynron? I'm not sure I agree with him. He may well be correct for other sports, but perhaps not for curling. Two things in the report suggest otherwise. The description of the curling match between the married and unmarried women indicates that it went on for some time ('a great many hours'), and that is unlikely to have been the case if the players were new to the sport. Even though the unmarried women (the 'Maids') were beaten on the day, the author of the piece says that they 'will, no doubt, be very expert in time', suggesting that there would be future opportunities for the women to play. Life in a rural community in early eighteenth century Scotland would have been very different to that today!

Let's not forget the men. Their matches may not have been newsworthy back in 1740, but it is not too big an assumption that they played too in Tynron parish whenever they could. Incidentally, in the nineteenth century there are reports of matches between bachelors and married men from many places throughout Scotland.

Did any Scottish newspapers mention the Tynron match? A date of 1740 is well before the founding of the Dumfries and Galloway Standard. I have searched, without success, for a mention in the Caledonian Mercury, first published in 1720 and available in the British Newspaper Archive, and in the Scotsman, available in the National Library of Scotland.

Who was the original author? We don't know. It is likely that the report was written for one paper, and picked up by others, often months later.

A curling match featuring two teams of women may well have been newsworthy, but the very mention of curling, without any explanation, in these English and Irish newspapers, does suggest that the sport was already well known as being played in Scotland, even to local readers.

David B Smith, when he wrote his 1981 book Curling: An Illustrated History, could find no written or printed references to curling in the years 1724-1771, despite that being the era that tradition suggests when the first curling societies were founded. The 1740 reference is thus rather significant. As I've mentioned above it is the earliest reference to the sport I've found in the titles so far digitised in the Britich Newspaper Archive.

We can but speculate on how the game was played on the Water of Scaur back then. It may well have been eight or nine aside, with each player delivering one stone.

The first Ordnance Survey 6 inch map of this part of what is now Dumfries and Galloway was not published until 1861. The newspaper report does not mention where exactly on the Scaur Water the match took place. The location may have been the frozen river itself, or where it had flooded onto adjacent land. You can find some lovely photos of the area here.

I will leave it to students of history to place the year 1740 into historical context. Suffice to say that King George II was on the British throne, and Robert Walpole was 'Prime Minister' (although this term was not in use at the time). The Jacobite Rebellion of 1745-46 was still in the future, as was the Seven Years War with the French, with the decisive battle, the fall of Quebec, in 1759. (The legend that Scottish soldiers melted down cannonballs to make iron curling stones around this time must certainly be taken with a pinch of salt!) The Treaty of Paris (1763) saw the French cede to the British all North American possessions, and a hundred years later, in 1867, the Dominion of Canada was formed. 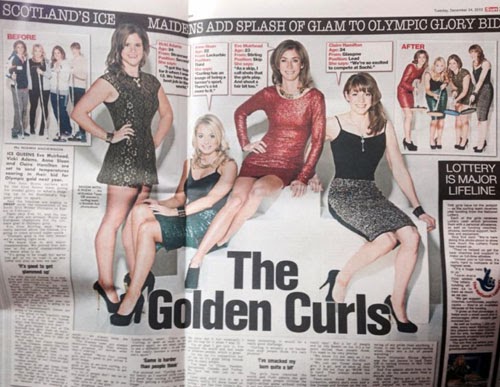 This spread, about the Eve Muirhead team in the run up to the Sochi Olympics, is from the Scottish edition of the Sun, from December 24, 2013. I wonder what curling historians will make of it when the article is found in the archives two hundred and seventy-three years from now, let's say in the year 2286?

The Ipswich Journal images are copyright The British Library Board, all rights reserved. The screenshots are reproduced from the British Newspaper Archive.
Posted by Bob Cowan at 09:49