One problem of growing old

Back in the eighteenth century, when it was not possible to travel far, curlers would only have had the opportunity to play against those from the neighbouring parish. These were the days before railways, and even getting to a neutral venue for a bonspiel involving players from two or more parishes would involve considerable effort. Later, when the train allowed curlers to travel further, horse and cart still provided the assistance to get the stones to the ponds, see here.

In some cases it is known that curlers walked considerable distances to take part in matches. Some reports describe players wrapping their stone in their plaids and walking to the pond to meet the opposition. The reference to plaids is just romantic nonsense, I would suggest. But just how would you carry your curling stone over a long distance?

Back then it would be a single stone that would be carried, as 'one curler - one stone' was the way the game was played.

The most likely scenario would be that the player put the stone in a bag, or more likely just a sack, and carried it over his shoulder. Or her shoulder, see below! 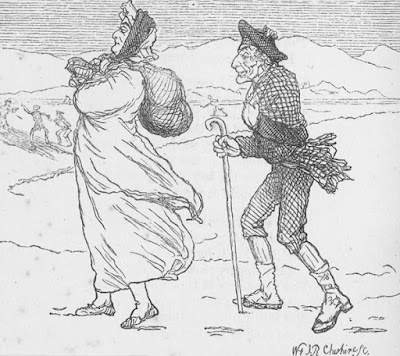 The suggestion that a single stone could be carried in a bag over your shoulder is backed up in a little story that has appeared in different places in the curling literature. The transcript below is from an 1884 book, Curling: The Ancient Scottish Game, by James Taylor. The incident described took place in Lanarkshire in the early years of the nineteenth century. A veteran 'knight of the channel-stane' had acquired great celebrity as a skilful skip, but he was growing old.

Taylor writes, "The announcement of a parish bonspiel fired the spirit of the veteran curler, but his failing strength made it impossible for him to carry his curling stone over a rough worn track two long miles to the scene of the action.

"I'm no able," he was often heard to mutter on the evening before the match and on the morning of the eventful day. The burden of the old man's song was, "I needna try't, I canna carry't."

"Could you do ony gude, gin ye were there?" inquired his wife, who was several years younger than her husband.

"Ay, that could I! was his ready rejoinder.

"My certie, ye's be there then," was her prompt reply; and forthwith tumbling the stone into a bag, the faithful matron heaved it on her shoulder, and followed by her husband halted not, till she deposited her load on the ice at the loch where the match was to be played.

"There, my bonnie man," she said, "play ye'r part, and gif ye win, my faith, ye's get some-thing gude and warm to ye'r supper the night," and home the courageous dame wended her way.

The result was that both the rink of her husband and his parish gained a victory to which the skilful play of the old curler contributed not a little. And many a good bicker has since been quaffed, first to the health and now to the memory of this model curler's wife."

It should be remembered that this was written in Victorian times, undoubtedly for a male readership, and would no doubt have brought a smile in that male-dominated society.

More seriously, the story does imply that, back in the day, your curling stone was a personal item, for your use alone. There was no consideration that the old skip could just turn up at the pond, and play with a borrowed stone. And you kept your own stone at home, and not at a curling hut beside the rink, presumably because it was such a valuable item. One problem of growing old would be that you weren't as able as you once were to carry your curling stone to the local pond!

But it is difficult to imagine the very large boulders, such as the Grannies, see here, or the Jubilee stone, below, being carried over any distance! 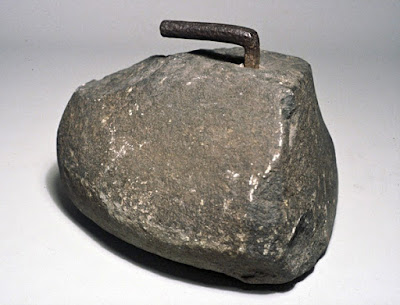 This stone was presented to the Royal Club in 1888 by John Wilson of Chapelhill, Cockburnspath, and we can assume that it had been used in that part of the country in years past. It may have had a name before 1888, but, as it was exhibited at the 50th anniversary meeting of the Royal Club, it became known as 'The Jubilee Stone'. It weighs 117 lbs (53 kg). Read more about named stones here.

The illustration by W J R Cheshire accompanied the story in Curling: The Ancient Scottish Game by James Taylor, 2nd edition, 1887. The photo of the Jubilee Stone is from my archive. It still belongs to the Scottish Curling Trust, see here.
Posted by Bob Cowan at 15:31