The brass band played on the curling pond 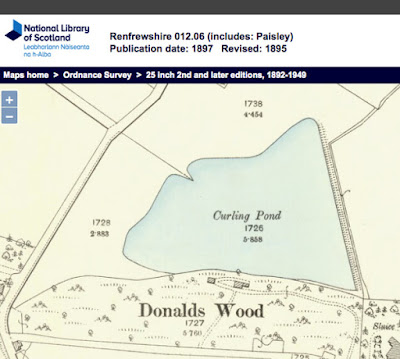 Wednesday, February 21, 1855, dawned cold and fair. The ice on Corsebar Pond was good. The curlers of Paisley were soon engaged in a bonspiel, those from the north side of the town playing those from the south side. Many came to watch.

A brass band was in attendance! According to the Paisley Herald and Renfrewshire Advertiser, the band 'enlivened the spectators by playing a number of popular airs'.

According to the newspaper report, "The curlers however were too intent on their game to listen to the strains, and each one seemed to be saying:

This was an early example of a charity match. The losers in each rink were to pay one shilling, and the winners sixpence, the funds going to benefit Paisley Infirmary which had only recently, in 1850, become a general hospital with medical and surgical wards.

The newspaper report concluded, "After a most friendly game, the numbers (at least so far as we could ascertain) stood thus: South 199, North 193, Majority for South six shots. Upwards of five pounds were realised for the Infirmary."

The venue for the match, Corsebar Pond, on the south side of Paisley, Renfrewshire, has a rather interesting history. At first glance it is just one of the 2391 places that are currently in the Scottish Historical Curling Places database, where there is good evidence of outside curling being played.  However, Corsebar is rather unusual, as it was not a pond which belonged exclusively to one club, as it was used by many!

Curling in Paisley has a long history. Aside from the tenuous evidence from an old protocol book what suggests some sort of contest on ice near the orchard of Paisley abbey in 1541 (which may or may not be a record of an early curling match), we can say with confidence that the game was being carried on in and around the town in the middle of the eighteenth century. In 1795, the Sandholes club had more than a hundred members. The Sandholes club was one of those which amalgamated to form the Paisley Union club in 1844. The Union was admitted to the Royal Caledonian Curling Club in 1845. The Paisley Iceland CC had been founded in 1841, joining the Royal Club the same year. The St Mirren CC was founded in 1845 and admitted in 1846. The Boreas CC was founded in 1852, and admitted that same year.

In the nineteenth century if a curling club wished to join the Royal Caledonian Curling Club it had to have somewhere to play. The first of the 'General Regulations' of the Royal Cub, as printed, for example, in the Annual for 1853-54, reads, "Any Local Curling Association shall be admissible into the Royal Caledonian Curling Club, if it consists of at least eight Members, have a designation, and sheet of Ice for its operations, and be governed by Office-bearers under a code of regulations." (My emphasis).

Clubs spent much money constructing and maintaining their curling pond. Rarely though do we find examples of clubs sharing their ice with another. 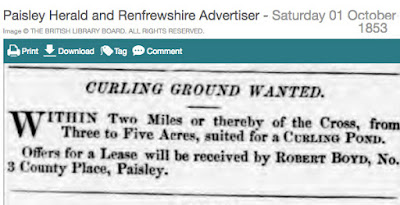 It seems that by the middle of the nineteenth century the curlers of Paisley were struggling to find suitable places to play! So bad was the situation that the advert above appeared in the local newspaper. Robert Boyd was the secretary of the Paisley Iceland Curling Club.

Robert Brown, in his History of Paisley, published in 1886, writes, "About the middle of this century the game of curling increased its votaries considerably and became very popular, but the curlers laboured under great disadvantage in not having near the town a commodious sheet of ice to play on. This difficulty, however, was overcome. The representatives of the different clubs made choice of a low-lying field on Corsebar farm, in the neighbourhood of Paisley, in which by the formation of an embankment a few feet high on one side a sheet of water extending to about eight acres might be obtained. During winter the water would be accumulated in the pond, and being run off in summer, the land would be used for raising meadow hay. The Earl of Glasgow, to whom the ground belonged, was applied to for permission to carry out this arrangement; and with his usual generosity and desire to encourage an excellent amusement, his Lordship readily agreed to the request."

As the Earl of Glasgow was Patron of the Paisley Iceland curling club the solution to the problem had been close at hand all along!

It seems that a committee of members from four clubs (Paisley Iceland, Paisley Union, the Boreas and the St Mirren) was formed to oversee construction and to run the pond.

The co-operation of the four Paisley curling clubs is unusual and few details of how this came about are known today, although the online history of the St Mirren CC (here) suggests that two of the clubs (St Mirren and Paisley Union) had previously shared a pond at Hole in Bush (or Holly Bush) farm in 1846.

Construction of Corsebar must have taken place rapidly.

The Corsebar Pond was officially opened in the first week of 1854, although, according to the Paisley Herald and Renfrewshire Advertiser of January 7, 1854, the first games on the pond had been played the previous Saturday (that would have been December 31, 1853) by members of the Paisley Iceland and the Boreas clubs. However, the 'official' opening was on Tuesday, January 3, 1854. Play began at noon, with five games between the Union and Iceland clubs. The Union was to win four of these. Players from the Boreas and St Mirren clubs were soon on the ice too, and two games were played between these clubs, Boreas winning both.

The day was a success. The newspaper correspondent writes, "The play amongst all the clubs proceeded with excellent spirit during the course of the game, and provosts, magistrates, and ministers of the gospel might be seen confidentially consulting with weavers and masons and plasterers whether a guard should be rubbed off or an inwick played."

The Renfrewshire Curling Club seems to have been founded as a result of the availability of Corsebar ice in 1856, and it too joined the Royal Club in 1857. This club also became involved in maintaining the pond.

Brown provides some more facts about the Corsebar Pond, which was still very much in use when he wrote his 1886 book, "The greatest depth of water in the curling pond is little more than three feet, and it is therefore safe from serious accidents. It affords accommodation for at least thirty rinks, and there is a cottage beside it which serves to store the stones and to give shelter to the curlers when required."

The 'curling house' had not been completed when the pond was opened in 1854. 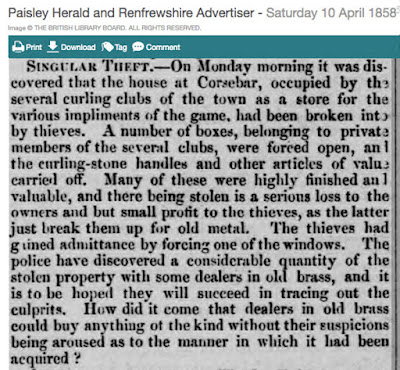 However, it had been completed by 1858, although it turned out to be somewhat insecure, as the above clipping shows.

Other problems that the pond committee had to deal with can be inferred from a paragraph in the Paisley Herald and Renfrewshire Advertiser on December 15, 1855. "We observe that the committee of the Corsebar Curling Pond have give notice that persons found skaiting (sic), sliding, or playing at shinty on the ice there, or trespassing on the gounds adjoining, will be prosecuted."

It was also noted that curlers who were not members of the Royal Caledonian Curling Club could obtain season tickets for five shillings, or day tickets for sixpence.

As well as being regularly in use by five local curling clubs, the Corsebar Pond became a 'neutral venue' for District Medal matches between clubs, the Royal Club promoting these from its inception. On February 1, 1855, for example, Anderston CC (from Glasgow) met Ardgowan CC (from Greenock) at Corsebar, two rinks aside, four players in each rink. This match resulted in a narrow win for Ardgowan 32-30, and the state of the ice on the Corsebar Pond was described as 'excellent'. The umpire was Archibald Sinclair, from Renfrew.

At least one other club used the pond regularly, the Sneddon CC. This was an old club, dating from 1815, although its minute books, which survive and are in the care of the Heritage Centre in Paisley, suggest a much earlier date for the club's beginnings. It was in 1815 when the club, with more than 100 members that year, was 'remodelled', and the surviving minute books date from then. These show that the Sneddon members played on a number of different ponds until 1855, when on January 24, the club met on the 'Corsebar New Curling Pond'. This pond became the venue of choice for the club for its matches until it was wound up in 1880. It would seem that the Sneddon CC never joined the Royal Club, for whatever reason, but the last recorded minute on January 21, 1880, suggests that most of the members had joined other clubs which were members of the Royal Club, and no longer wished to play in Sneddon competitions.

Occasionally, one of the regular users of the Corsebar Pond chose to play elsewhere. According to the Paisley Herald and Renfrewshire Advertiser of December 29, 1860, eighteen members of the Renfrewshire CC had met the previous Wednesday on Mr John Stirrat's pond at Nethercraigs, 'choosing it in preference to the Corsbar (sic) Pond', to compete at points for the gold medal that had been presented by their patron, Colonel William Mure of Caldwell. Just why Nethercraigs was chosen over Corsebar in this instance is not recorded, but John Stirrat was the Renfrewshire club's vice-president, so perhaps the reason was simply that he wished to provide hospitality to the club members on a pond at his own place of business, Nethercraigs Bleach Works.

Curling on the Corsebar Pond continued into the twentieth century. 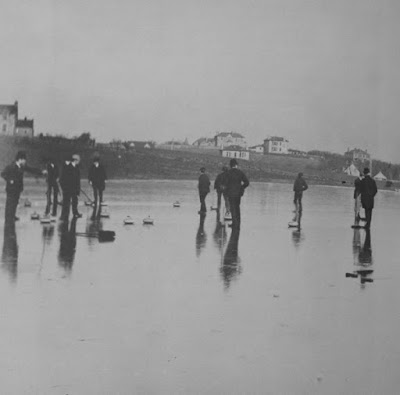 This image, from a glass negative found in the Strathclyde Archives in 1979, probably shows play on the Corsebar Pond. 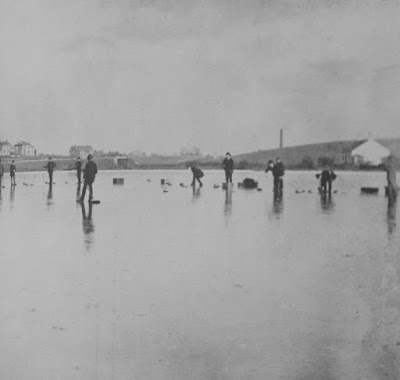 Here's more of that old image, and this shows just how large the pond was.

What of the place today? 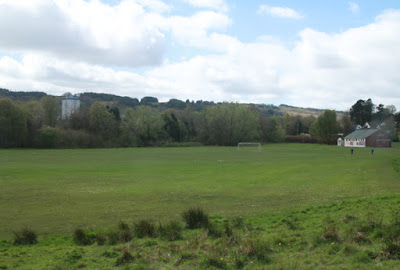 Visiting today one finds a flat sports ground, with a changing pavilion, in a primarily residential district. This is the view from the north east corner of the site. The trees seen here are part of 'Donald's Wood', the land rising behind up towards the Glennifer Braes Country Park. 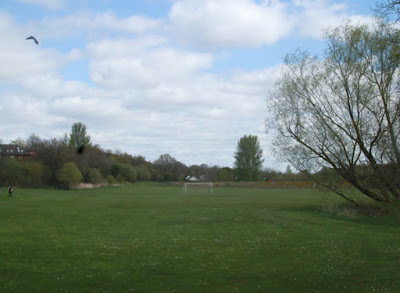 View from the south west. 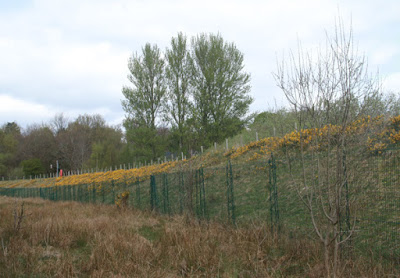 Along the east side of the site, the original embankment which blocked off the pond from the Espedair Burn has been enlarged and hides a secret. The old curling pond is now part of a flood prevention plan put into place following the Paisley floods in 1994. Should the run off from the Glennifer Braes to the south become excessive a sluice can be opened on the Espedair Burn turning the playing field into a storage area for excess water.

Thanks go to the helpful staff of the Heritage Centre at Paisley Central Library. The Sneddon CC minutes, and Robert Brown's History of Paisley, were consulted there. The British Newspaper Archive was the source of much of the information about Corsebar activities. The top image is a screenshot of the OS 25 inch map of the area from 1897, courtesy of the National Library of Scotland maps website, here. The black and white images of curling on what is likely to be Corsebar Pond came from a glass negative found in the Strathclyde Archives when they were based at the Glasgow City Chambers. The image was published in The Curling Companion by W H Murray. I have been unable to ascertain where the original is now. The recent photographs of Corsebar are © Bob Cowan. If it was not for the enthusiasm and dedication of Lindsay Scotland and Harold Forrester, who maintain the Historical Curling Places website, I would not be a 'pondhunter' and would be unaware of the Corsebar Curling Pond!
Posted by Bob Cowan at 09:51