There wasn't always a house 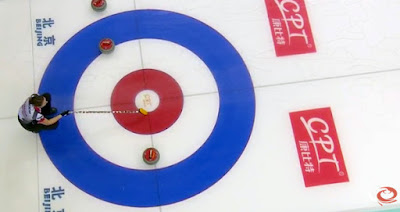 Curling these days is very colourful, and the painted circles at each end of the sheet contribute to making the game look attractive to those who are seeing it for the first time. The circles, the head, or the house, is that area which stones have to touch, or be within, if they are to be considered at the completion of an end of play. It may be a surprise to many that such a 'counting area' has not always been a feature of the sport.

The earliest rules of play, such as those of the Duddingston Club from 1811, show no requirement for circles of any sort. The only marks that were needed on outside ice were the tees - simply small holes in the ice at each end of a sheet - and the hogline, called the hog-score back then. This was defined in the Duddingston rules as, 'The hog-score to be one sixth part of the length of the rink distant from the tee'. Shots counted, as now, if they were closer to the tee than any of the opposition, but it seems that as long as they had crossed the hog, they were eligible to count. They did not have to be within any circles. (For those familiar with lawn bowls, this is not a strange concept.)

Such rules were essentially those adopted by the Grand Caledonian Curling club at its inception in 1838. By 1841, some ninety clubs had already joined, accounting for about three thousand members. The Annual of the Grand Caledonian Curling Club for 1841-42 records, "The Constitution of the Grand Club has this year been carefully revised. The adoption of a uniform system of playing, and the total abolition of local peculiarities, have been strongly recommended, for the purpose of preventing all sources of dispute."

In the Rules of the Game, in 1841, we find, "No stone to be counted which does not lie within seven feet from the tee, unless it be previously otherwise mutually agreed upon." The italics are in the publication, to emphasise that this was a new inclusion in the rules. Note too that the rule makers allowed an exception, that the 'counting area' could be ignored if both competing sides chose to do so. One has to think that the introduction of this regulation was somewhat controversial, and not all agreed with it, if such an exception was included.

There was still no requirement to scratch a circle on the ice.

How then did players know if stones lay within the fourteen feet diameter 'counting area'? One can speculate that, as play was usually the 'drawing game' and towards the tee, rarely would stones far from the tee need to be considered. Perhaps they kept a seven foot measuring stick on hand to check. Or perhaps a seven-foot radius circle was indeed scratched on the ice, even though this was not a requirement of the rules. 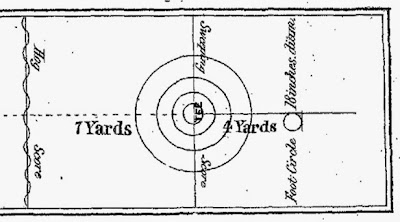 This duly happened, and in the Annual for 1854-55 a diagram of the curling rink was printed for the first time, part of which is shown above. The rules of play had been amended to read, "A circle of seven feet radius, to be described from each Tee as a centre, and no stone to count which is wholly without this circle."

The diagram shows other lines. For the first time we see a 'sweeping score', and a 'foot circle', this latter an early definition of where and how a player should stand when delivering their stone, discussions about which would occupy the Club's rule makers for many years to follow.

Note that the 1854-55 diagram shows other circles within the fourteen foot diameter 'counting circle'. These were optional and only there to facilitate measurement as was (eventually) made clear in the Annual for 1879-80 when the rule was amended to read, "Around each tee as a centre, a circle of seven feet radius shall be drawn. (In order to facilitate measurements, two feet and four feet circles may be laid down.)" 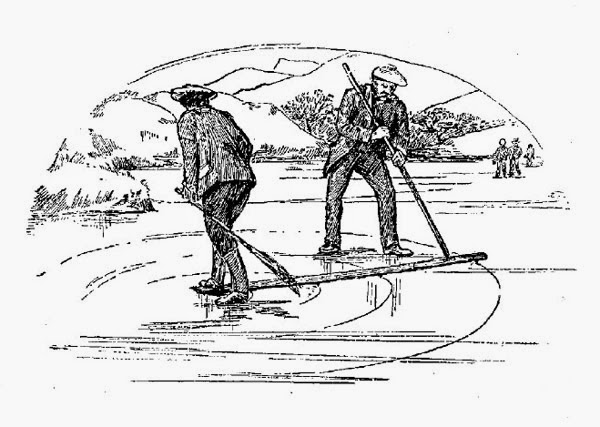 This woodcut illustration shows how the circles would have been inscribed on outside ice, the process known as 'tee-ringing'. It's a two person job. One curler holds one end of the marker in place over the tee, the other pushes the marker around, scraping the circles into the ice.

A fourteen-foot diameter circle remained officially the size of the house until 1938, when the Royal Club amended the Rules to make the circles just twelve feet in diameter, a measurement that Canadian curlers were already well used to. I have already written about that change in 'The day the house got smaller', see here.

In summary then, there was no 'counting area' of any sort until 1841, and no requirement for a fourteen-foot diameter circle to be scratched on to the ice until 1854. So that year is the date when it can be said that curling got its first 'house'!

Keen curling historians will know the first description of our sport came from the pen of James Graeme (1749-72). In his Poems on Several Occasions, publish posthumously in 1773, Graeme writes about curling. Actually, the poem was first published in 1771 in the Weekly Magazine. The lines which are relevant here are:

'The goals are marked out; the centre each
Of a large random circle ...'

What was this 'random circle'? Graeme was certainly describing something marked on the ice, but this was not a house or 'counting area' as we know today. The use of 'random' would not be appropriate if he was referring to a fixed diameter 'counting area'. These circles on the ice were sometimes referred to as 'broughs', and various clubs had their own rules which required circles, large and small, to be scratched on to the playing surface. The Peebles curling club rules suggested a circle just six feet in diameter, whereas the Abdie club required only a circle just two feet in diameter - an area this small could not possibly define a 'counting area'.

Broughs then were not the 'counting area'.

In An Account of the Game of Curling, published in 1811, the Reverend John Ramsay writes, 'The place for the rink being chosen, a mark is made at each end called a tee, toesee, or witter. It is a small hole made in the ice, round which two circles of different diameters are drawn, that the relative distances of the stones from the tee may be calculated at sight, as actual measurement is not permitted till the playing at each end be finished."

The term 'brough' is mentioned by James Bicket, Secretary to the Toronto Curling Club, in The Canadian Curler's Manual: or An Account of Curling, as practised in Canada: with remarks on the History of the Game. This was published in 1840. Bicket writes, "Round the tee, two or more circular lines are drawn, the largest having a diameter of about five feet, the others smaller and at intermediate distances. The space within the largest circle is called the 'brough'. The use of the circular lines is to shew, while the game is being played, the comparative nearness of the stones to the tee; actual measurement not being allowed until all the stones have been played to one end of the rink." Note that Bicket refers to the 'brough' being the space within the largest circle, and not to the circle itself. However, this did not define a 'counting area'. 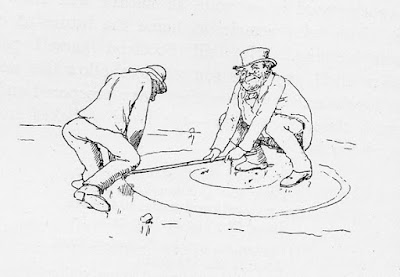 Illustrations of broughs are rare. This little vignette by Charles Altamont Doyle was included in the Rev John Kerr's History of Curling, and entitled 'Making the Broughs'. Doyle's scribed circles are not even six feet in diameter. Indeed, the circles seen in his larger paintings (here) are small in diameter. 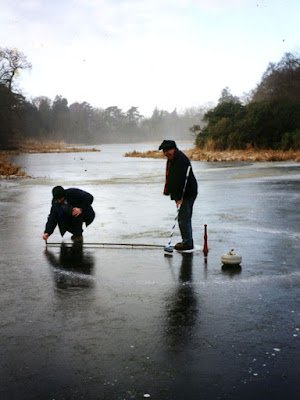 Tee-ringing is a job that still has to be done whenever ice becomes available for play outside. Here two members of the Troon Portland club are caught in the act, using - as current rules decree - a six foot marker! The date was January 20, 2001, at Coodham. 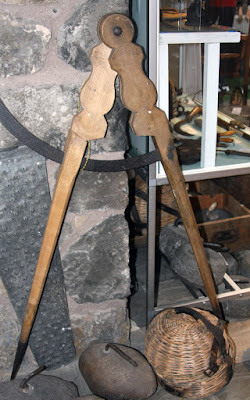 A final thought about measuring. If which stone was nearer the tee could not be determined by eye, some sort of measuring device would have been used to find which was closer. This could have been as simple as a length of string. But some clubs had large dividers like those above, preserved at the Fife Folk Museum in Ceres, as an elegant solution for making the measurements. Exactly when these were in use is not known, but John Cairnie used similar at Largs in the early years of the nineteenth century.

As curling moved indoors, colouring the circles became possible. But that's another story!

The top illustration is a screenshot from a World Curling Federation video of the recent CPT World Women's Curling Championship 2017. The diagram of the rink is from the 1854-55 Annual of the Royal Caledonian Curling Club. The tee-ringing image is from History of Curling, by the Reverend John Kerr, as is the Charles Altamont Doyle vignette. The Troon Portland CC photo is from my own archive, passed on to me by David Smith. It was taken by the Troon CC President Finlay Buchan, at Coodham in 2001. Thanks to Ian Mackin for this information. The photo of the dividers at the Fife Folk Museum was taken by me.
Posted by Bob Cowan at 15:52