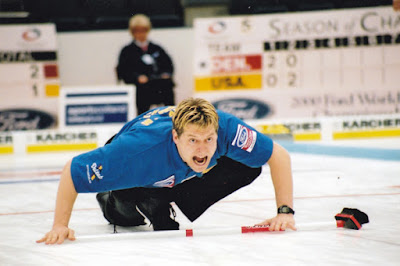 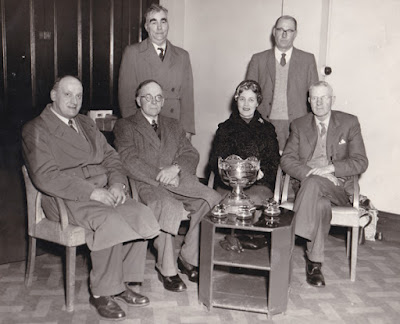 CIP-93. It must have been cold, or the winning curlers were just in a hurry to get going after the presentation! I have not been able as yet to ascertain just where this photo is from and when it was taken. Anyone? (9.5x7.5in print, Ford Photo Service, Glasgow.)

ADDED LATER: Thanks to Margaret Harvey and Andrew Dalgleish we know now that the trophy is the Durisdeer Trophy which is still played for by Dumfriessshire Province. It was 'presented to the Scottish Ice Rink Company by Wm Hendrie Esq 1955' and would have been played for at Crossmyloof Ice Rink until 1967 when it was transferred to the Dumfriesshire Province and played for annually at Lockerbie thereafter. William Hendrie is on the right of the photo. 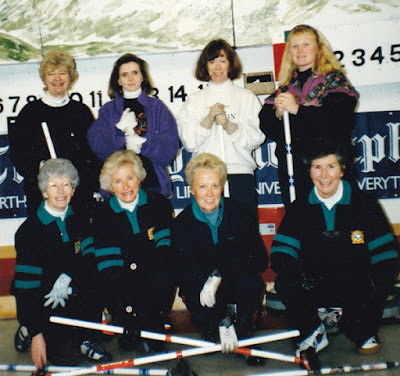 CIP-94. These are the two finalist rinks in the Greenacres qualifier for the 1994 Henderson Bishop. Back row L-R: Carolyn Hibberd, Linda McAulay, Alison McLennan and Rhona Martin. Rhona and her team had beaten the Millicent Copstick rink (front) to gain a place in the finals at Greenacres (their home rink), and they went on to lift the trophy, the competition that year sponsored by Stakis and The Daily Telegraph. (3.5x4in print, photographer not stated.) 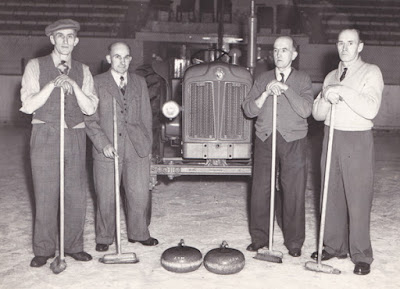 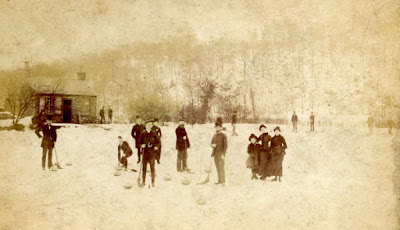 CIP-96. Another cabinet card from my own collection. Certainly from the nineteenth century, but where is it? There is no photographer's name on the card. (6.5x4.25in.) 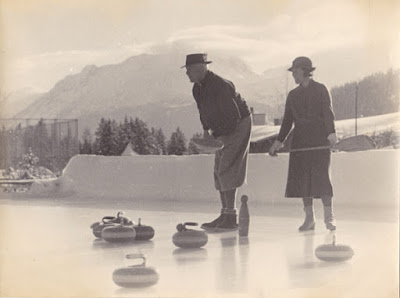 CIP-97. Somewhere in Switzerland, in the 1920s perhaps? The photo is not the sharpest, but is significant in that it shows a man and woman competing against each other. Note the dolly, and that they are both holding fabric covered brooms. (10x8in print, photographer not stated.) 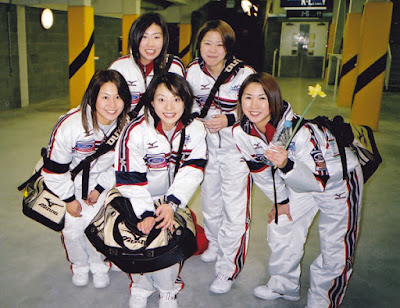 CIP-98. The Japanese women's squad were very happy for me to take this photo of them at the Ford World Championships at Braehead in 2000. The World Curling Federation historical results database has the names as Yukari Okazaki, Emi Fujiwara, Shinobu Aota, Eriko Minatoya, Kotomi Ishizaki. Can anyone give me a L-R in the photo? I wonder on the significance of the daffodil! (6x4in print, Bob Cowan.)

Check the archive (on the right) for previous Curling Image Project posts.
Posted by Bob Cowan at 08:40

I'm trying to access some information about a curling match that was reported in the London Observer 26 Feb 1938. The match was held in Cadgerhill Scotland between Stephen Young and his six sons and John Hamilton and his six sons.. The Young boys won the match. It is difficult for me to get a copy. Just wondered if you know how I can access information on this match.
I was able to download a bit but it is illegible in most parts.
Stephen, iâ€™r: i i s IJicii.i ,.|l ^ k in>!: mâ– ,-h: re ; also upon Isaac Wll-â– and Ã®11>â€¢ iri J lii.iwi...Young Rowton severally gave way a point, nor did the outlay of tme huudrcd and flity pounds leave Mnnc Adam in...Stephen Young, Farmer Cadgerhill, and six of Ins sons tin the one sule, and Mr. John Hamilton, farmer, High ("